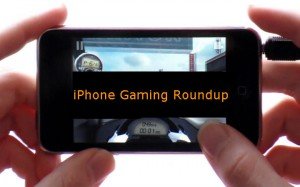 Hello, my name is Mike, and I will be covering the iPhone gaming scene for NGN in a weekly article series I’m calling “Mike’s Weekly iPhone Game Round Up”. Original, I know. Anyway, in this weekly news article, I will be highlighting various releases of the week, previewing upcoming games, and posting any other news of interest to those of us that game on Apple’s little hand held marvel. I will also be posting “mini-reviews” of various games as I play them from week to week.

Now, While I will do my best to cover the whole spectrum of iPhone gaming, hundreds of games are being released each week, so there is obviously no way for one person to cover each and every one, especially in a weekly news article. Plus, if you really want to see each and every game that comes out, you don’t need me for that. Just go to the app store and there they all are. No, my job is to pick out a selection of them that best represents the whole, and that is what I plan to do. I will cover the release of up to five or so of the most interesting games in each of the following categories: Action, Adventure, Board/Card/Dice, Puzzle/Strategy, as well as give more in depth reviews of the ones that I pick to play through.

If I left out a game that you think deserves to be covered or want a certain category covered more in detail, please leave me a reply and I will do my best to oblige. With the introduction out of the way, let’s look at some iPhone games!

This Week in iPhone Gaming News:

Skullomania in an iPhone game?

How many people remember Skullomania from Street Fighter EX? (Raises hand). Well,he is going to be in a multiplayer action platformer called Komodo Crunchtime: Ultimate Superstars being developed by RIE STUDIOS LTD out of London. They are currently in the process of a trying to get the game “crowdfunded” at www.indiegogo.com/komodocrunchtime, and they have quite a ways to go.

If you are a fan of the Pygmies from Bolt Creative’s Pocket God series, then you might want to keep your eye on www.funko.com, as they have just signed a deal with Bolt Creative to make a series of vinyl figurines and plushies of the popular characters including Happy Pygmy, Warrior Pygmy, Zombie Pgymy, and the Moon Witch, expected to hit store shelves in September.

If you are an indie iOS developer, you might be interested to know that Activision Publishing has joined forces with Flurry, Inc. to assist third party developers in the development and promotion of their games for iOS and Android. This “strategic relationship” will provide such developers “access to a large-scale customer base alongside best-in-industry development and monetization support.”

Featured Releases of the Week:

Action
Akane the Kunoichi- A visually appealing old-school style platformer where you play as a busty ninja girl.
iTunes link

Disco Kitten- A rhythm game where you play as a “robo-kitten” who is tasked with feeding a “giant, hungry head.” They had me at “robo-kitten.”
iTunes link

Olympic Zombies Run- Eat people and go for the gold all in one game!
iTunes link

Iron Suit Attack- Simple and nostalgic game that recreates those old LCD handhelds we played as kids (or at least I am that old). Plus it’s free.
iTunes link

Adventure
Evil Houseparent 1- Looks to be the first in the “Evil Houseparent” series? I have no idea either, but it looks like it could be a decent visual novel type game.
iTunes link

Shin Megami Tensei 2- Classic Japanese language RPG that is not only going for a whopping $13.99, but the developer promises to never translate it. Wait, what?
iTunes link

Cardinal Quest- Sleek and pretty roguelike game that will keep you bashing pixelated monsters for hours on end.
iTunes link

Adventurer- Free app that lets you create GPS based treasure hunts for others to play. Sounds cool to me.
iTunes link

Terrapets-Freemium game where you “gotta catch em all.”
iTunes link

QuestOfTime- Looks like a very intriguing game, but with a very bland presentation.
iTunes link

Okey 101- Rummikub clone. Not much else to say about it.
iTunes link

‘dillos- A colorful and cute looking puzzle game that I think has some explosions.
iTunes link