Zombie games have become the main staple of the horror gaming genre. Resident Evil, Nazi Zombies, Dead Rising, and Dead Island have all gone on to do good business, with each bringing its own unique type of undead to the video gaming table. Players are taken on an adrenaline-fueled journey of survival, pitting their skills against that of the walking apocalypse; these are fun titles, with enough variation in gameplay and narrative to keep the survival concept fresh, despite the often mindless repetition involved in sending hundreds of walking corpses back into their graves. PikPok‘s new iOS game Into the Dead takes its own approach to the typical zombie title.

Gameplay heavily resembles that of games like Temple Run: there’s no way to win, only a best way to lose by lasting as long as you can. You start the game as the survivor of a helicopter crash at the outskirts of a major city and—surrounded by snarling zombies—you begin to run for your life. The game is all first-person perspective: there are no gaps to jump, no sharp turns to navigate, and no jets of flame to slide under. There’s only you, the natural environment, and hordes of undead clutching at you with bloody fingers as you run. You can “bounce” off the undead—hit them in the side and your character will stumble, but ultimately keep running; however, smack directly into them, and you’ll suffer a swift, painful demise.

There are four control schemes for movement: using the device’s tilt controls, the sides of the touchscreen, or the thumbsticks on either side of the screen. Rather than buttons, you can use the touchscreen to fire your guns at any zombies in your way. In general, the controls feel a little clunky—the directional changes only control how your character drifts from one direction to the other—so you have to play smart and time your movements just right. So, if you don’t use your brain, you will lose it.

You can also start out with perks purchased with coins earned in-game.  Like almost any iOS title, you can immediately purchase as many coins as you desire via credit card, although you could easily earn enough points through gameplay alone.  There are four available perks:  ‘Armed Start’, where you start off with a random weapon unlocked; ‘Head Start’, which starts you out 1500 meters into the run; ‘Ammo Boost’, which gives you 50% more ammo on each weapon; and ‘More Crates’, which increases the number of weapon caches that appear as you run.  These caches are the only way to get different weapons or refill ammo if you run out.  With each run, you earn more coins by completing challenges, usually based on total distance achieved or number of zombies killed. 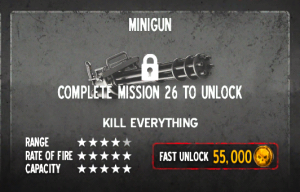 Challenges are also a great way to unlock new weapons, although there is a ‘Buy It Now’ option—be warned, buying weapons is quite expensive. The first weapon for purchase is the old standard: a reliable pistol with an ammo count of 12, which can be boosted to 18 with a perk at the start.  The next weapon is a chainsaw, followed by a shotgun, with many other weapon types to unlock.

PikPok has promised fans more gameplay modes to come on top of the standard running-and-gunning: currently locked, the two other modes are ‘Massacre’ and ‘Hardcore’. There’s also a locked perk called ‘Companion’, which appears as an image of a German Shepherd, promising a future faithful companion to help with your zombie killing mayhem.

The game features an online leader board, showing the scores and achievements of either everyone playing the game or just your friends, depending on your preference. If earning a world ranking is your goal, then check the leader boards regularly and monitor your progress.  Whatever your reason for playing—whether it be world renown, terror, a rush of adrenaline, or just some good ol’ fashioned zombie killing—you’ll find Into The Dead to be quality gaming. It’s currently available for free on Apple App Store for iPad, iPhone, and iPod Touch. Happy hunting!

This review is based on a retail copy of the iOS version of Into the Dead developed and published by PikPok.