Child of Light did exactly what I wanted it to do. This fanciful tale brought me to another world where wondrous creatures lived and magic was possible. Within the first couple minutes I was already hooked by the artistic presentation alone. While that is undoubtedly the reason why it has been so popular before it was even released; the old-school turn-based gameplay is extremely addicting on top of it. Child of Light appears to be a very simple game, and in some ways it is, but to claim there are no deeper complexities is completely untrue. Child of Light delivers everything it promises and I cannot get enough of the remarkably enchanting world.

The story starts with stain-glass windows depicting the characters with a narrator setting up the plot. An Austrian Duke and his young daughter are happy together until the Duke decides to remarry after his previous wife dies. Aurora goes to sleep one night and wakes in a dream land called Lumeria. She believes it is a dream, but slowly understands this is anything but a dream. Aurora and a colorful cast of characters must embark across the bewitching land to save it from the darkness.

The story is not the best narrative of the century, but it is enjoyable, and exploring the world of Lumeria is a real treat. There are plenty of imaginative creatures and landscapes that really suck you into the world. Not to mention the fairly entertaining characters as well. Aurora is a mischievous child that must grow up, which admittedly is a pretty typical main character stereotype, but she is still very likeable. More creatively there is a depressed Jester, a scared dwarf, even a mouse that is constantly trying to make a profit, plus some others. There are more characters than I expected, and each one has their own traits which make them entertaining. What brings all the characters and setting together is the writing, which if you didn’t know, is completely in rhyme.

I will admit, there were moments the rhyming structure seemed like a reach. There were multiple times when it fell flat, but I shrugged those moments off. Overall, the rhyming was great and told the story expertly. It was creative and helped immerse you into the fanciful world even more. Not only that, but it gave the story a special flow and majestic movement to every scene. The rhyming was even incorporated into the narrative giving added pleasure. One character had trouble rhyming and she ruined the flow of the game. This aggravated the other characters as they would constantly correct her with the proper rhyming word. So the flow of the story takes a hit, but it earns a small laugh and gives Child of Light even more charm.

The rhyming narrative and the entertaining characters would be nothing without the shine of the presentation that Child of Light has been recognized for. Child of Light is absolutely beautiful. The UbiART Frame work takes real concept designs and puts them in the game. The entire game looks like a watercolor painting. You can even see the brush strokes of the painter. The artistic style is easily one of the biggest positives and every new location was eye-opening. Not only does this give you detailed backgrounds and landscapes, it brings the presentation to another level that is rarely seen in gaming.

Once again, Child of Light uses this presentation feature in its narrative story. Aurora is done in 3D because she isn’t from Lumeria (my guess that’s why anyways). It’s a nice difference to set her aside as something special, but she doesn’t stand out in any negative distracting way. She still looks as enchanting as the rest of the game, especially with that flowing hair. In fact, everything has a flow to it, from the characters’ battle movements, to the background scenery, and especially the flying. This may be a small detail, but it adds to the overall vibe Child of Light radiates, and that vibe is what will strike you inside.

What really adds to the overall presentation is the wonderfully performed music. A majority of the time the music is simple, just like the rest of the game. A quiet piano melody here or a soft flute that really lets the mood sink in, but then during a boss fight a choir belts out along with a robust orchestra to really get your blood pumping. The world of Lumeria would not have been nearly as enchanting if it wasn’t for the music. It fit the mood, matched the atmosphere, and really engaged you as the gamer.

All this flow, charm, music, and beauty carry to the gameplay as well. Child of Light follows the standard JRPG formula, with level progression, skill trees, each character with their own specialty, and that familiar turn-based combat. Even though the game is in 2D, there are plenty of areas to explore. The levels are designed to still have 3D elements so it doesn’t feel like you are on the same plane even if technically you are. The game is larger than you might originally think and there are plenty of places to explore to find hidden secrets. There is fun in exploring and finding as many chests as you can, but engaging in battle makes Child of Light shine even more.

The monsters wander the world and touching one will bring you to a battle screen. Like I said, the combat is turn-based, but with one unique twist. As with most turn-based combat there is a bar that fills before your character can perform an action. That holds true for Child of Light, but there is also a “cast” section at the end of the bar. You pick the action you want to perform in the beginning of this section and your character will carry out the action at the end of it. Getting hit while you are in the “cast” portion of the bar will cause you to be “interrupted”. You do not complete your action and are sent back on the timeline.

The premise may be simple, but it is pretty ingenious in its simplicity. One could argue the entire combat revolves around speed and proper timing. Skilled players will be able to time all their attacks so enemies may never get the chance to do anything. They will constantly get interrupted and sent back on the timeline. Unless they have spells enacted which prevent them from being interrupted, or maybe they have a counter attack when they are interrupted so you will think twice about doing it. The entire combat hinges on this system and it was fun from the first battle to the very last.

One of the most important abilities in combat is utilizing your firefly friend Igniculus to slow down enemies. He has a bar that depletes whenever he shines his light. Keeping that bright light on an enemy slows them down on the timeline, which makes it one of the most useful abilities in the game. He can also heal your character if he shines on them instead. Outside of combat he helps you open chests, complete puzzles, gather items, and even blind enemies for you to sneak past. 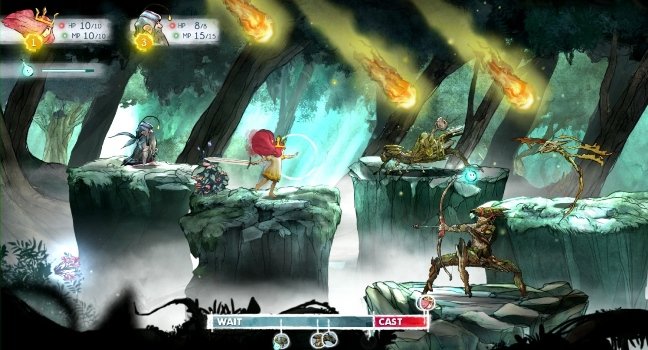 The combat may have a straightforward principle, but one misstep and things can get ugly fast. There were multiple battles that I attacked the wrong person, or mis-timed something, and the next thing I knew my characters were interrupted. One of them also was hit with a spell that slows their speed and soon I was fighting an uphill battle. The combat always makes you pay attention and rarely was I ever able to spam the attack button without worry. That doesn’t necessarily mean the game is hard (on normal that is), but at the very least, you do need to pay attention to what you’re doing.

Igniculus isn’t the only thing that will aid you in battle. There are also oculi that will grant you extra buffs. Once again, the basic principle is simple. You have three types of oculi: ruby, sapphire, and emerald. You can synthesize them to make them more powerful and new types of oculi. Three rough rubies will make one tumbled ruby that has more power than the rough ruby. You can also combine ruby and sapphire to make amethyst that has some different status effects. There process isn’t complicated by any means, but there is some surprising depth to be found.

Child of Light is wonderful, but not perfect. There are no major flaws that break the game, but there are small things that would go a long way to make the game better. There are puzzles you will come across, but they can barely be called puzzles. Childish match-making at best. There is only one save file. That is an oddly outdated concept and I was upset I couldn’t have multiple playthroughs to switch back and forth between. There were also a couple story elements that were not explained fully or elaborated enough on. The irony is I can’t elaborate on them myself without spoiling anything, but they did distract from the story briefly as I wasn’t fully satisfied with what happened. The game also doesn’t punish you enough when it should. I fought every battle with a surprise attack, and if I was ambushed, I would flee then renew the battle with it in my favor. There were no repercussions for fleeing and it works every time, so might as well do to it if you didn’t start the battle the proper way. 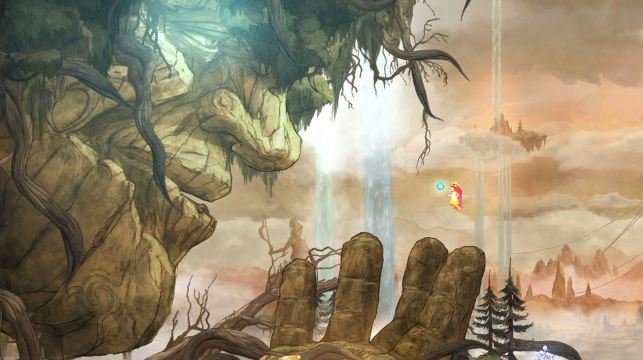 Child of Light is not the RPG to end all RPG. This isn’t a hundred hour saga that you will play for months without fully experiencing everything. I beat it in about ten hours, but I didn’t stop playing it once I finished the story. I was too drawn in by the beautiful world, majestic music, and the magical tale. There is always something about childlike fantasies that can still strike an adult inside and Child of Light has that ability. Everything about Child of Light has a simplistic enjoyable flow, but then you discover the real depth within, and it becomes truly addicting. Any fans of traditional RPGs or fairy tale stories should definitely pick up this title. Child of Light is a charming gem that finds a way to shine brightly as being different yet familiar, but unquestionably memorable.

This review is  based off a retail copy of the playstation 4 version of Child of Light developed and distributed by Ubisoft Montreal.