One thing I admire about Japanese developers is that they always take risks in making their games to add experiences that are unlike any other. Using controversial themes, like violence and sex, which were never seen before in games, it pushed the boundaries of storytelling and used mature elements to tell unique stories that propelled the games to greatness. While some of these risks have helped deepen some experiences, some games took risks that ended up dragging the game down from what it could have been.

Monster Monpiece earned its reputation well before its release with trailers exposing the game’s very graphic sexual gameplay that quickly intrigued and offended gamers worldwide. Hidden underneath its incredibly immature handling of the sexual content is a card battle game that’s fast paced, simple, and fun on the go. It’s a shame that developer Compile Heart felt the need to try and differentiate itself with these themes, because the game could have been much stronger without them.

You’ll enter the role of May, a not-so-confident student at an academy that focuses on mastering the use of “monster girls.” Monster girls are beings that co-exist with humans who train to use summoned cards of monster girls to fight. When one of May’s friend Elza gets her mind taken over and becomes “lost,” which pretty much means they’ve gone full on evil, May decides to collect the Magus Quartzes, which are filled with immense power, so Elza can’t use them to gain power.

The story isn’t anything to lose yourself in, but it gets the job done. It’s interesting enough, but the game feels the need to add awkward or forced moments to try and bond characters together through their journey, but it seems more like a bad sitcom than nicely constructed bonding scenes. It’s a good thing the overarching plot is simple, because it can be hard to follow the subtexts or side plots brought up in the game, because sometimes the conversations never seem to end. The characters are nicely drawn, but no one’s personality shines and becomes interesting enough to become invested in. 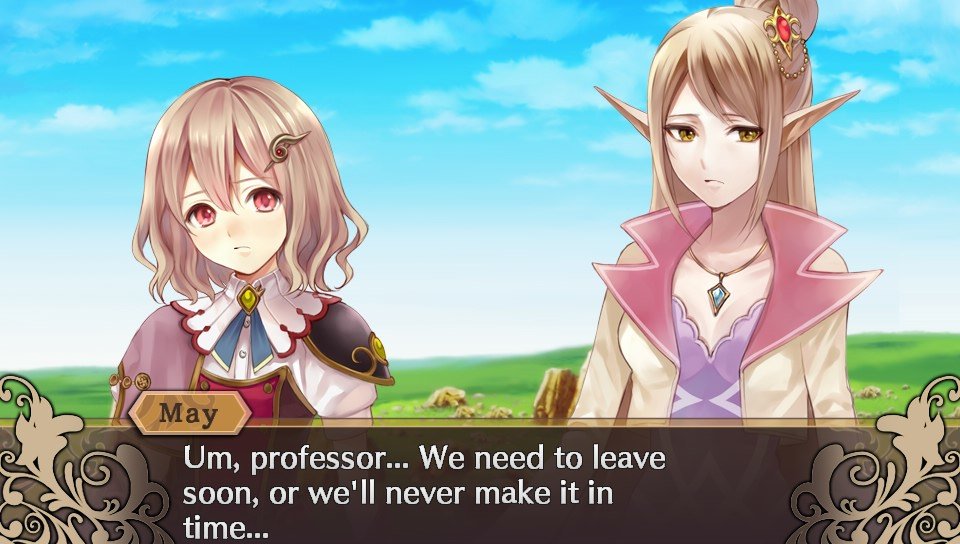 The game is still entirely in spoken Japanese, but it does have subtitles at the bottom, though I did notice a lot of translation errors or misused words that didn’t make sense to read, at times.

Monster Monpiece features a really interesting mix between Fire Emblem and card battle games like Hearthstone. The game begins on a grid, with a nine by nine grid given to each player with a 1 by 3 grid separating the two. Only the grid’s player can spawn units from drawn cards on their own grid. Each player’s respective turn will end in their units moving up a single space toward the enemy’s grid. At the end of each player’s grid is a castle, and once that castle’s heath reaches zero, that player loses.

With how little the grids are, the matches go by pretty fast, which is a nice ability when you want to play a quick level on the go. The game’s simplicity is beautiful, because it’s fast to learn, and when enough time is spent, strategies start to form which will make battles easier to win. 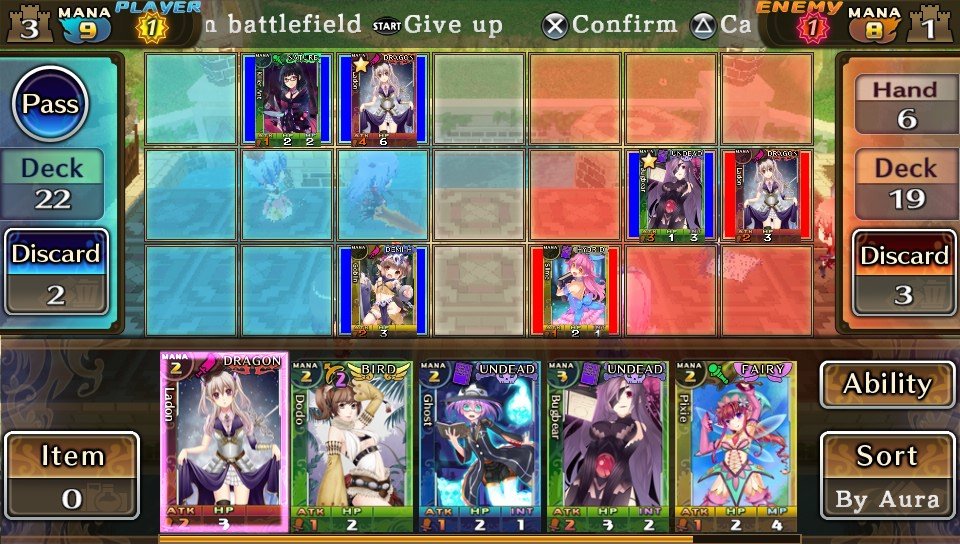 When selecting your card to play, you’ll place it on your grid, and then a 3D model of that character’s class will appear on the battlefield. The visuals aren’t impressive, but it’s a nice addition for a card battle game since they often lack any interesting story device.

There’s only four card types in Monster Monpiece: melee, ranged, buffer, and healer. Melee cards usually feature high attack and/or health, which are generally placed near the front of the battle to make a way toward the enemy castle. Ranged units are nice to put in the middle of your grid so they can stop enemies from getting any closer,but their only problem is that they generally have decent attack but low health. Buffer units can be placed behind any friendly unit, and they’ll increase the power of their attacks based on their intuition number; for instance, a buffer card with two intuition will increase the attack of the unit in front of them by two. Lastly, healers do exactly what you’d expect: they heal. Putting a high level melee card in front and also summoning a high level healer to heal constantly can change the tide of battle at any time. I ended up using this strategy for most of my time with Monster Monpiece, but having more powerful cards and forming decks up to 40 cards that you can customize to your liking with any unit combination makes it fun to test out certain card configurations.

In order to upgrade your cards to higher attributes, you must initiate what the game calls “First Crush Rub.” Now, this is where the game earns its infamous controversial connotation, and for good reason, because it’s completely unnecessary and borderline perverted. When prompted, you’ll have to hold the Vita sideways and poke and rub tender parts of your female card’s body to raise a meter that when it reaches its limit (or “excitement”), your card will level up and grow more powerful. Not only does your card become more powerful, but the character will then lose clothing and will visually be in more erotic outfits. 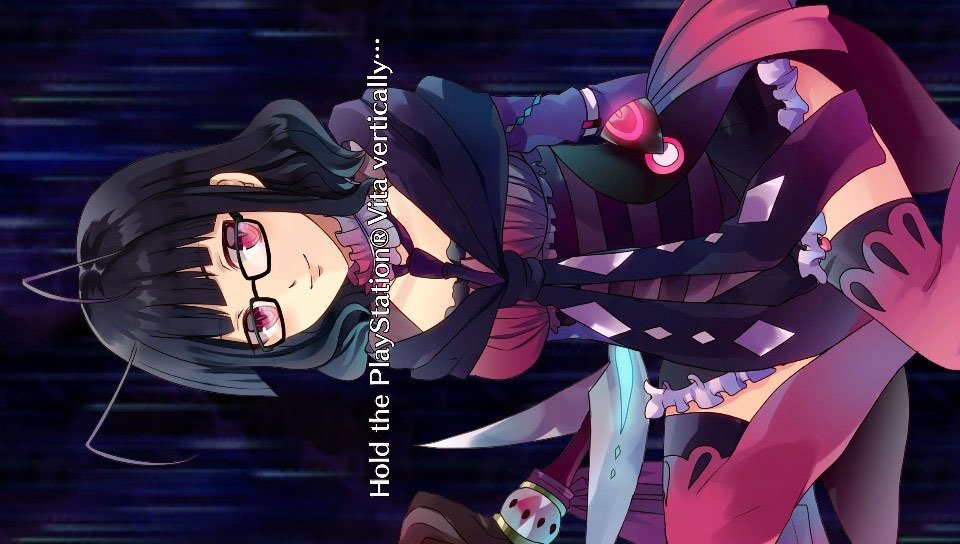 Rubbing female characters is how you upgrade cards – seriously.

This review is based on a review copy of the PlayStation Vita game Monster Monpiece by Compile Heart and distributed by Idea Factory.