Going into the Tomb Raider reboot was nerve-racking.  Was it going to be good?  Was it just an amazing marketing campaign and the actual game was going to flop? Often times, if something is hyped up too much, the end result leaves a less-than-satisfying taste in that proverbial mouth. Rest assured, though; from the opening scene, Tomb Raider digs its claws into you and never truly lets you go.  Within the first five minutes, you are already crawling through a terrifying, sacrificial cave, severely bleeding, with only one thought on your mind: survive.  It’s an intense thrill-ride that never lets up.  One moments spills right into the next; it feels like an endless, downward spiral, and the only thing you can do is ride along, hoping you come out on the other side alive. 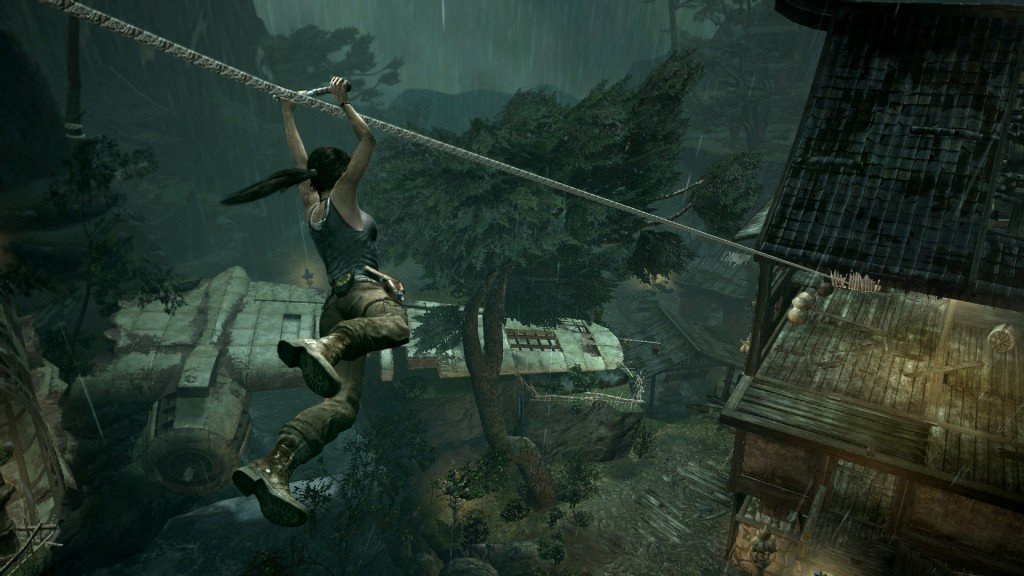 For anyone that doesn’t know the story by now, it can be summed up pretty quickly. Lara is on an expedition with some fellow journeyers to find the ancient city of Yamatai.  Within the first two minutes of the game, the ship crashes and you are stranded on a strange island.  It doesn’t take long to figure out the inhabitants are a little less than friendly, and soon, the expedition becomes a nightmare of survival.  Nightmare may even be an understatement, since you have to go through some absolutely horrific situations, and it touches you deeply to witness what someone will endure to survive.

Possibly the biggest worry in everyone’s mind is the new Lara.  Have no fear, she’s an amazing recreation of the famous heroine.  As you uncover tombs and artifacts, Lara will quickly rifle off some facts about the discovery.  Not only does it grant you a little more information about the surroundings, but it also shows how intellectual Lara actually is and how she is an archaeologist at heart. She has instant personality without relying on the nostalgia of old games to carry her through this reboot.

You’ll fall in love with her almost instantly as she radiates a familiar, yet new atmosphere.  In the beginning, she’s this terrified, poor girl wrapped up in a horrendous situation that she just wants to get out of.  However, as the game goes on, there is this slow but strong transformation in her character.  This gives her an incredibly realistic feel as a character that progress from start to finish, which stands in stark contrast to many protagonists who don’t change even the slightest, no matter the situation they are thrown into.  Sadly, the other characters aren’t so well done.  Each one has an obvious, cliché archetype.  You have the nerdy white guy, the edgy black woman, the peaceful Hawaiian guy, the fatherly mentor, and even a fallen man looking for redemption.  It’s a little upsetting how unoriginal the side-characters are when Lara herself is so well done.

What is also spectacular are the wonderful graphics and incredible detail.   The varied landscapes are eye-appealing, and you’ll often pause to gander at the beautiful scenery.  The authentically intricate details incorporated into this game are mind-blowing to think about when you’re inspecting the ancient wonders of the island.  Even just the various pots on tables are well done to give the game an overall completed feel, but don’t think it’s as simple as placing a few pots at random locations.  The touches of light from the torch in a dark cave create wonderful shadow effects, and the way Lara trudges through waist-high water is just satisfying in an utterly realistic way.  Similarly, Lara interacts well with the environment overall, from placing a hand on a wall that’s near her to scrambling on all fours when trying to dodge an attack.  The smallest things often make a game, and Tomb Raider has made sure even the smallest of details were well done.

The island itself plays a major factor in bringing this game to life.  Yamatai is superbly created to breathe further life into the game.  There is constant wildlife running around, streams cutting through landscapes, distant mountains surrounded by endless sea, and let’s not forget the dark, mysterious tombs.  The island just feels real.  There are years of historical facts embedded into the island for you to discover that cause the fictitious lines to blur into the realistic ones, and it ultimately serves to draw you in even more.  Take great graphics, add in a deeply intricate musical score that sets the mood just perfectly, plus, no HUD to get in the way, and you have one unbelievably immersive setting.

Tomb Raider isn’t just a pretty game; it also plays amazingly well. It’s a third-person shooter that fuses three combat modes: stealth, melee, and cover-based. The controls all feel smooth and there are no problems while playing the actual game. But that’s the boring explanation of what it is. In truth, Tomb Raider is an absolute blast to play, because it takes the general understanding of the basic gameplay mechanics needed in a third-person shooter and tweaks it to perfection. Lara will automatically hide behind cover without pressing a button or attaching herself to a wall like she was magnetized.  This cuts out that annoying process of sticking to the wrong wall or having a hard time detaching from that wall. The enemies you fight vary in skill and equipment, so different tactics are needed as you proceed, which prevents that repetitive feeling of shooting the same person throughout the entire game. Admittedly, an arrow to the head will often do the trick, but it at least provokes you to act differently from time to time. Add in vertical combat, creative environments, some nice touches of gore (especially death scenes), and you have one hell of a fun game.

Lara is given a wide range of tools to work with, which not only help her navigate the environment, but also brutally massacre her enemies in satisfying ways.  A rope attached to an arrow can help you cross a gap in the terrain, or you can shoot the arrow into an enemy and then yank him off a ledge for a more rewarding feeling. You aren’t stuck with the bow alone: you will also unlock a handgun, automatic rifle, and shotgun as the game progresses.  Each one has their own obvious tactical use for a given situation.  You can also upgrade each weapon by collecting salvage throughout the game.  It isn’t as deep as it could’ve been, but you will still scrounge the corners of the maps looking for salvage because you’re just so close to getting that next upgrade.

Weapons aren’t the only thing you upgrade in this game.  Lara herself gains experience throughout the game when you do just about anything, from shooting an enemy to looting a food storage box.  It’s a wise incentive system, since the flashier the kill, the more experience you will get.  It makes you strive for head-shots to receive just that little bit of extra experience.  Once you level up, you can unlock a skill from three different categories. This gives Tomb Raider more individualism by letting people choose what skills to prioritize over the others.  One skill will allow you to take more damage in battle, but another skill allows you to pick up previously shot arrows from dead bodies.  What’s worth more?  There are positives and negatives to both. That being said, a few more skill choices would have been nice because, as it stands, the level progressions feel somewhat shallow.

To extend the hours of this amazing campaign there are tons of collectibles and challenges.  There are plenty of documents and relics scattered about to give a deeper understanding of everything that is happening in the game. There are also optional tombs to explore and small challenges to complete as well.  It will keep you busy if you’re into collecting everything, but if you aren’t, don’t worry: there is a multiplayer to experiment with after the thrilling campaigning.  Surprisingly, it’s highly addicting and wasn’t just an afterthought tossed in at the end for promotional purposes. The complete experience from the single-player has been ported expertly to the multiplayer realm. Everything you can do with Lara can also be done with your character online and then some!

On the downside, there are only four modes, and nothing new: Team Deathmatch, Free-For-All, Rescue Mode (one team grabs med-packs and returns them to base), and Cry for Help (controlling territories).  Each mode has a Tomb Raider twist, of course, and that’s what makes them so much fun.  Each map is well done, with multiple layers, tunnels, and features that incorporate wonderful vertical combat.  Each round is intense: people sliding down zip-lines, climbing up rock walls, baiting you into rope-snares, setting spiked-wall traps, and there’s always that pesky bow and arrow to watch out for.  It is really addicting, and it’s clear that a lot of time was put into the multiplayer.  Sadly, it definitely has problems.  Everything mentioned above is true, but only when there are enough people playing.  A majority of the time, it’s hard to get into a full lobby.  Playing a 2 v 2 round is honestly just plain boring.  It’s hard to find each other with the complex maps, and it just doesn’t contain the same amount of chaotic, intense joy.  There are also some bug issues, which will hopefully be patched with a little more time.  The multiplayer is a blast, but only when the right elements are there. 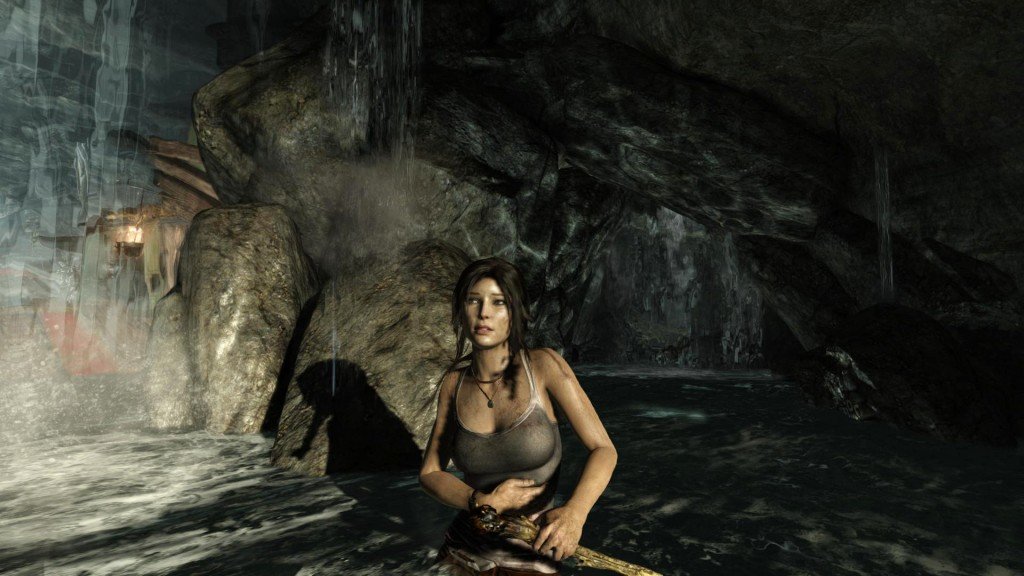 The game is great on almost all accounts, but there are a few flaws besides the ones already mentioned. The best fighting moments in the game are when there is a lot of space to work with, allowing you to be more creative. That’s why it’s disappointing when the game constantly puts you in a very small area and sends a lot of enemies at you.  There isn’t much creativity or use of the environment in those cases.  Also, shooting a weapon will alert the enemy to your exact position, even if you are completely out of sight.  As soon as that one bullet leaves your gun, every enemy in that area knows exactly where you are.  Another small issue is the lack of a blind-fire; while that isn’t technically a problem, it would have been a welcome feature in this game, not to mention extremely helpful.

Rebooting a popular franchise is a daunting task, one that is riddled with countless risks of being hounded by a die-hard, loyal fanbase who have their fingers readily placed on their keyboards, itching to flame the developers for ruining their favorite series.  Happily, I can strongly say this game has succeeded on all fronts.  From the setting to the gameplay, everything just fits nicely together to produce a wonderful experience.  This isn’t just another game with the Tomb Raider title slapped on.  It’s a game that can strongly (and maybe a little proudly) stand on its own as a remarkable title.  The gritty story of Lara’s first adventure is a wild-ride of action, horror, and survival all mixed together to truly give the player a wonderful experience.  If you’ve never been into Tomb Raider, now is a good time to start, and for you cantankerous fans who hate change, don’t be foolish enough to pass up this title.

This review is based off a retail copy of the Playstation 3 version of Tomb Raider developed by Crystal Dynamics and distributed by Square Enix.

Did you like this? Share it:
A Survivor Is Born | Tomb Raider Review
Overall Score9
Positives
Negatives
9Overall Score
Reader Rating: (0 Votes)
0.0