I recently had a “shut up and take my money!” moment upon hearing about the announcement of Batman: Arkham Knight. I loved Batman: Arkham City a lot, so much to the point where it is among one of my favorite games of the last console cycle. With more details coming in about Arkham Knight, I thought I would share my top 5 reasons I’m pumped for the game and quite frankly, you should be too.

Top 5 Reasons to Get Excited For Batman: Arkham Knight (So Far)

5) End of the Storyline
In a sense Arkham Asylum was Rocksteady‘s introduction to the world, showing off just how good superhero games can be. Arkham City refined a few qualities and expanded upon the success spawned from the madhouse, and even killed off Batman’s greatest nemesis in the Joker. Even knowing that was Mark Hamill’s last performance as the Joker adds something special to that game. While Arkham Origins, may not have added anything new on a technical aspect, the story of a younger Batman finding his way added a little more depth not ordinarily offered in the other games. So it came as a little bit of a surprise when Rocksteady announced Arkham Knight would be the last in the Arkham Series. With that, for fans of the Arkham series and Batman fans alike it will be interesting to see how this ultimately culminates.

4) New Character(s)
Knowing we’re going into the end of the storyline in the Arkham series, Rocksteady recently showed off a screenshot of a new character called the Arkham Knight. As we can see in the picture (below), he’s got Batman in a compromising position, but it’s still unclear as to whether the Arkham Knight is an ally or an enemy. More details will be unveiled in the future. Still, other characters have gotten a little bit of a makeover, and who knows what other notable (or obscure) Batman villains will be unveiled in the future. 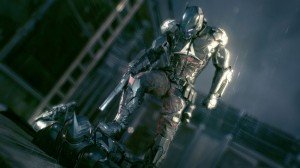 3) Bigger Map
Unlike a few other games being released this year, Batman: Arkham Knight will be exclusively for the new cycle of consoles and the PC. Rocksteady is ready to harness the potential of the Playstation 4 and the Xbox One. Arkham Knight is said to have a map up to five times larger than Arkham City and fit three or four times as many thugs into the game. This means a much bigger area for Batman to assert his dominance in the mean streets of Gotham City.

2) Batmobile…And Other Toys
However you could be thinking, “But Arkham City was kind of big, and it took a little while to get from one place to another.” True, but have did we talk about how the Batmobile is now in the game? While this will be a solid way of transportation, it will be interesting to see how it is utilized in the game. One other notable thing that makes Batman such an iconic superhero is all his wonderful gadgets. Hopefully, we’ll get to play with more of Bruce Wayne’s expensive toys to beat up on some bad guys.

1) Rocksteady Is Back At The Helm
I cannot express how happy I am with the notion of Rocksteady developing Arkham Knight. This isn’t to take anything away from Warner Bros. installment in Arkham Origins. As stated a little earlier lot of reviews conveyed the same message; calling the game average, not taking away a whole lot from the game. This time the developers behind Arkham Asylum and Arkham City, are behind the helm here. They’ve developed a great reputation with the fans with the first two games in the series, so it stands a good chance Arkham Knight will live up to what was built up in those first two games.

I cannot express how excited I am for Batman: Arkham Knight more than going into my local video game retailer and badgering them about if or when a special edition of the game is going to be released. Now it’s your turn to sound off, what are you most excited for in the next Batman game? Do you think Arkham Knight will live up to the hype? Let us know in the comments section below, or let us know on our Facebook or Twitter pages.