The Disgaea series is back and ready for action once again, this time on the PlayStation Vita, in the form of a Disgaea 4: A Promise Revisited. The original game, as well as all of the previous games in the Disgaea series, provides hours upon hours of hilarious dialogue, randomness, and that SRPG customization addiction that I crave. In fact, take the already fantastic original version, add some new spells, new gameplay mechanics from D2: A Brighter Darkness and Disgaea 3: Absence of Detention, and some more detail into the back-story between two of the key characters, and you got yourself Disgaea 4: A Promise Revisited. 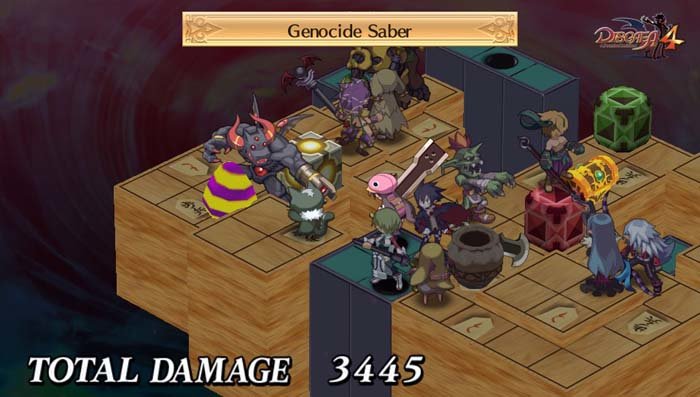 As I have said in the past, I don’t usually play Disgaea games for their story. That being said, I actually do enjoy the story in D4, as it not only emphasizes the importance of sardines, but also provides those good morals that seem to have been lost on the current generation, such as the importance of keeping a promise and honoring your word. One of the things about the PS3 version of Disgaea 4 was that some of the history which led to exactly how the main characters became who they were was left out. Now we get to dive a little deeper into the back-story of the Tyrant (and our beloved protagonist) Valvatorez, his faithful servant Fenrich, and the mysterious Artina. 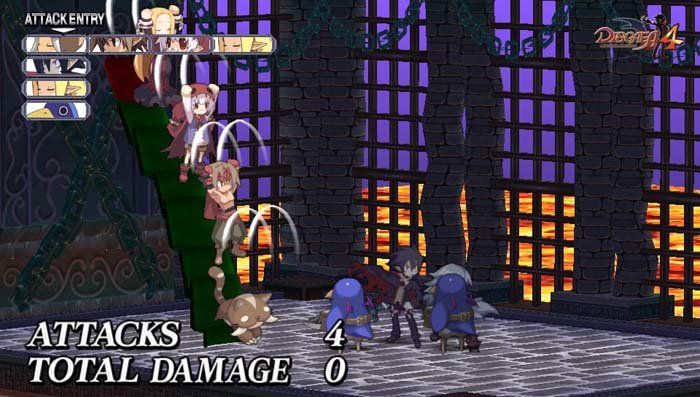 The real meat of the game comes from the SRPG elements, customization, and of course gameplay. Tried and true Disgaea elements return in D4 which should be no surprise to fans of the series. Such elements include reincarnating your characters (start over at level 1, but with increased base states and skills from their old class), the item world (which allows you to “dive” into randomly generated dungeons with multiple floors for each item to level them up and increase stats), and lifting/throwing your teammates to create tower attacks or cover other areas of the map. Attacking an enemy next to a teammate has a chance for a team attack and the animations for everything are gorgeous on the PS Vita. Two monster types can fuse together to make a super large monster, a human-type can “magi-change” with a monster type to turn them into a weapon with special skills. And lots, lots more. 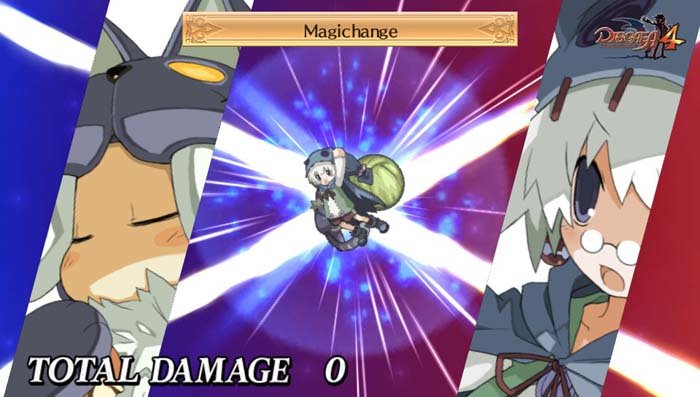 This PS Vita version of the game has all sorts of new goodies. For starters it includes all of the past DLC for the PS3 version of Disgaea 4, which is definitely a nice touch. This includes all of the songs from the original and DLC, which can be purchased with in-game money (not real money) if you get lucky enough to find the random character in the item world, otherwise you have to wait until you get further along in the main story and you can unlock it via a senate bill.  One of the things that I have always come to love about Disgaea is that you can literally play to your heart’s content. You can level up to 9999 if you want to, inflict hundreds of millions of damage points (in fact there is a trophy for inflicting 10 billion damage), and now we even get those Peta skills for extra damage. There are also some new character classes that you can create which include the medic, necromancer, kunoichi, celestial host, death saber, and prism ranger.

Pirates in the item world also return, but this time you can make your own to attack your friends and other random people on PSN. You can customize your pirate ship with various parts, make custom maps using the level editor, and customize the senate for passing bills. Just like in D2: A Brighter Darkness, you can also customize how much HL (in-game money), experience, mana , and the difficulty of enemies by using the in-game Cheat Shop.  Let’s face it, you can customize just about anything in the game. Also as some additional fan-service, D4: a Promise Revisited has a slew of returning characters from other NIS games including some personal favorite of mine Ash & Marona (Phantom Brave), Overlord Priere (La Pucelle Tactic), and Flonne (Disgaea). 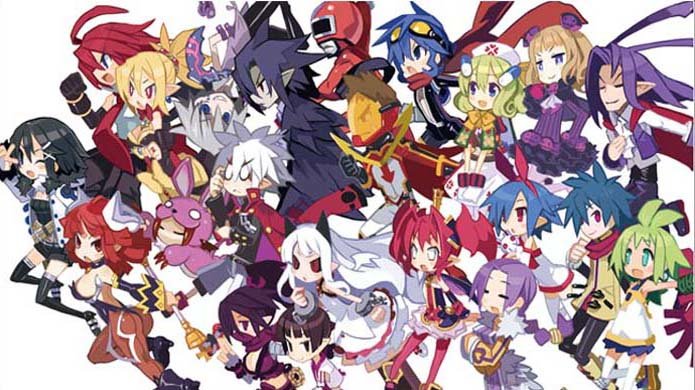 I feel like I wouldn’t be doing my job if I didn’t find something wrong with the game, albeit incredibly minor. While the graphics are incredibly crisp and the animations are smooth, the fact that the game is being played on the PS Vita’s 5” screen just doesn’t do the game justice in all aspects. The vast majority of the time, there is absolutely no problem with the screen, but every now and again you can’t quite rotate the screen just the way you want to see everything or adjust the camera angle just right when you zoom out. Also when your character gets poisoned, it’s incredibly difficult to see those little purple dots indicating that you have in fact been poisoned. Usually I won’t even notice it until the turn ends and my character takes a hefty amount of poison damage. But honestly, if these little nit-picky things are all that I can come up with, then NIS keep up the good work. In fact, because D4 is so damn addictive, I find myself playing for such long stretches of time, that my thumb and hands start to cramp up because of the PS Vita form factor, which of course speaks volumes about how good the game actually is.

While the original game was a PS3 exclusive and was received very well by many, it is no surprise that the masses just aren’t aware of the brevity of how great the Disgaea games are, simply because they don’t have the reach of say a Final Fantasy game (for shame!). Well hopefully this review will change that and gamers of all ages will pick up a copy of Disgaea 4, now on the PS Vita, because it is far and away the best SRPG on the PS Vita and definitely one of the best RPGs on a handheld. If you are looking for a game that you can just pick up whenever you want, can literally play for hundreds of hours without getting bored due to its incredibly addictive nature, look no further. Do yourself a favor and pickup Disgaea 4: A Promise Revisited, as you absolutely won’t be disappointed dood.

This review is based on a review copy of the PlayStation Vita Digital version of Disgaea 4: A Promise Revisited developed by Nippon Ichi Software and Published by NIS America.