You read it right, Pac-Man is back with another video game proving to everyone that he is still popular enough to get another game. This game is a sequel to the original Pac-Man and the Ghostly Adventures which is not the 2D Pac-Man you may be used to. Instead, this is based off the TV show rather than the classic iterations of Pac-Man of video game lore. Since the cartoon currently airs on the Disney channel, the audience is rather limited for this game. However, if you like the show and watch it regularly, this is a great way to get more out of that license. 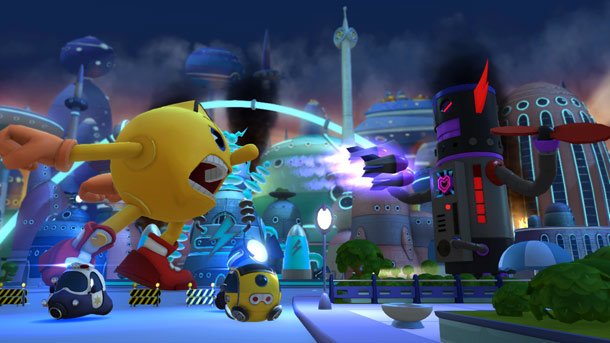 The premise of the show is actually rather dark when you look at it from a distance, but as far as the game goes, the plot is rather shallow. Simply put, you play as Pac-Man and it is up to you and your two friends Spiral and Cylindria to battle against Lord Betrayus and his army of specters to prevent him from taking over Pac-Land. There are lots of nods to the show, but unless you are an avid fan, you’ll probably miss most of it.

At the game’s core, Pac-Man and the Ghostly Adventures 2 is very similar to the first game, which is a very basic 3D platformer much like Gex or Crash Bandicoot. You are presented with a level and you can make a rush for the end or explore the level and find all the hidden items. At the end of the stage, you’ll be graded and move on to the next. There are some power-ups distributed around the level which add some variety to the platforming the game is built on. Overall, is it very simple and certainly easy enough for kids to get into. There are also lots of throwbacks to video game fans, so though you may not know all the characters, you will recognize a lot of the set pieces. 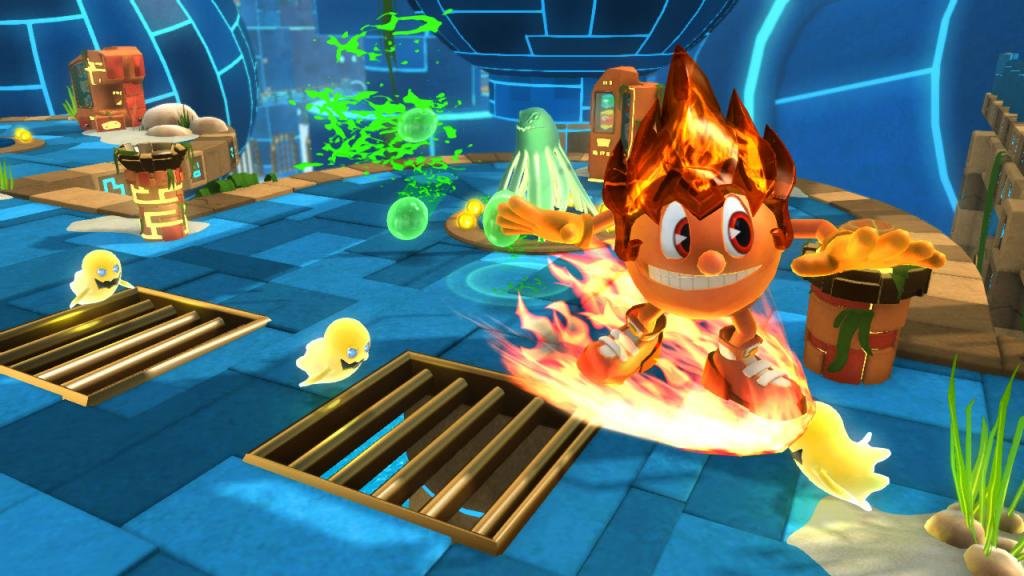 From a production stand point, Pac-Man and the Ghostly Adventures is a very middle of the road game. The game looks decent enough on the consoles and it utilizes lots of bright, vibrant colors to make up for the short falls. The stages are rather formulaic and reminiscent of games past. Ghostly Adventures 2 is not going to blow you out of the water with cutting-edge design or presentation. In essence, the game is very safe and just gives you a Pac-Man game, which is fine for fans and generally a solid game, but does little else to attract new fans to the franchise.

The only real problem we have with the game was the voice acting. Pac-Man and his friends have annoying voices that you have to deal with the whole time. This is especially jarring for old school Pac-Man fans who remember the character with no voice at all. Granted this is targeted to children so they have more child-like voices, but I’m pretty sure they could have done a better job at relating to their audience than what we are left with.

Pac-Man and the Ghostly Adventures 2 is a highly-targeted, high production value licensed game. While this isn’t going to appeal to most gamers out there, it does a good job at being simple, approachable and true to the source material. From a technical standpoint the game plays very well. The controls are responsive, the camera gets out of your way and the button layout is intuitive. It’s everything you’d expect from a decent platformer. Whether or not you should pick up the game really depends on how big of a Pac-Man fan you are and how well do you know the TV show.

Overall, we enjoyed our time with Pac-Man and the Ghostly Adventures 2 for what it is. As we mentioned, this isn’t for everyone, but if you have kids or you are buying this for someone with some familiarity with the license, this is a good game to buy. It doesn’t resort to cheap production values that many cash-ins resort to which makes this bearable to play. If a regular gamer picks this up, you’ll get some of the references and sound effects and maybe that is enough for you. As for our recommendation for this title, we say if you’ve heard of the game, you should pick it up. If you’ve never heard of it, you are probably not part of the demographic they were making this game for and should look somewhere else for your Pac-Man fix.

This review is based on a review copy of the PlayStation 3 version of Pac-Man and the Ghostly Adventures 2 published by Namco Bandai.

Did you like this? Share it:
The Pac is Back | Pac-Man and the Ghostly Adventures 2 Review
Overall Score6.5
Positives
Negatives
6.5Overall Score
Reader Rating: (0 Votes)
0.0