I’ve always enjoyed the idea of distilling a game that lends itself to inherently complicated mechanics down to its essence.  Divekick was a fascinating experiment by Iron Galaxy that stripped away the execution, specials, and meta-strategy of fighting games so that what remained was a minimalist experience that nonetheless felt competitive and thrilling, and lent itself to a surprising amount of depth and control over the flow of a match.  The elimination of barriers to entry, complicated combos, and the minutiae necessary to master a Street Fighter or a Mortal Kombat helped create one of the most interesting and minimalist competitive experiences in the past few years.  In fact, there’s been a resurgence of this design ethos of simplicity recently, particularly in local competitive titles, with games like Samurai Gunn, Nidhogg, and Towerfall all sharing similar ideologies of stripped-back, level-playing field competitive mechanics that are dead-simple to understand but lend themselves to potential high levels of difficulty and mastery.  The original OlliOlli followed in the footsteps of these titles when it was released to critical acclaim and cult popularity last year, and OlliOlli 2 helped build upon these concepts in satisfying and well-realized ways during its original release on the PS Vita and PS4 earlier this year.  The game and everything to like within it has survived the port to the PC with smooth technical performance, and its low asking price makes it an easy recommendation for both returning players who wish to enjoy the game in higher fidelity and newcomers who haven’t yet experienced what the series has to offer.  With smart enhancements to the series’ trick system, local multiplayer, and smart leaderboard integration, the lower barrier to entry on the PC platform means there’s never been a better time to enjoy some stripped (and laid) back skateboarding.

There’s been a lot of different interpretation of skating to varying degrees of success in the history of gaming.  Tony Hawk still stands as the most well-known name despite its floundering relevance in recent years – and rightfully so, given the pedigree of some of the series’ best titles like Pro Skater 2.  Its arcadey action and lack of approximation of the actual realities of skateboarding helped inform myriad titles in the Playstation and PS2 era, spawning clones like Grind Session and Matt Hoffman’s Pro BMX.  On the more realistic side of the spectrum, the Skate series stood as a challenging but immensely satisfying experience, blending a goofy sense of humor, a childlike glee for wiping out, and a complex stick-based trick system into a mostly cohesive and intuitive package.  OlliOlli stands as a unique interpretation of the sport which is informed and influenced by these games, and trades any sense of realism and the third plane of movement for a spartan, 2D realization of skateboarding in a fantastical setting.  The controls seem dead simple, almost too much so – tap A to push the board forward, pull down and let go on the right stick to jump, and tap A again on the descent to stick the landing.  Little by little, though, the game ekes out caveats to these simple rules that exponentially increase the difficulty of the actions you need to pull off. 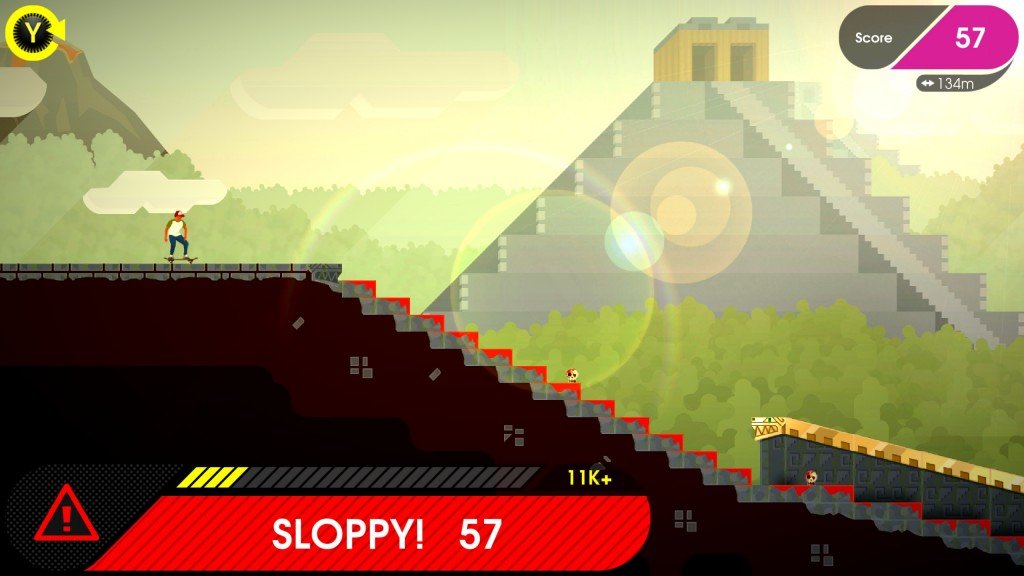 If you’re anything like me, the game will remind you you’re sloppy quite often.

Now, OlliOlli reveals, you can manipulate the stick motion on jumps to pull off different tricks.  Also, make sure to hold the stick down to grind rails, lest you wipe out.  Incidentally, the timing on the A button press to stick the landing is incredibly tight – and you missed it, which means you get no points for that long series of tricks you just strung together, the game chides.  These basic folds in a simple canvas provide a huge difficulty bump in the ask of communication, which is further (and brilliantly) complicated by OlliOlli2’s most significant update to the original formula: manuals.  Following the Tony Hawk model, OlliOlli introduced manuals in its second iteration as a way to string together ludicrously long series of tricks for massive scores – and all it takes is adding a simple push left on the left stick along with the A button press as you land.

All these simple requests boil together to become much more than the sum of their parts in a real “pat your head and rub your stomach at the same time” sort of way.  It’s difficult to explain to someone watching the game who thinks you’re an idiot for your sloppy landing, but having your brain multitask between reading the track and obstacles, hitting the tricks you need for score, and the dead-simple but brutally precise timing on landings, manuals, and grinds creates the kind of stress that impairs prefrontal cortex function and sends you back to your reptile-brain instincts of button-mashing and panic.  The solution?  The same as training your brain to operate in any short term stress-inducing situation: making actions habits.

OlliOlli2 is a game that lives by this idea of replaying levels to make executing macros instinctual.  There’s not a ton of levels here – 25 in the base career mode, to be exact – but to look at each level as an entity with a singular critical path and “right way” to play would be entirely disingenuous.  In addition to simply making it to the finish line, which can be an ordeal in and of itself, each level boasts five bonus objectives that range from nailing a certain trick a number of times to picking up all of the static placed objects in a level that requires following a specific path.  The former is one of the few sources of real frustration in the game – whereas most failure can be entirely blamed on user error, OlliOlli2 has inherited the inherent inaccuracy of relying on the right stick for precise trick execution.  Too often, trying to hit a kickflip ends up in a Backside 180 or the likes, and performing three of them in a level to hit a bonus objective becomes an exercise in trying to translate a movement better suited for an arcade stick to an analog stick rather than a true test of skill.  That one extra distraction and stressor can be enough to take one’s attention off of the level at hand, leading to another wipeout. 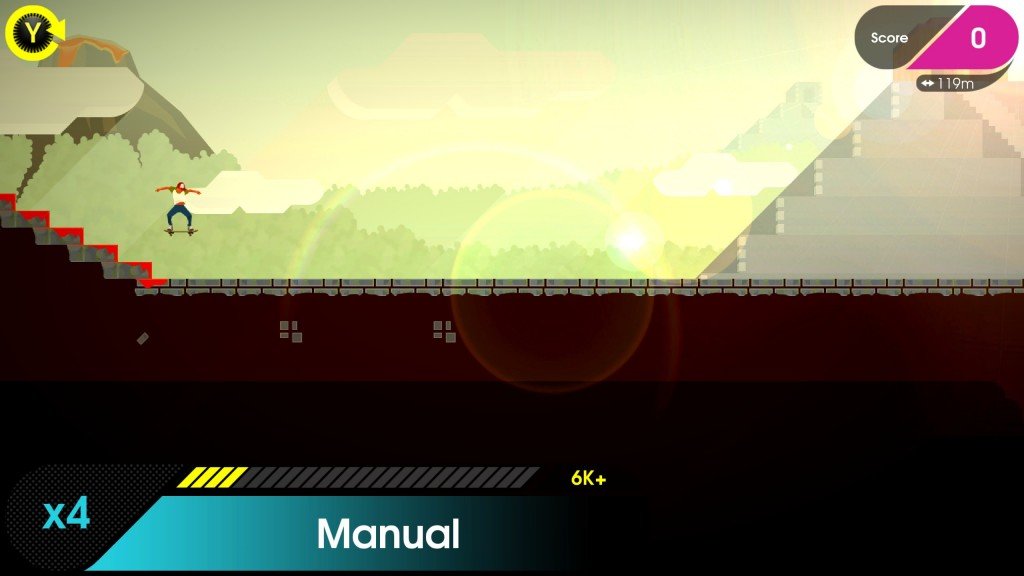 The visuals and soundtrack meld into a dreamy, pleasing aesthetic.

The bonus objectives dedicated towards exploring alternate pathways experience better fortune and are enhanced by OlliOlli2’s addition of alternate paths through a level.  Frequently, maintaining maximum speed and efficiency will give you the height on jumps to reach a higher level that may hold better opportunities for tricks, less traps to crash on, or collectibles needed to complete a bonus objective.  These alternate pathways stand as a smart addition to the formula, and help provide additional replayability to a stage.

If you complete all of these bonus objectives, you’re given access to the “Pro” version of the level.  These brutal remixes take the basic layout of the stage and add in additional obstacles, subverting your knowledge of the level you’ve gained through so many replays by changing key elements of timing.  It’s a smart way to fight complacency and familiarity, and another element that helps add to the inaccuracy of the citation of “25 levels” as a bullet point.

Outside of the basic solo career, there’s a couple of other modes to play around in.  Various “spots” are unlocked through the basic, make-it-to-the-end completion of each career level and are a single-combo score challenge.  The leaderboard integration on these 50 spots and the “daily grind,” a Spelunky-esque single-run spot that is newly seeded every 24 hours, provide the potential for further, higher-level competitive play.  There is additionally a 2-4 player local cooperative mode that supports several different game types, such as “first to X score” and a spot-like single-combo-run competition.  These inclusions are a smart addition to the base experience and help provide longer-lasting value to the title.

There’s a lot of reason to want to come back to the game for this extra playtime.  The sharp visual aesthetic, which varies between the game’s five Hollywood-set inspired “worlds,” is complimented by a very well-curated ambient electronic/chillwave soundtrack with cuts that wouldn’t sound too out of place on an ODESZA or Flume joint.  Whereas similarly difficult games often populate their soundtracks with a driving techno/trance score, the laid-back beats here take on an anthropomorphic quality, patting you on the back after a sloppy landing and reassuring you before pulling focus on their fisheye lens for the next take in your hot skate video. 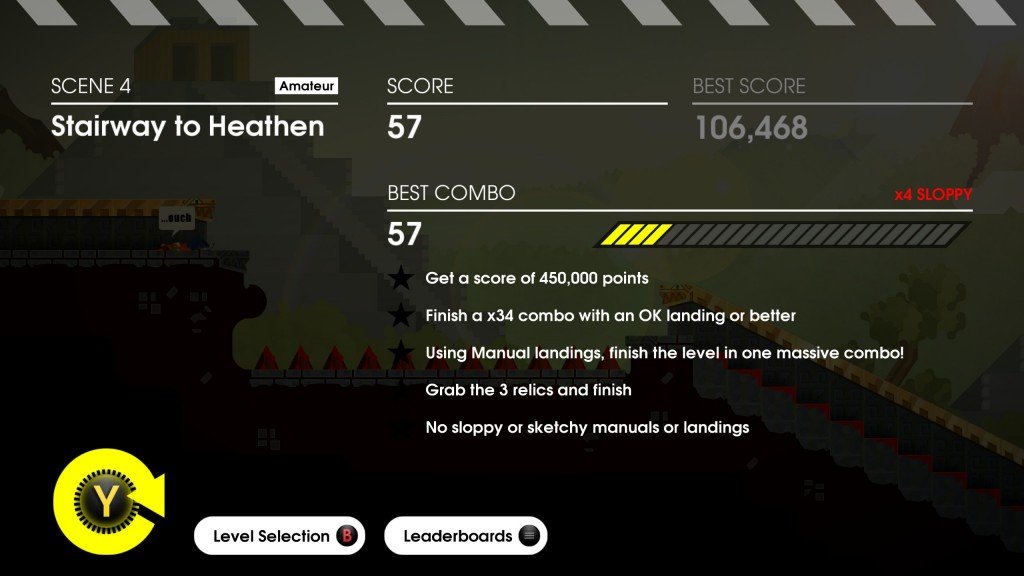 The bonus objectives are where the real depth of the game is revealed.

The visual and aural aesthetics all benefit from the game’s translation to a more powerful and open platform than the Vita or PS4.  Enjoying the crisp 2D art on a 1440p screen and nodding my head to the beats emanating from a dedicated subwoofer is undoubtedly a superior way to experience the game than its debut platform.  While losing its portability from the Vita version, the game gains fidelity and can be anecdotally extrapolated to its ultimate realization on a 4K flatscreen and 7.1 soundsystem to great effect.  In fact, the game lends itself to a living-room experience moreso than a keyboard and mouse-based box; while the keyboard controls could certainly be classified as functional, the game was clearly designed with an analog stick in mind for tricks and a Dualshock 4 or XONE controller remain the superior options for play, and the PS4 version is entirely competent in this light.  It should be noted the game ran at a smooth framerate during the entirety of the review process, and I encountered no technical issues during play.

OlliOlli was a unique and fresh take on the stale skateboarding genre, trading complex trick execution and 3D space for a sharp, focused take on the distilled essence of the sport.  OlliOlli2 doesn’t reinvent this formula, but manages to iterate on it in several key ways that all land the mark as significant and smart additions that enrich the gameplay experience and increase the value of the game.  While OlliOlli2 can feel slight, the low price tag and level of replayability offered by the new multiplayer and the sustained leaderboard integration for competitive asynchronous online play help add value to an already rich and polished title.  While none of these tweaks or additions stand as significant enough to change the mind of anyone who didn’t care for the original title, OlliOlli2 on PC stands out as the current ultimate version of the series to experience thanks to the versatility and increased fidelity of the PC platform, and is an easy recommendation to anyone interested in a rewarding and challenging minimalist representation of skateboarding.

This review is based off a review copy of the PC version of OlliOlli2: Welcome to Olliwood developed by Roll7 and published by Devolver Digital.

Did you like this? Share it:
Simple to Grasp, Difficult to Master | OlliOlli2: Welcome to Olliwood Review
OlliOlli2 stands as the ultimate realization of the OlliOlli franchise to date, and the increased fidelity of the PC version makes it an easy recommendation to veterans and newcomers alike.
Positives
Negatives
8Overall Score
Reader Rating: (0 Votes)
0.0