I remember playing the Tony Hawk series as a kid, pulling off sweet looking tricks and stringing together combos for absurd amounts of points. The early games were fun and no series since has scratched my video game skateboarding itch. That is, until OlliOlli came along.

Originally released in January 2014 by Roll7 for Playstation Vita, OlliOlli is a near perfect blend of control, style, and design. The colorful 2D graphics are simple but eye-catching. Five distinct areas make up the levels of the game, from the snowy, Communism-filled Base to the flashing lights of Neon City. The backgrounds and art for each area is distinct, ensuring that none of them is a boring retread. Each level is a fluid mix of flat land and rails to grind on, allowing for continuous combos that have the potential to last an entire run. Each stage is neither too long nor too short, giving you the perfect amount of time to showcase your skateboarding skills. 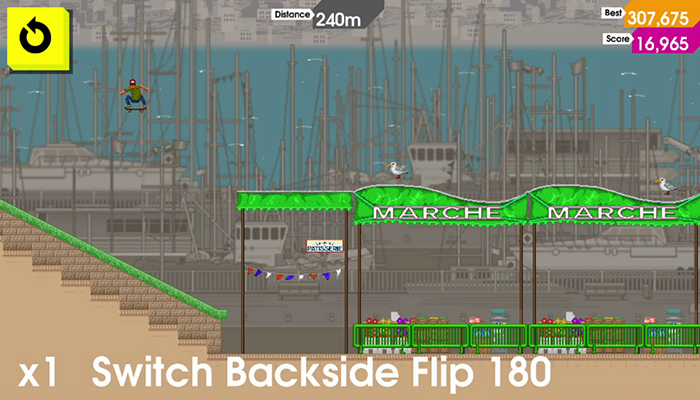 OlliOlli features an extensive trick list, allowing for unique combos each and every play through. The addictive crash-and-die gameplay keeps you searching for the best way to navigate the stairs, rails, and other obstacles in each level and rack up the most points, but never crosses the line of frustrating. Different motions on the left control stick combined with different buttons perform tricks. There are moments when this control method feels a little inexact, but that’s being nitpicky. Completing the starred challenges of each stage unlocks Pro levels, increasing the replayability of OlliOlli.

To top it off, OlliOlli features an amazing soundtrack that you can cycle through at will. These jazzy EDM tunes will have you bopping your head as you pull off crazy tricks throughout the game. In fact, I wish the track list were longer. 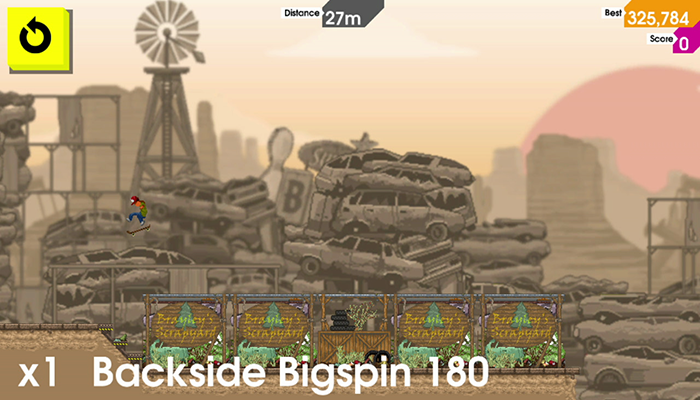 OlliOlli, through its simple art style and fast, twitch gameplay, reinvigorates a stale genre that needed a good kickflip to garner any interest for me. When you combine those two aspects with the addictive nature of adding just one more trick to your combos, you have something special that will keep the controller in your hand for hours.

There is one little gripe I have with this game, though. I wish OlliOlli had something to offer in the way of multiplayer, either local or online. It does offer the Daily Grind challenge, which gives you one run to post your best score against players around the world. Multiplayer has always been one of my favorite aspects of playing a skateboarding game. A simple HORSE-like mode would have made a nice addition.

Despite the lack of a true multiplayer option, OlliOlli is nearly perfect. It stands as the best offering the genre has had in a while. The game grinds in its own unique niche and has definitely made me interested in skateboarding titles again.

This review is based on a review code of the Xbox One version of OlliOlli developed by Roll7.