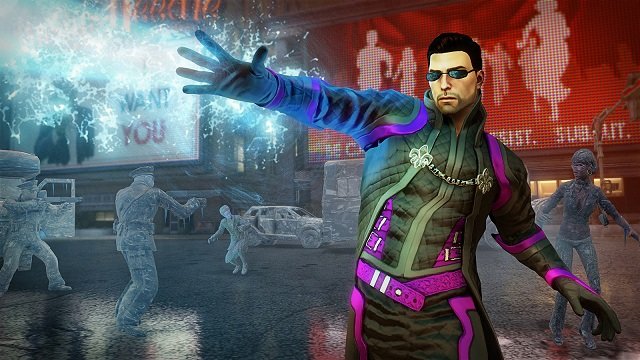 So we just got back from PAX East and we were able to see all kinds of cool things.  A personal highlight for me is that we got the rare opportunity to see some Saints Row 4 footage and to talk to Steve Jaros the creative director of the game.  I’m just going to be frank here and say… the game looks amazing!

So when the footage starts we get to see The Boss of the Saints, who is now the President of the United States of America, in a whacked out Stillwater sporting an Apollo Creedesk outfit straight out of Rocky IV. He immediately runs to someone, kicks them in the gut, then delivers a perfect Stone Cold stunner.  Basically the video wastes no time showing us it’s the same old Saints Row we know and love, but with some new and improved stuff this time around.  As we’ve seen in every Saints Row game thus far, they’ve stepped it up to a whole new level.

The first thing we hear about is some of the new weapons, and they don’t disappoint.   The Inflato Ray blows people up until they literally, blow up. When they are first hit they look like someone turned on Big Head Mode in NBA Jam or 007 Goldeneye, until they ultimately explode.  The dubstep gun renders people useless with the power of dubstep, causing the unlucky victims to dance themselves to death.  Then there is the new weapon skins for the guns.  When you get tired of looking at that same old rocket launcher, you can upgrade it, giving it an entirely new look.  Now, if you want, you can fire a rocket out of a guitar case, ala Desperado. 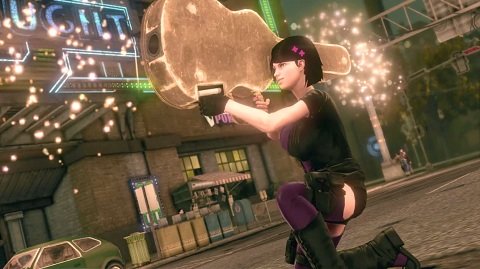 The biggest surprise they had in store for us is that you have super powers now.  Honestly, I guess that was the only logical way they could take it up to the next level after Saints Row 3.  With these super powers:

I mean the super powers just look absolutely ridiculous, but also like a ton of fun.  Oh, and you may ask yourself what kind of enemies are going to stop a fully superhuman you?  Aliens of course!

The game does look amazing and the franchise continues to step up notches I’d never even thought it needed.  But there’s a few things I’m sad about too.  With the absurdity of these superpowers, it looks like the game is taking a step back from one of the things it did so well… the cars.  When you can super run through the world, or jump and fly, there’s not much more reason to build a garage full of your favorite customized vehicles.   Also the story’s going to follow the Saints Row 3 model and have one main story to follow, with side activities all around.  While not necessarily a bad thing, I had a lot of fun playing the first two Saints Row games where I could jump around between the stories fighting opposing gangs as I saw fit.

I really do think this game is going to be amazing and I have high hopes for the future of the Saints Row franchise.  It seems like they’re taking it in a logical step.  I just hope they don’t lose sight of the things that made the series so great in the first place.  I guess we’ll have to see when the game comes up April 20th!