Specifically developed for iOS devices, Zombie Burst is a new mobile game that combines two of America’s favorite past times: killing zombies and popping zits. With a simple yet addictive style of gameplay, this game has plenty to offer any mobile 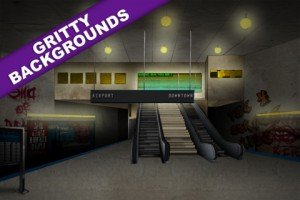 gamer. Zombie Burst is now available for download via the iTunes store for the low price of ninety-nine cents.

In 2010, the world was given a gift when Professor Grace Charles  developed and created a new water filtration method using minerals and nuclear radiation. This new method became the most efficient way to filter water and even increased a person’s ability to resist illness. The professor was praised as a hero until his untimely death a year later. Just two years after the water filtration system was placed throughout the world, suddenly 89% of the world’s population turned into zombies. The game follows one person trying to rid their hometown of Chicago of zombies.

The controls of the game are easy to grasp for even the newest of mobile gamers. In fact, killing the zombies is a simple task. If you have ever popped a zit, you can kill a zombie in this game. Simply squish or pinch the heads of the zombies with two fingers and their brains burst onto your screen. The brains make it difficult to see the rest of the zombies that are heading your way, but thankfully you are able to wipe the screen clean and continue killing those zombies.

Zombie Burst provides gamers with plenty of zombie-popping pleasure. The game is simple in concept but offers lots of fun and ample challenge. Zombies quickly pop up and down on the screen, meaning you must be focused and ready to pounce. The zombies sound scary, and what can be assumed as realistic, since there has never been a real zombie. With ten levels to enjoy, players can get the most out of their ninety-nine cents. Finally, being able to wipe the screen of 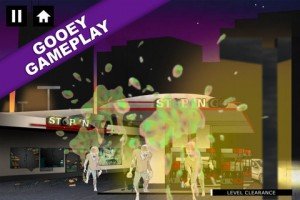 However, Zombie Burst has a few minor issues that could have been tweaked to greatly improve the gameplay. The first and most glaring issue is that there is no iPad version – the controls are optimized for an iOS device that can fit in one hand. However, the development team claims to understand that this is an issue, and to appease the larger-screen gamers, their website points out that an iPad version of the game is coming soon. Once this issue is addressed, this game will be hard to put down, and could easily become one of the better games on the platform. Additionally, the game’s story is interesting and has clearly taken some thought, but still remains largely underdeveloped. It would be great if the team at CatFoster Media could have presented this story in a more interesting and engaging way, like a mini-movie production or animated short. The game has some cut scenes with images, but a more extensive replacement with these animations could have added depth.

Overall, the game’s positives outweigh its negatives. CatFoster Media certainly provides gamers with another solid mobile zombie game. It is worthy of the space on your device and we cannot wait to try the iPad version when it is released. We give Zombie Burst 7 out of 10 popped heads.