The A.Typical RPG is the inaugural title from Pyrodactyl Games. It is an indie game that certainly lives up to its name in terms of content. The game is a unique branching RPG take on the intricacies of university life and the challenges that come with it. While the RPG label is a little bit of a stretch, it does kind of work because the game plays like a visual novel with mini-game adventures. There are a lot of really cool ideas featured in the game, but there’s a lot dragging it down too, making it a tough release to recommend.

The basic style of the game is immediately familiar to any fans of the Scott Pilgrim franchise. The notes are different but 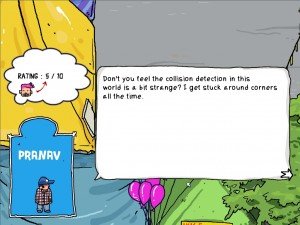 the beat is the same. You are a college-aged slacker, enrolled in a university in some nondescript town. As the pink-haired player character tells you in one of the many, many fourth-wall-breaking moments, he wants to break out of his slacker ways and become cool, awesome, and successful. This is accomplished by passing classes, playing soccer, fighting bullies, and wooing The Girl, his neon-haired soul mate. Of course, all of these actions translate into a bevy of mini-games. The graphics are pleasantly cartoonish and have a neat and consistent doodling style that suits the subject matter. There are lots of great little elements and visual gags as well. We liked that the developers replaced the stereotypical quest journal with a Twitter-esque feed that your character constantly updates with new goals and outcomes.

The dialogue is a little more hit-and-miss, which isn’t a problem in most games but becomes less acceptable in a game where the vast majority of your playtime is spent reading through dialogue windows. It really needs a bit of polish and editing – some conversations could use trimming down, sprucing up, and clarification. Some jokes land, some get a little lost in their own wackiness, and some just don’t make sense. The game is a little too reliant on fourth-wall humor and repeatedly engages in one of our pet peeves: pointing out flaws in the game within the dialogue. This is normally okay once or twice within a game, but we counted at least eight instances of characters complaining about “engine limitations” to waive away problems within the plot and game.

Like many modern RPGs, The A.Typical RPG features branching dialogue trees that impact how the characters react to the main character (labeled as your “rating”, possibly another Scott Pilgrim nod). But sometimes the game launches into a 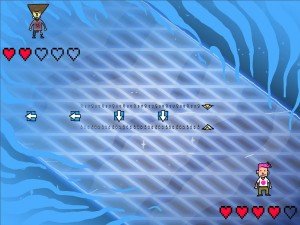 very neat timed dialogue mini-game where you see the question being asked in the middle, the character’s known personality traits in a thought balloon up top, and four switches to determine your reaction: things such as agree/disagree, interested/bored, calm/angry, and sincere/sarcastic. As far as we can tell, the game has a unique dialogue response from the player character for nearly every combination in every conversation, which is an excellent touch.

The other really deep mini-game/battle system is the soccer matches, which are a turn-based tactical affair. It’s a very cool idea that unfortunately gets wrapped up in repetition and exploitable artificial intelligence, but the foundation is solid. The main character and the other players take turns moving around on the field, tackling to retrieve the ball, and taking shots at the net. As a massive Blood Bowl fan, we love the idea of a sport-based tactical RPG, and despite its simplicity, The A.Typical RPG‘s take on that tiny subgenre is not too bad.

Unfortunately, there are a few serious problems with the game engine. First of all, enemies take their turns blindingly fast, and it becomes basically impossible to figure out what your opponents did. Just a “whoosh” and the whole field looks different. Adding in animations, no matter how simple, would have drastically helped this issue. Secondly, there are a few serious bugs. The worst one we encountered was the entire enemy team disappearing off of the field and just hanging around on the sidelines, but that was a one-time affair. However, the ball will 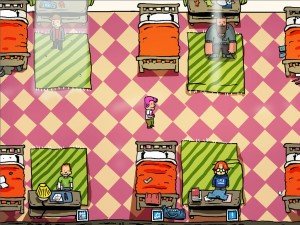 The other two games of note are the class exams and the combat. Class exams are stealth-based moments that simply require good timing, while combat seems to want to replicate the massive evil ex battles of Scott Pilgrim, with flashing lights and amusingly named video game attacks. However, it is entirely quicktime-event based, and there are basically no animations to make it seem engaging. In fact, in yet another bug, the enemy often disappears during attacks. We don’t inherently have an issue with quicktime-based battles, but they have to at least look and sound interesting, otherwise they just become a slog with little variation.

That only leaves the worst thing to talk about: the very serious and very critical bugs. First of all, we had huge issues with the save system. To save, you need to type in any phrase, and to load you need to type the same phrase exactly, which seems like a bizarre method of save management. Worse yet, it’s functionally broken. We loaded previous files twice only to find that all of the relationship ratings were reset, which seriously wrecked progression in the game. Many other files didn’t save properly at all. One file crashed at every attempt to reload. Another shunted us back to the start of the game.

The biggest problem is the issue of gameplay loops. We’re not entirely sure if the gameplay loops are horrible bugs or simply clever Groundhog Day meta-commentary, but we can assure you, they’re not fun. One of the first parts of the game 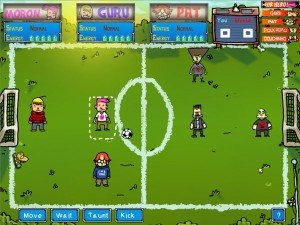 requires you to repeat the same three days over and over while you get a certain character’s rating up to ten. The game does not progress until it reaches ten, and you can only increase the level a maximum of three points every time you play the particular segment. The same three days’ worth of identical gameplay repeats over and over until you accomplish this. Commentary or not, that’s not fun game design. You could have the best dialogue and mini-games in the world, but they sure don’t get any better after four times through. It just transforms the already so-so dialogue into a grating wall to click through furiously.

But in the end, after many bugs, three crashes to our desktop, two crashes on exit, three save file wipes, two forced restarts and a whole lot of confusion, we still only spent a little over two hours on the game. Yes, the game is budget-priced, but we certainly wouldn’t say it was enjoyable for two hours. That being said, there are some excellent ideas buried in The A.Typical RPG, but those darn engine limitations keep it from working cohesively. We can’t even remotely recommend this release to anyone but the most apologetic of indie fans. But at the same time, this developer really shows promise. In fact, their next release, Will Fight For Food, looks excellent. The game just needs a better central basis to build out from, because right now the good ideas just get lost among the serious problems.

Final Verdict: The game is barely functional and often frustrating. The developer had a lot of good ideas, but these are outshined by the messy core of the game. Hold off for either the ECWLB edition or the next release from this developer.

This review is based on a review copy of the PC version of A.Typical.RPG provided by Pyrodactyl Games