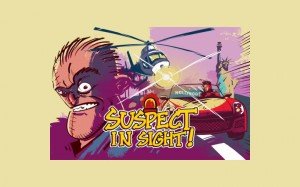 Suspect in Sight, by Jujubee S. A., is your typical iOS one-trick pony, in that the whole game revolves around one single mechanic.  It just so happens that this particular pony has some real kick to it.  The game takes this one trick and manages

to make an entire experience around it that is satisfying and makes you want to come back to it again and again.

The premise of the game could not be simpler.  You are “Rob, the ultimate badass police officer”, a police helicopter pilot who evidently goes from city to city helping the local authorities take out their criminal garbage.  It’s as good of a premise as any for this type of game, and it adds the required flavor to give a little method to the madness that is Suspect in Sight.

The graphics of the game are a mix of a very solid 3D engine for the gameplay and a strange, cartoonish look for the characters in the game.  But since most of your time will be spent playing in the 3D game engine, the odd characters aren’t too bothersome.  On the iPhone 3GS, everything during gameplay is very solid and smooth.  It is supposed to be even prettier on a 4th generation device, but this reviewer does not have one, so that cannot be confirmed in this review.

The audio is good enough for a game of this nature.  The music is of decent quality, and the sound effects are all fitting.  One thing that is done really well in this game audio-wise is that while you are going around helping to bust bad guys with your police copter, you can hear the police radio chatter in the background.  That is a really nice touch for the game and lends to the 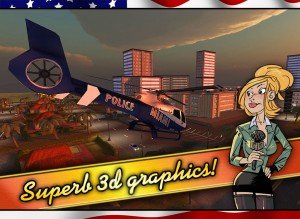 authenticity of the experience.

As stated in the beginning of this review, the gameplay revolves around one single mechanic, which is typical for an iOS game.  The mechanic that this game is built on is flying around in your police copter (by tilting your device) and chasing suspects who are always in the same red cars.  You might not think that is very realistic, and it surely is not, but it makes sense in a video game, especially one with an arcade feel to it, such as this one.  The way that you capture them is to get close enough that your spotlight “sticks” to them, and then keep them like that until the cops on the ground come around and ram into the suspect to stop them.

Stopping the suspects is very visceral and satisfying, and you really feel like you helped chase them down.  When you finish taking out one bad guy, you look at your radar on the bottom left of the screen, find the position of the closest suspect, and fly off to intercept them. You can mostly travel to a chosen target in a straight line (since you are in the sky and all), but there are buildings interspersed throughout the city that you have to navigate around, adding to the challenge in this game in a good way.  The other main element that adds challenge is that each time you play the game, there is a time limit, and you have to try to stop as many suspects as you can in that limit.  There are also crystals to collect (by tapping on them) every 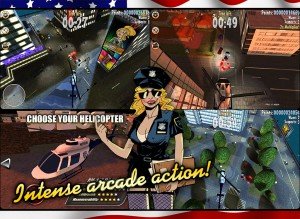 time you stop a suspect and questions marks to hit that give you various collectibles.

There really isn’t too much in the way of different modes in this game.  You gain experience points as you play that gain you levels, and certain things are unlocked as you move up in the ranks.   Then main unlockables are a new city to fly in (you start in Miami, and unlock New York at level 5) and new copters.  There is also a “Wall of Fame” that allows you to see all of the achievements you have unlocked.

Overall, this is a great arcade-style game with lovely 3D graphics and a single mechanic that will keep you coming back to play.  The gameplay itself is also very rewarding, in that it makes you really want to catch that next suspect. Luckily, there is enough skill involved that you can keep playing to get better at it.  Suspect in Sight is a great edition to anyone’s iOS game collection, and comes highly recommended.

Suspect in Sight on iTunes

This review is based on a review copy of the iPhone version of Suspect in Sight provided by Jujubee S. A.