The land of Albatropolis is a dark and brooding place, a dystopian society run by a ruthless faction of penguins led by a dictator named Putzki and his main thug Bruno. From above the urban sprawl of despair, in drops our hero, Hardboiled Chicken, a Rambo-esque, gun-wielding super-chicken. He is the salvation for this place and the harbinger of doom for Putzki and his thugs. It won’t be an easy journey for Hardboiled Chicken, but he has the tools and experience necessary to complete his objective.

Rocketbirds: Hardboiled Chicken is the latest instalment in the Rocketbirds series of games, the first of which was a PC release which came out two years ago. Both games share many of the same mechanics, but with a console release comes a new 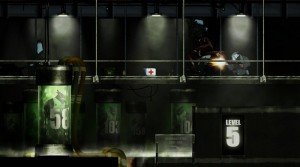 story and new features that take advantage of the new platform. For those unfamiliar with the series, this game makes its debut on the Playstation Network as part of the “Only on PSN” campaign. Rocketbirds: Hardboiled Chicken is a 2D Action Puzzle game similar to the Contra franchise in terms of story and gameplay. Your objective is to run, jump and shoot your way to the end of the level. There are some light puzzle mechanics in the form of fetch-quests and finding secret areas to acquire the items you need, but the game is fairly linear, as the 2D scrolling suggests. The mechanic that sets this game apart from other puzzle platformers are the jet-pack levels. Every once in a while, Hardboiled Chicken will throw on a jet pack and zip around a flight arena, and these sections give the player a welcome break from the otherwise repetitive and homogeneous gameplay.

Rocketbirds is a tantalizing mix of new and fresh gameplay elements set alongside elements that we’ve seen time and time again. On one hand, you have a beautiful art style and animation that really accentuates the characters. The levels are moody and bring the draconian feel of Albatropolis to life, and even the smaller details on the character models and backgrounds look great. But on the other hand, the characters themselves are very stiff and are 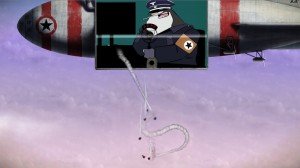 basically bullet-sponges when things get intense, and the cover system doesn’t feel all that fluid. Hardboiled Chicken doesn’t jump all that well, so trying to get over or under bullets is out of the question, and what makes things even more difficult is the fact that you can’t see the bullets as they are being fired. This would normally give players an indication as to where the firing is coming from, but instead you just see muzzle flashes and you get sprayed with bullets. Every bullet hits its mark as long as you have the right line of sight, so the game lacks some of the finesse of aiming or the satisfaction of a well-placed head-shot.

The jet-pack sections are no exception to the great-but-flawed model experienced in the rest of the game. The jet-pack is a fun way to break up the gameplay, so it’s effective in that respect, but the problem comes when trying to fly and aim at the same time. There is no targeting system and you aren’t given a way to see where you are shooting. The only way to ensure that you hit your target is line-of-sight shooting. This would be fine except that the enemies don’t stay in one spot, so you are trying aim your weapons at the enemy while trying to fly and fire at the same time, all while never being sure if you are 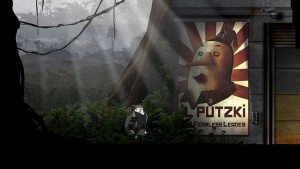 hitting your target or not. Adding a cross-hairs or some sort of damage indicator would have made these sections more enjoyable.

Even with its weaknesses, Hardboiled Chicken is an excellent game. We believe that the good elements come through and move the game beyond what holds it back. The game is worth it for the atmosphere alone, and when you mix that with a funny, subtle sense of humor and a beautiful visual effect, you have yourself a great game. We would definitely recommend this game to anyone in the mood for a solid 2D action game. The puzzle elements are very light, so even if you hate puzzles, they won’t bother you too much. This game is a great addition to the “Only on PSN” campaign, and one we hope Playstation 3 owners will consider adding to their library.

This review is based on a review copy of the Playstation 3 version of Rocketbirds: Hard Boiled Chicken provided by Rat Loop Games.