Robot Unicorn Attack, produced by Adult Swim Games, takes you to an enchanted world full of dolphins, unicorns, mini stars, and giant, deadly stars. This game is currently available on iOS, Android platforms, and as a flash game for PC and Mac. This review will focus on the iOS version of Robot Unicorn Attack.

If you have never heard of this game before, you might say, “There is no way a game with a unicorn that perishes when it collides with a giant star can be good”. Well, you would be wrong; dead wrong. The goal of the game is to navigate your 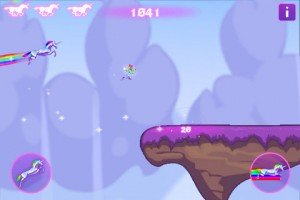 unicorn through a moving, colorful world while collecting mini stars and “dashing” through giant stars. You are given three wishes, or lives, and when you run through all of them, you lose. To live your lives to the max, make sure your unicorn has the stamina to jump from one cliff to the other. If you don’t have the required stamina, you will find yourself free-falling to your untimely death. Your only hope is to land on solid ground in the form of a well-placed lower cliff. 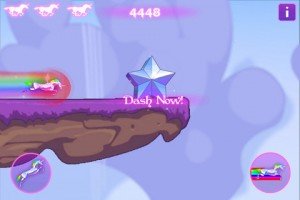 the mini stars and “dash” through them. Dashing is accomplished by pressing the dash button in the lower right corner of the screen. Dashing will make your unicorn temporarily move quickly, leaving a rainbow in its wake. While you are dashing, you cannot change direction for the duration of the dash. When you encounter these giant stars, you can either avoid them and continue your flight path, or destroy them and earn more bonus points. Giant stars are worth 100 points.

Robot Unicorn Attack has a great soundtrack and sound effects, which helps to make this game a sure hit. The title song of the game, “Always” by Erasure, is a fantastic track. The song just seems to complement the visuals of the game, and you can’t help but get a smile on your face when you hear this song in context. The 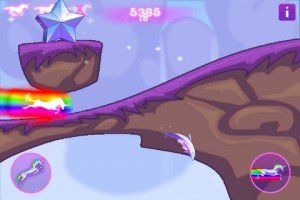 sound effects of the game are just as glorious as the main theme song. As the unicorn is running, you can hear the gallops of this majestic creature. When the dolphins hit the screen, you are greeted with the beautiful and subtle sounds of their cries. As each star is destroyed, there is a loud explosion that will bring a smile to any gamer.

Controlling the unicorn is a breeze. The lower left side of the screen features the “Jump / Double Jump” button. Master the use of this button and you can control the length, height, anddistance of the unicorn’s jumps. On the right side of the screen is the “Dash” control, which can be used to destroy giant stars. Your unicorn can only jump two times in the air before needing to return to the surface of an island. However, you can use the dash right after the unicorn jumps twice. This will extend the length of the jump and possibly save the unicorn from falling to its death.

An easy control scheme, solid game play, unicorns, dolphins, killer stars, and an awesome soundtrack make this game worth the 99 cents. If you purchase the game, post the high scores of your three wishes in the comments below. Let’s see if you have what it takes to beat my score.