Ragnarok Online is a well-known, 3D Fantasy MMORPG created by a Korea-based company named Gravity and released in North America in June 2003. Based on the Manhwa Ragnarok by Lee Myung-jin, the game has seen well over a million dedicated players within these past nine years! This Manhwa-inspired game focuses on Norse Mythology, hence the name “Ragnarok”, which basically means “the end of the world”. Alhough one of the drawbacks to this game is that there isn’t a main 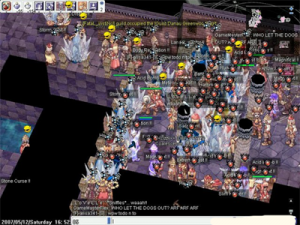 storyline. Well… there is, but you would have to really look for it. When you begin playing the game you start out in the realm of Midgard as a Novice, which basically is the whole story. If you do take the time to read and enjoy the game, the NPCs tell you bits and pieces of what’s happening in the world and what you’re meant to do, which is save it, as you must do in many games of this sort. If you’ve done your homework on Norse Mythology then you should understand most of the game, but if you haven’t then you can still enjoy the game for its beautiful graphics and engaging content.

Players can move around and explore the world through simple yet polished point-and-click controls, and the game’s anime-inspired graphics and uniquely designed sprites help create a memorable gaming experience. Player characters interact in a 3D environment but are represented by 2D character sprites for front, back, side and diagonal orientations. Apparently, more

than one person appreciated this, as both Secret of the Solstice and Water Margin Online mimic the game’s graphical style. Ragnarok Online has an interesting system where players have two levels: a ‘base level’ and a ‘job level’. Whenever you gain experience points, both your base and job levels will advance, but the job level tends to level up slower. Each base level grants stat points that can be allocated into different attributes, while each job level earns you a single skill point. What really makes Ragnarok Online feel like a complete and comprehensive game is the large selection of job advancements.

You start off as a novice that can become one of six basic classes – Swordsman, Mage, Archer, Merchant, Thief, or Acolyte – and four “extended” classes: Super Novice, Taekwon, Ninja, and Gunslinger. When you hit the maximum job level you can then choose one of two advancement classes. When you reach the maximum level once again, you will be reborn as a “high” novice (and no, you don’t go off smoking anything). As you level your way back up, you will become a “transcendent” version of your prior job. But wait, there’s more! You will now become the third job class, and of course you must once again level all the way back to the top. Have I lost you yet? Good. I’ll plop down a character class tree so you can fully understand the tangled mess of classes.

As you progress, you gain more abilities and must find tougher opponents. There is no good way to know how strong an enemy is outside of spending time in the game or visiting a site that has cataloged the bestiary. Speaking with other players is helpful, since the towns are always full of people. Prontera is the main town and the most crowded throughout the whole game, especially in terms of vending, although many are merchant characters who are idle, leaving their avatar to sell goods. Players can open a chat room, which appears as a bubble over the character’s head. Others may join in and talk or, if the player is a merchant, buy goods. Although a good number of player characters may be found, it’s hard to gauge how many are actively playing and how many are just sitting and idly waiting for others to buy their overpriced equipment and potions.

The music in Ragnarok Online is one of the best parts of the game. When entering a new town or area, you’re greeted with crisp WAV files playing catchy, pop-like instrumentals, while brooding piano solos play when you face a horde of monsters. Many of the symphonies are very catchy, especially one in particular: the Title Screen background music. Anyone who has played Ragnarok Online has heard that music and will either love it and feel completely nostalgic or hate it. Then comes the dreaded sounds of the game. There’s not a large variation of sound – the impact sound of a sword sounds the same for all swords, be they gigantic claymores or tiny rapiers; the sound of a sword swinging through the air sounds exactly the same as a wand or knife; a giant axe sounds the same as a large mallet when hitting its target. There should be a much larger variation here, with one sound in each of these categories.

Another of Ragnarok Online‘s well-known features is the crafting, but it’s not something everyone will experience. Merchants can go on to become blacksmiths, but other classes must depend on them to

craft items. However, players do have the option to upgrade their equipment outside of the merchants. Ragnarok Online uses a system of cards similar to the socketed weapons in the Diablo games, where higher-level items will have a number of empty card slots in them. Monsters will drop cards that have different capabilities depending on what is on the face, and a card may be placed in a card slot to augment the item. A card that offers 10% strength may be fitted to a sword to give the bonus to the player wielding the weapon. Also like Diablo, once the card is fitted, it cannot be removed, so caution is advised. The game has over 700 cards to find, with many different combinations to discover!

Cards are great, and there are two reasons to hunt them. The single most popular aspect of Ragnarok Online is the ‘War of Emperium’ feature. This is a series of massive guild wars between all the qualified guilds on the server. The wars only occur once a week for a period of two hours. The War of Emperium takes place in a series of castles throughout many towns available in the game, and the purpose of the battle is to try and capture the ‘Emperium’ inside a castle. Whichever guild successfully captures and holds their castle will have the benefit of exploring a special dungeon and have their guild name and banner recognized on the server until the next War of Emperium.  The whole process of taking over a castle is incredible chaotic, and the more spells that are casted, the more the lag spikes like crazy.

The gameplay is the strongest aspect to the game, and as for the dozens of classes to choose from, you’ll enjoy trying out every one since they all have so many skills and different play styles depending on the stats you choose to build up. Ragnarok Online‘s PvP and the War of Emperium will be like your second home. The only issue is that to advance to your third job (transcendent class), you must be reborn and start back at level 1 to level up again, which can be extremely tedious. Although with help from friends, this process can be sped up, which helps to offset the monotony. Gravity adds new updates frequently that offer new maps, monsters, and items to acquire, and now that it’s free-to-play, why not give it a go? There’s nothing to lose other than a few hours, and once you struggle through the beginning, the rest of the game is extremely fun and exciting!