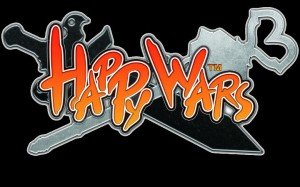 F2P (Free to Play) MMOs are a popular genre of game on the market nowadays, and developers are moving towards releasing more F2P titles for the console. One of the first titles introduced as an Xbox Live exclusive is Happy Wars, developed by Toylogic and published by Microsoft Studios. Happy Wars takes the general concept of player vs. player skirmish warfare and simplifies it down to make it easy to play for Xbox Live Gold members; at least, that’s what most would hope for. 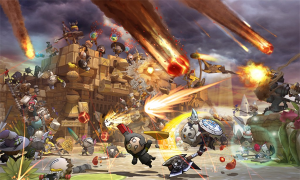 The game starts off by introducing you to the basic premise of the story behind the game. Simply put, there are two kingdoms in the world: light and dark. Both are at conflict with one another over pretty much anything you can think of and are willing to go to war over the smallest issue. You jump into the fray, assuming the role of a soldier, mage, or cleric of the light kingdom, and are immediately sent off on a mission to rescue the princess. The one flaw with the single player campaign that can’t be ignored is the lack of single player progression. You have to play multiplayer to better your rank in order to continue playing solo, making the point of a single player experience lackluster, regrettably disappointing, and virtually useless.

Graphically, Happy Wars can be fairly appealing for all ages. Its style is simple enough to bring back fond memories of the Bomberman games and it’s blocky, cartoon based art style that’s rarely used today. The character models take a more comedic approach, which is a nice change of pace from the more serious conceptual character design that dominates today’s gaming; turning your enemies into pretty flowers doesn’t hurt either. One bonus is the composed music. It plays in the background, giving a nice tone which can make anyone feel ready for a great battle. The mechanics are also very smooth, and each class is easy to learn, thanks to the tutorial mode. However, the only downfall with the mechanics is their failure to maintain consistency in proper control mechanics. When standing in front of something as simple as a gate, having to push the left trigger 4-5 times to open the gate seems like a bit of overkill. 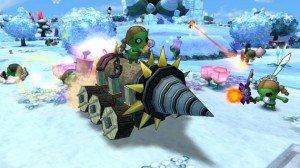 The multiplayer mixes it up with some good ol’ fashion 15-on-15 PvP matches. While the whole experience can be a fun one, there are some serious problems that make it barely playable. The matchmaking system is fundamentally flawed, taking far too long to get into a match, or even disconnecting you completely, causing you to spend a ridiculous amount of time just to get into a single match. Spending anywhere from 30 minutes to an hour or more just to get into a 10-15 minute match is ridiculous by any multiplayer game’s standards. Secondly, Happy Wars adopts a P2W model (Pay to Win), as you can spend coins to get strong enough to overpower your opponents. This makes it unfair across the playing field, and will ultimately turn players away from the game. The experience becomes less about a skill based challenge, and more about being a higher rank and having better gear in order to win, which that takes the fun out of any game.

It would be wrong not to mention the astonishing size of the customization system. There’s literally thousands of combinations when it comes to gear as you slowly (very slowly) progress through the game. During your progression, you gain gear and currency called “Happy Stars”. You can then use these “Happy Stars” to gamble, pressing your luck to hopefully get better loot. If you’re looking to support the developers, you can spend Microsoft points on “Happy Tickets” and visit the item shop to purchase weapon sets, armor sets, hair styles, etc. 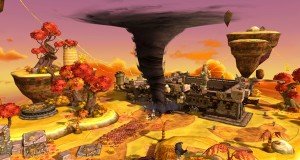 Happy Wars will be known as a pioneer for F2P on the Xbox 360, and it has the advantage of being the only F2P Xbox 360 game on the current market. The art style and the fact that its F2P are the only things that save this game from being passed over entirely. The single player is non-existent, unless you play the multiplayer to raise your overall rank. You’ll be lucky to get into a match, thanks to the broken matchmaking system. The “Pay to Win” Model will eliminate any fair chance of you winning based on skill, at least as long as there are people willing to pay out money or in-game currency to make their characters stronger, which there always will be. Overall, Happy Wars may be the first game taking up the F2P flag for the Xbox 360, but it might be the one developers look at as a lesson in the future to identify blatant flaws and improve upon them.

This review is based on a review copy of the Xbox 360 version of Happy Wars developled by Toylogic Inc, published by Microsoft Studios