If you haven’t noticed, the casual mobile gamer has a new game of choice: Draw Something. It seems that everyone with a smart phone or tablet is playing Draw Something. There are two versions of the game available for download: a free version and a paid version. The free version is great for users who want to try it out, but the paid version offers gamers more words, more colors, and, of course, no advertisements. This highly addictive game, produced by OMGPOP Games, 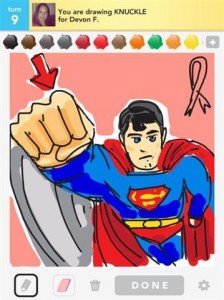 is available to download via the iTunes or Google Play marketplaces.

Draw Something takes a lot from the classic board game Pictionary, while adding a touch of Text Twist. Draw Something takes what is best about Pictionary and delivers a stripped down, hassle-free version that makes this game playable and enjoyable by just about anyone. Additionally, when you combine the word-puzzle elements of Text Twist with the chance to create something so wonderful that the late Bob Ross would be proud, this game quickly becomes a must-play. The game has done a fantastic job of taking out all the elements that made the aforementioned games bad, including having to be in the same room as others, those dreadful Tuesday family game nights, and hearing everyone yelling the same wrong word over and over again.

The success of Draw Something is based on its simple, repetitive, highly addictive gameplay. To see which of your friends is playing, use your e-mail address or Facebook account to log on. When you start a game, you will be given the chance to draw one of three of words. Each word is worth a different amount of coins: difficult words are worth three coins 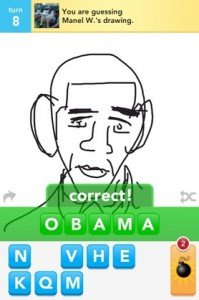 , while easy words are worth one coin. Once you draw the picture, you send it to your friend. Your friend will then watch how you created the art and uses the letters at the bottom of the screen to guess what was drawn. Correct responses will award the player the amount of coins the word was worth. The game will continue until one player is unable to solve what the other player was trying to draw. However, new games start automatically, so you never have to restart a game manually. If you have trouble solving the puzzle, you can use bombs, which are found in the lower right corner of the screen.  The bomb eliminates incorrect letters from the letter bank, which is always helpful when you have no idea what the person is trying to draw.

When you start playing Draw Something, you won’t have access to lots of colors, but this is where the coins come into play. As mentioned earlier, you earn coins by solving puzzles. You can then spend these coins on a number of different things. You can purchase a color pack that gives you access to more colors or more bombs, just in case your friends and family aren’t good artists. Either of these options cost a good amount of coins, so make sure you save up!

With over 25 million downloads, OMGPOP created one of the most popular games available. There are many reasons for its overwhelming popularity, but the ability to play contacts from your 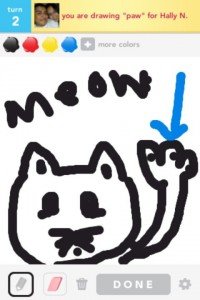 Facebook or e-mail contacts makes this game incredibly accessible. This game allows iOS users and Android gamers to play together, and that surely had a hand in making this game rise to the top. Most gamers will find that they know plenty of people who are already playing this game, but for the addicted player, try your luck against a random opponent. Finally, the ability to watch your opponent solve the puzzle is a wonderful touch. OMGPOP has put in a lot effort to make sure its users have a wonderful experience, and it shows in the product.

Draw Something is such a great game that is leaves little room for critiquing. The only negative thing that can be said is the game cannot be played in landscape mode. Having the ability to switch to landscape mode would help gamers with smaller screen devices create more majestic works of art. It is a minor inconvenience, but could really help out the lower-tier smart phone user.

Draw Something is an incredibly well made game, and it deserves our highest recommendation. Both hardcore gamers and casual gamers alike should be playing and enjoying this game. The developers at OMGPOP games should be on your radar, as well. Considering that this company was just purchased by Zynga, look for big things to come out of OMGPOP soon. I give this game 10 out 10 pictures solved.

This review is based on a retail copy of the Android version of Draw Something by OMGPOP Games.