Dark Souls is one of those rare games that seem to have learned the lessons of the failed games that came before it, and it manages to surpass everyone’s expectations in the best ways possible. Dark Souls is really just that special a game, and could be for every role-playing game fan under the right circumstances. The game is very difficult because it is completely unforgiving if you make a mistake. If you fail to strike the correct appendage, or you use an ineffective weapon, you can’t progress. But you never feel as if the game is cheating you out of victory, and when a game plays fair, it is hard not to love it.

Most people remember Demon’s Souls, the masterful and notoriously difficult predecessor to Dark Souls. The team at 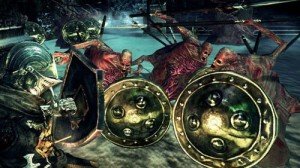 Namco Bandai has used the momentum of the first game and taken the concept to the next level. At first glance, Dark Souls looks and feels a lot like Demon’s Souls. At heart, it is a third-person dungeon-crawling RPG. You’ll spend most of your time in a dank pit or a dark corridor, battling everything that crawls out of the darkness towards you. This time around, the environments in which you do battle have changed dramatically. In Demon’s Souls you were in the Nexus, a hub that connected you to all the realms in the kingdom, while Dark Souls has a number of hubs throughout the game. You’ll eventually be able to move from hub to hub, but in the beginning, it is just one. Every branch of each hub is guarded by a boss and you must defeat the boss to move forward. Areas with better loot are guarded by stronger bosses. It is up to you to determine where you need to go and when to take on the stronger bosses.

As in Demon’s Souls, there is very little information about what is going on around you as you play. You just have to fight on and figure out what you need to do and how you are going to do it. This feeling of isolation really adds to the atmosphere present in Dark Souls. You’ll find yourself feeling like most of the characters you encounter in the realm. 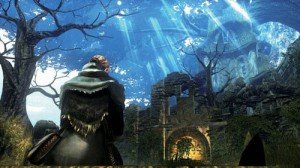 After a short while most players will find themselves systematically planning their next assault on the towering beasts in front of them. Few games give you the level of satisfaction of defeating opponents like Dark Souls does.

When you slay enemies, you acquire souls, which are the game’s currency and are used for everything from buying items to levelling up your character. If you die on your quest, you have one opportunity during your next life to reach the souls you dropped. If you die before you get the dropped souls, they disappear. This leaves players in an interesting position: do you go back and try to grab you lost souls or do you forge a new path? Better yet, do you spend your souls to level up or do you buy that new, shiny sword? Those questions add to the suspense of every battle you fight and make you think and plan your actions. This isn’t a game you can rush through, and when a game makes you think, the smallest accomplishments become personal triumphs – the mark of a great game.

Dark Souls features an unusual online multiplayer system. Throughout the levels you will see 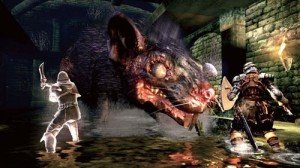 messages left by other players. Some are helpful, warning you of danger ahead, while other messages are just spam. You will also see ghost-like players running around you – these are other people playing the game at the same time you are. You should watch them as they move through the level to see how they die, as by doing this you’ll know what to avoid ahead. There is also a way to summon other players into your world or for you to be summoned into theirs. It is an incredibly fun system, but we found it a little difficult to pull off because the summoning player needs an item called “humanity”. Once you have found some humanity, you must go back to the checkpoint and use it, and only then can players be summoned into your game. However, if you die, you will lose your humanity and you’ll need to find another one. It isn’t as user-friendly as we would have liked it to be. Either way, the multiplayer system works great once you’ve met the correct conditions. You can get as much or as little help as you like while maintaining that feeling of isolation.

Dark Souls is probably one of the best games of 2011. Its dark corridors holds plenty of mystery, dangers, and treasure to keep you playing the game for a long time to come. It will challenge you and even try your patience, but if you stay strong you will be rewarded for your efforts. We highly recommend this game to anyone looking for an amazing RPG experience.