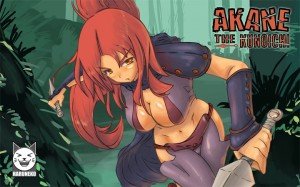 Akane the Kunoichi, published by Haruneko Entertainment, is a bastion of old-school fun in the sea of all the “me too” iPhone games out there. Very reminiscent of such classics as Shinobi and Ninja Gaiden, it delivers a very satisfying arcade experience that you can take with you on the go via your iOS device. 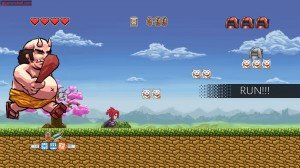 The story is pretty irrelevant to the game as a whole, but here it is. You are the beautiful and busty ninja girl named Akane, who is secretly in love with her master, a noble samurai named Goro. As things will go in this type of game, Goro gets kidnapped and Akane has to rescue him. These types of games never have very deep stories, and Akane is no different.

The level structure is set up like a lot of other iOS games on the App Store, as there are five areas with three levels each, with the third level of each area being a boss fight. You can pick any level that you have already beaten to play again, or you can play the next level that you have unlocked by finishing the previous level.

Graphically, the game is nothing special, but it does have a very clean and cartoonish style, and the drawing of Akane in the title screen and when you perform ninja magic is pretty to look at. The overall game is done in a chibi, or “super deformed”, style, which gives it a really cute look, and the sprites are animated well enough to get the job done. It really looks like you are playing a game that could have been released on the Sega Genesis or Super Nintendo, except in a slightly higher resolution. There are some impressive details here and there, like when Akane throws her shuriken and it bounces off a wall, or when certain enemies throw hats at you, they react pretty realistically. Another graphical highlight are the bosses, which are all designed 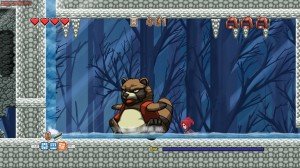 really well and are gigantic in size compared to everything else.

The audio of the game is about on par with the graphics. Nothing really stands out here, but all the actions in the game are matched with an appropriate sound. The music, while relatively generic, doesn’t detract from the experience. It’s a suitable mix of mellow background music and heart-pumping guitar rock for when the action heats up, such as in a boss fight, for instance.

The gameplay is what really shines in this game. It is a ninja action game, so you will control Akane as she runs and jumps around each level, fights enemies using her thrown shuriken, and casts various ninja magic spells to destroy her enemies. The platforming elements are what you would expect from this type of game, and there are some really challenging “do or die” jumps to be made, but that is all part of the fun. Akane can also jump toward and stick to walls, another ninja staple that is used to great effect in the game. The combat is very solid and satisfying, and it can get

pretty tactical, as there are various types of enemies that all take different strategies to overcome. Akane also has ninja magic at her disposal, which she can use in one of two flavors; straight forward to obliterate all enemies in a direct line, or an all-around attack that does less damage, but goes in all directions. The bosses are also very fun to fight against, as you need to employ tactics and skill to beat these encounters.

The action can also get pretty hectic when you are trying to navigate the level while avoiding the enemies’ attacks. It all combines to make this game a real joy to play, and it is deep enough that it makes you want to replay the level. There are also three kimonos in each level to collect, which adds to the replay factor.

Overall, this is a great action game with no real flaws to mention, and any fan of the old-school classics mentioned at the beginning of this review who want a similar experience on their iOS device should not hesitate to grab this off of the App Store right now.