After playing through previous entries in the Dusk Alchemist RPG trilogy, known to feature deep crafting systems, traditional turn-based combat and overall well-polished stories and presentations, game developer Gust immediately won me over and made me a fan for their show of quality. Gust managed to add a bit of depth in certain areas that other games in the genre should take note of and implement to freshen up the otherwise stale RPG formula. They still follow what feels like a paint-by-number approach to RPG design but manage to make fun games with great character relationships to explore, a wonderful visual presentation and sound design to make for a great packaged experience. 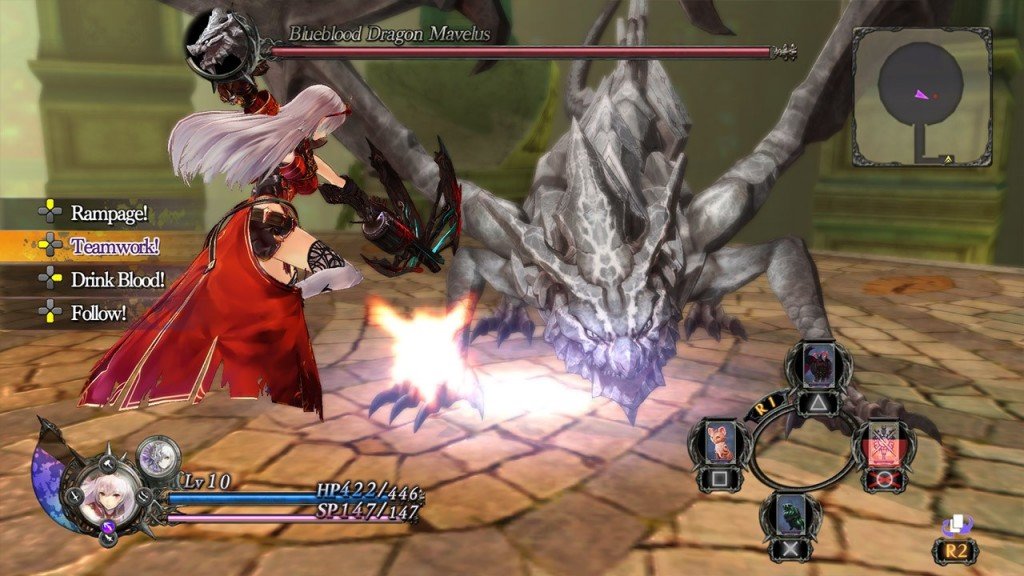 With Nights of Azure, Gust takes a departure from the slower, more traditional turn-based combat RPG genre and takes a stab at and fully embraces the action RPG genre. But does Gust bring anything fresh or new to the action RPG formula the way it does with the traditional turn-based RPG? Well no, not a lot, but it doesn’t matter. While Nights of Azure follows a typical action RPG template, it still makes for a fun experience and manages to make it worth your while by making decisions to streamline progression as much as possible in order to get you back into the action as quickly as possible. This was a bit surprising, because while Nights has a constant forward moving momentum going for it, which is great, the game only really slows down when you stop for story elements via Japanese voice-only animated cut-scenes. The story is actually pretty good on its own, and sub-quests can be ignored if you so choose.  Even something as simple as making side story elements optional adds a very progressive design element that enables the player to choose how to better spend their time without penalty. This actually makes a lot of sense. Whereas Atelier games have more of a passive approach to gameplay allowing you to take your time to tackle objectives, Nights just wants you to keep moving on–hacking-and-slashing, only stopping when necessary like when needing to upgrade party members or your own character stats and abilities.

Nights and Atelier games might share beautiful art and character design, but Nights has a much darker theme, mature story, and atmosphere in comparison to the usual cheery and whimsical fantasy settings of the Atelier series. I would even go as far as to say that Nights of Azure takes a surprisingly dark turn and feels closer in atmosphere and story to a Bloodborne or Devil May Cry, although with a cute anime aesthetic. The game takes place on an uncharted and abandoned island covered in eternal night. The landscape and architecture are influenced by a mix European and Gothic styles featuring churches, castle ruins, and urban city quarters. 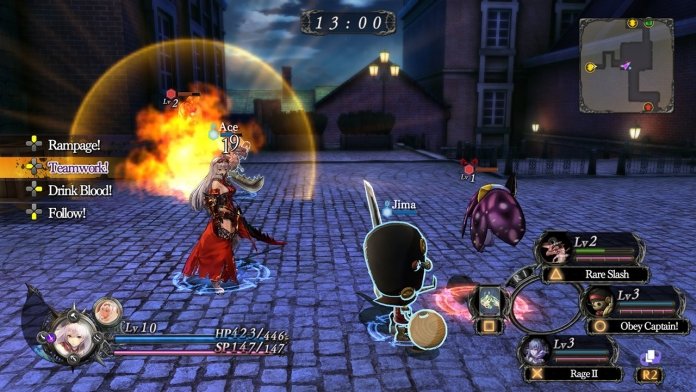 Actually, Nights of Azure plays a lot like a combination between Devil May Cry and a Tales or Kingdom Hearts game. The main female protagonist Arnice, is a Holy Knight sent by the Pope to purify the corruption on the island caused by the demons, and can use blue blood collected from defeated enemies to empower herself and unlock new abilities at her headquarters, called the Ende Hotel which serves as a main hub and also hosts NPCs and vendors for item purchases and character upgrades. Azure, meaning the color blue, refers to the blue blood spilled by demons, which also turned the former inhabitants of this island into monsters.

Arnice shares many similarities to Dante, the protagonist from DMC, from appearance and gameplay style, like the light colored hair and stylish long red coat, to the variety of optional weapons choices she can switch to on the fly such as a long sword, daggers, or guns which also alter her combat move set and offer different defensive and offensive attributes. Like Dante, Arnice is half-human and half-demon and can transform into very powerful demon forms for a short amount of time when a special meter is filled. Her move set is limited to a weak, strong and super attack which she can also be utilized to perform stylish combos. Arnice is very powerful and moves very fast, dashing along labyrinths hacking and slashing at waves of enemies like in Dynasty Warriors, but she also has the ability to summon demon pets for support, called Servans.

Some of the boss fights at the end of each area are no joke either. While Arnice seems quite overpowered from the beginning of the game, there are some difficulty barriers nearing the end of the game in terms of the increase of enemies on screen and some tough bosses which will result in many full party wipeouts and multiple death screens, but these pet demons, like Pokemon, can gain experience and power, unlocking new abilities the more you utilize them in combat. It is an added incentive to grinding, but for the most part, the pets do a good job of keeping up with your level so you don’t necessarily feel forced to grind. They serve traditional RPG party roles like support, attack and defense and you can also unleash powerful attacks from each of them. New Servans can be found through exploration and enemy drops.

Finally, one of the most progressive elements displayed by the game is in the romantic depiction of the two main female characters. Gust has always done a wonderful job in the depiction of relationships between its protagonists, romantic or otherwise, in many Atelier games. In fact, many of their support characters are great as well. But it is very rare to see a same-sex relationship play such an integral part to the story in any game. It is little details like this that make an otherwise old formula feel fresh again. Fun, breezy and intuitive combat action with stylish flair and progressive touches to its story make the game something special. The whimsical art design, soundtrack, and visual flair create an all-around complete package. It’s also on the short side as RPGs go, which is always a positive in my book.