Turtle Beach has long been a trusted name amongst gamers when it comes to quality headsets and the Titanfall Ear Force Atlas Official Gaming Headset is no different. If you stick to the Microsoft variety of devices (Xbox One, Xbox 360, and PC) this headset has everything you need for some serious gaming sessions. While EA’s highly anticipated Titanfall will likely be a system seller, read on to see if Turtle Beach’s Titanfall Ear Force Atlas is the right headset for you.

While there are certainly many different circumaural headphones (fully encompass your ears) on the market, the Titanfall Ear Force Atlas headset do a great job of not only delivering fantastic sound quality but also attenuate outside noise allowing you to really get engaged with the sounds you hear, whether that’s in game or simply listening to music. Volume control is easy whether you are using the in-line amplifier or the Microsoft dongle connected to the bottom of your Xbox One controller.

One thing that I can’t emphasize enough is that if you plan to use the Titalfall Ear Force Atlas headset with your Xbox One, make sure you upgrade your controller. Right out of the box I was so excited to use the headset, that I just plugged everything right up and tried to use it. While the sound did work, I noticed that sometimes the audio would crackle as if the speakers were blown. After I performed the controller update, I never had this problem again. Sadly given that the Xbox One’s audio is currently transmitted wirelessly to the controller using stereo sound only, the lack of surround sound when playing games poses a small problem to the FPS crowd. Should Microsoft upgrade their signal later via an update, the headset is tuned for surround sound and this will be a moot point. The boom microphone is fantastic. It delivers crisp sound deliverance to your teammates in game, or for any other use case such a Skype call. 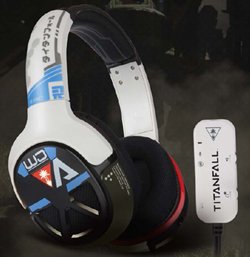 The Xbox One dongle easily snaps onto the bottom of the Xbox One controller and provides easy access to managing all aspects of the audio from in-game chat, game audio, muting the microphone, and of course volume. Additionally should you decide to use the headset with the Xbox 360 or PC you get the Inline Amplifier so that the headset can still be used. Regardless of your setup, right out of the box you get the cables you need to use the headset, even if that means using an RCA cable or the legacy trapezoidal AV connector on the original Xbox 360 or Slim. One nice touch that I do like is that the microphone is removable, providing the flexibility to use the Titanfall Ear Force Atlas headset for everyday use while listening to music on my phone.

Physical appearance and design are in my opinion very important with headsets. All too often headsets just end up looking the same, time and time again. The Titanfall Ear Force Atlas does not suffer from this issue as it is designed with the Titanfall theme, even down to the Japanese Katakana writing spelling out “Titanfall”.

It is important to note that while the Titanfall Ear Force Atlas headset is officially licensed for the Xbox One, you can certainly use it for others. With the packaging you get an in-line amplifier so that you can use it for both Xbox 360 and PC and given the fact that the headset connects with a standard stereo cable, you could even plug it into your PS4 controller if you wanted. In terms of value though, looking at the $150 price tag, you might think to yourself why not just pick up the Ear Force XO Four for $50 cheaper. If you exclusively play Xbox One (or mobile games), an XO Four might be an option for you, but if you are looking to use a single headset for your legacy Xbox 360 or for PC gaming, the extra $50 is negligible. 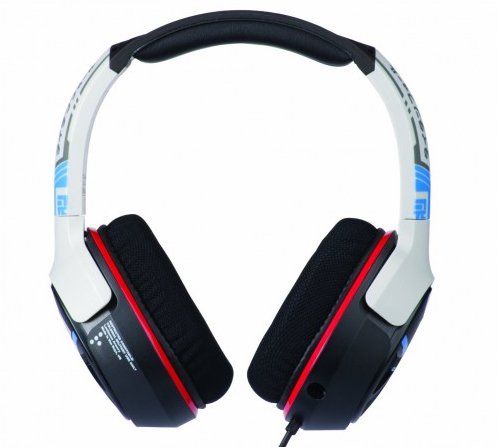 When I first picked up the headset, I noticed that the material for extending the headset to fit over my head was fairly rigid, providing a fairly snug grip on my ears. Initially I thought that this would prove to be uncomfortable over some of my longer gaming stretches, but honestly it never really bothered me. That being said, if you happen to have a larger head, as I think my head size is fairly average, this might prove to cause some minor discomfort. The ear cups themselves provide suitable cushion even after prolonged use. In terms of usability, aside from upgrading the controller for the Xbox One (which even that is very simple), everything is pretty standard and easy to setup.

Turtle Beach is known for making quality headsets and the Titanfall Ear Force Atlus is certainly no exception. While the best experience I’ve had is through using the headset with the Xbox One, it is by far not the only way to use (and enjoy) the headset as it provides the flexibility to be used for the Xbox 360, PC, and mobile gaming, all of which provide a great audio experience. While you will have considerable more cables if using the Xbox 360 with the headset, the end result (fantastic sound) is well worth it. The headset is comfortable, stylish, and well worth the money if you are looking to pick up a premium headset.