Plantronics has really been pushing into the gaming headset market recently and gamers have benefited from the move. Not only do gamers get a quality headset for a great price but they get the reputation of a company that is known for their sound quality. First came the Plantronics Gamecom Commander, but admittedly, this headset was not meant for the average gamer. Sure it was a brilliant headset, but the price and the size would prove to burden most gamers on a budget or those with space constraints. Now comes the Plantronics RIG, a multipurpose headset designed and priced for the average consumer. This headset bumps the Plantronics 780 off the pedestal but more importantly, it contains some features that will change what gamers will expect from headsets forever.

As you would expect from any Plantronics headset, the Plantronics RIG sounds great. However, the sound quality will vary depending on how you connect it to your system. If you use the optical connection, you will gain the benefit of a virtual surround. If you opt for the RCA piggyback cables, you will lose some of the higher sounds functions. Either method you choose, the headset will deliver a clear, crisp signal that has become a staple of Plantronics design. This headset is also particularly good with low-end response. The RIG has a bass-boost option to customize the low-end response, whether you prefer a lot of base or a more neutral mixing. Unfortunately, this headset is not noise-cancelling or noise-dampening so use in loud environments are not recommended for this model.

The extra features of the RIG are really driving the buzz around this particular model. At the center of it, is the mixer or MIXR as Plantronics calls is. This acts as the brain of the setup and everything plugs into the MIXR. This is also where the controls for the unit are found. On the top of the Mixer is a large perimeter dial that controls the master volume in the headset. Inside the perimeter, you’ll find two smaller sliders. One slider controls the game volume and the other slider controls the auxiliary volume. In the middle of the MIXR is a large toggle switch. At any time, you can flip the toggle switch from one side to the other and this controls which device you will be speaking two, while the unit automatically softens the other side of the toggle. This functionality allows you to play a game, switch over to a phone call and switch back without ever taking off the headset and neither party will notice. This design works great and it gives you the chance to finally be able to control what you hear, when you hear it and who hears you all from a single control box. Obviously this feature is unique and it makes this headset standout in a very crowded marketplace.

On its own, the Plantronics RIG is a nicely constructed headset. The ear cups fold so that the headset can be stored flat allowing for easy storage. Even though the ear cups pivot, they still sit firmly in place on your head, which is one of the bigger problems of folding headsets. The headset also has a removable boom mic which can be swapped for a mobile style mic if you just wanted to use the headset on the go. Considering the design of the removable boom, it is on of the best designs we came across. However, the boom itself is not very flexible, so getting it into a custom position is challenging. It should be noted that we never encountered a problem with the mic picking up sound so this issue shouldn’t give anyone problems. Finally, this headset has the ability to connect to anything you want it to whether that is your PS3, Xbox 360, iPod, tablet, phone or PC. The built in flexibility is great and it is a trend that we feel will become a staple for all headsets in the future. Luckily the Plantronics RIG is ahead of its time and positions itself as your go to headset. No matter the application, the RIG can deliver your sound needs no matter what you throw at it.

Overall, this headset has a number of great features, but the reason you are buying this headset is because of the MIXR. The ability to switch between your game and another device is something that hasn’t been seen with this level of control. It is a great feature and it is one that will be emulated in future headsets. 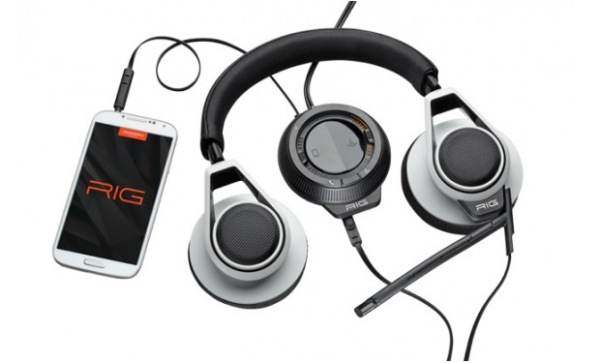 Priced at an MSRP of $129.99, this headset is targeted for everyone. To get these kinds of features from a headset, you can easily spend over $300 or more. Thankfully, Plantronics have developed a way to give the public a quality headset for an amazing price. As we mentioned earlier, there are some missing features that will prevent people from using this specific headset for tournament use or other specialized applications. However, as long as you are doing your everyday gaming-type applications, this headset will certainly exceed your expectations. When you consider that this headset is on the very low-end for this type of headset, you’ll have a hard time finding a better deal, which is why this headset gets top marks for value.

We found that the RIG was fairly easy to set up no matter which application you wanted to use it for, though some applications were easier than others. We encountered a few issues when connecting our PS3 to the RIG via an optical cable. However, that is a known issue with our specific model of PlayStation so the issues could have been on our end. However, when we plugged the set into the Xbox 360 via the optical cable, we encountered no issues at all. Then switching from a console to a PC or mobile application, you simply remove the mic and plug-in the mobile cord or USB connection and it works great just like that. The versatility of the headset would lead some to believe that this was a difficult headset to use, but we found that not to be the case at all. The documentation was good and everything seems to work right away, which is about the most you can ask for from a premium headset.

As far as comfort was concerned, we found the headset to be quite comfortable. The headset features a generous amount of memory foam on the ear cups and headband. The foam was then covered with a cloth-like speaker material. It did a nice job keeping our head cool during long periods of play while still remaining sweat-free and comfortable. The headband adjusts like most headsets do, so it manages to fit most people in most situations. Overall, the headset fit well and we are sure it will suit most people just fine.

Overall, the Plantronics RIG is the strongest offering from the Plantronics gaming line yet. It is a headset that was designed with the average gamer in mind. With a small investment, you get an extremely versatile and unique headset that will serve gamers well no matter what or how they play. This is a big step forward for Plantronics and with the way this headset is retailing, there is no reason why anyone should not get this headset unless you have a very specific application that requires other types of headsets. We highly recommend this headset for anyone in the market and we are sure that the RIG is going to impress you, just like it did with us.