There is something quite infuriating about needing AA batteries to use a wireless controller in this day and age, which still leaves me a little put off when using the Xbox One controller. What makes matters even worse is that there is no way to check how much battery life you have left on the Xbox One controller whether you use AA batteries or even if you use a Microsoft rechargeable battery pack. So when you are playing online and your battery just dies and turns off your controller, instead of scrambling to find some batteries to throw in quickly before you get p0wned, do yourself a favor and pickup Nyko’s Charge Base and avoid the headache and drama all together.

Nyko’s Charge Base solves all the above problems. For starters it comes with two rechargeable battery packs that fit perfectly into the Xbox One controller, thus doing away with the constant need for AA batteries. Couple that with a sleek dock where you can easily charge two controllers at a time and monitor their charge levels and you got yourself a winning ticket. Let me be clear, you still will not be able to verify your battery life in-game. You will however be able to throw it on the charger before you start to know roughly where you stand. 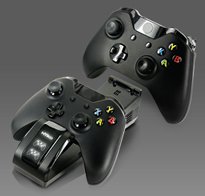 The setup is easy. Simply plug the dock into the wall, plop the provided battery pack into the controller, put on the provided back cover, and dump your controller in the dock. At $29.99 retail, the Nyko Charge Base isn’t bad at all, especially when you consider that you get two rechargeable battery packs being thrown in with the dock. I haven’t had any issues with placing my controllers in the dock or getting the packs to charge.  If you are tired of the hassle of AA batteries and want the ease of just picking up your controller and playing, the Nyko Charge Base will definitely do the trick.