From commanding gargantuan armies to building a local teahouse, Nobunaga’s Ambition: Sphere of Influence has deep varied gameplay that proves that any action, no matter how large or small can have repercussions that will ripple outwards and affect the strength and power of your Japanese clan. After wading through the lengthy and obtuse tutorial, Nobunaga’s Ambition opens up to incredibly rich, yet often overwhelming gameplay that may scare off some people at the beginning. Although for those willing to stick around it can become incredibly rewarding as you dive deeper and deeper into the games mechanics. After my first few hours with Sphere of Influence the gameplay finally clicked and I was absolutely hooked. 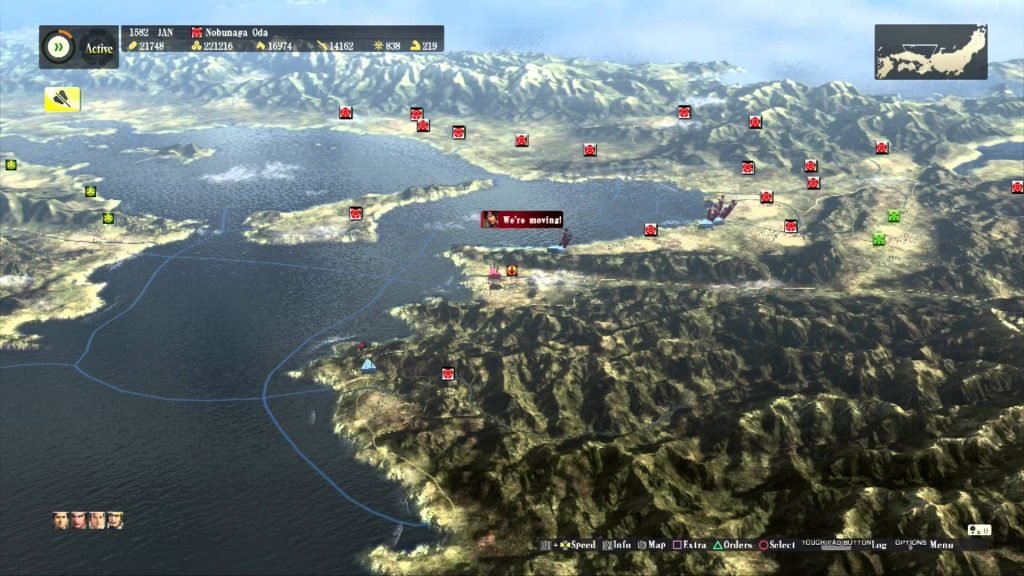 Nobunaga’s Ambition: Sphere of Influence is the fourteenth title in this long-running series and the first time it has hit the current generation of consoles. Sphere of Influence, like those that came before it, is set in the 16th century during the Sengoku period of feudal Japan. Oda Nobunaga was a powerful samurai warlord that was responsible for the conquering and unification of Japan. Over 9 historical campaigns and one fictional the story will unfold about what was going on during the Sengoku period and how Oda Nobunaga influenced the unification of Japan. Selecting Nobunaga’s clan is optional as players are able to choose any of the many clans that were spread across Japan. Allowing the player to craft their own take on the historical moments in feudal Japan. During each of the campaigns every so often a small dialogue heavy vignette will play out describing the more important story aspects of each of the eras. Some easily more important than others, this was a good way to show what was going on in this important part of Japan’s history, especially if you are not playing as the main clans.

Sphere of Influence has two unique gameplay phases, a turn-based base building stage where you will take control of a Daimyo to help build your clan into a powerful nation and the real-time strategy combat phase where you will use tactics and skills to try and defeat your opponent. Most of your time will be spent in the turn-based building stages. Building up your clan to become powerful enough to stand up to any adversary that opposes you. 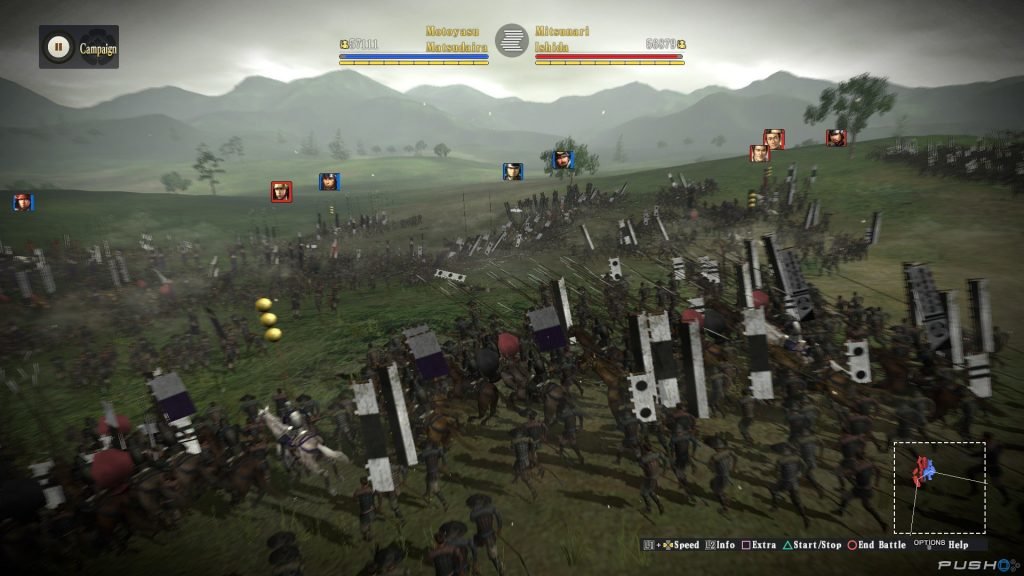 Within the base building phase lies the deep and rich mechanics that make Nobunaga’s Ambition shine. Every month your clan will have a number of resources such as money, crops, ammunitions and labour that can be spent to achieve a myriad of different things in order to help your clan thrive. The most important of these resources is labour, only having a small number of it per month you will have to determine what is more important, upgrading the walls of your fortress that is in impending danger, building farms to grow crops in one of your smaller settlements, improving local roads to increase your population or building outposts along the road for armies to stop off and resupply at. With so many options at your disposal, it is up to you to determine what is paramount to your clan. Officers are also a big part of getting things done around your clan, almost every action you do, from upgrading castle sections, to leading armies in battle needs an officer to lead the task, depending on the skills and traits of your officers should determine what tasks you ask of them. Officers not only complete tasks within your clan they can also be sent out to perform a litany of other jobs, to strike up diplomacy with other clans to help build an alliance, try and entice enemy officers to join your clan, convince local smaller tribes to support your Daimyo or even survey lands to try and discover precious resources. Having only a limited number of officers can often determine what sort of action you should send them out to achieve. Nobunaga’s Ambition makes even every little thing you do feel important. For instance, I chose to send some of my officers to local tribes to try and grow some sort of alliance, although it didn’t initially pay off when it came to times of battle, I was gifted a large number of horses that I could take into battle. And this is only one example of the many rewards you can see come back around when you put in the hard work for your people.

Despite most of your time going into the base building aspect of Sphere of Influence, the real thrill comes with the combat side of the coin. Combat can be played out in two different ways, you can choose to have it automatically play out, where the computer will judge who should win the battle or manually take over and battle the computer on the battlefield with real time strategy mechanics. I often choose to fight my own battles, especially when I was outnumbered and outgunned. Using pincer attacks to flank large armies or spear attacks to foil charging foes were one of the many ways that you can outthink and outplay your enemies as the underdog. Each of your officers is able to unlock traits and skills that you can use on the battlefield, allowing you to perform special abilities such as Trick Master, that greatly weakens enemies in front of you, or Rapid Assault, that raises your melee attack, just to name a couple. There are many of these abilities that can be equipped to your officers and knowing when to make use of them can be incredibly important when determining a win or a loss. Despite how rewarding defeating a clan can be, the combat side of Sphere of Influence isn’t as deep as the base building aspects. Officers traits and skills can play a major role however in terms of gameplay there are definitely some other games out on the market that deal with combat a lot better. 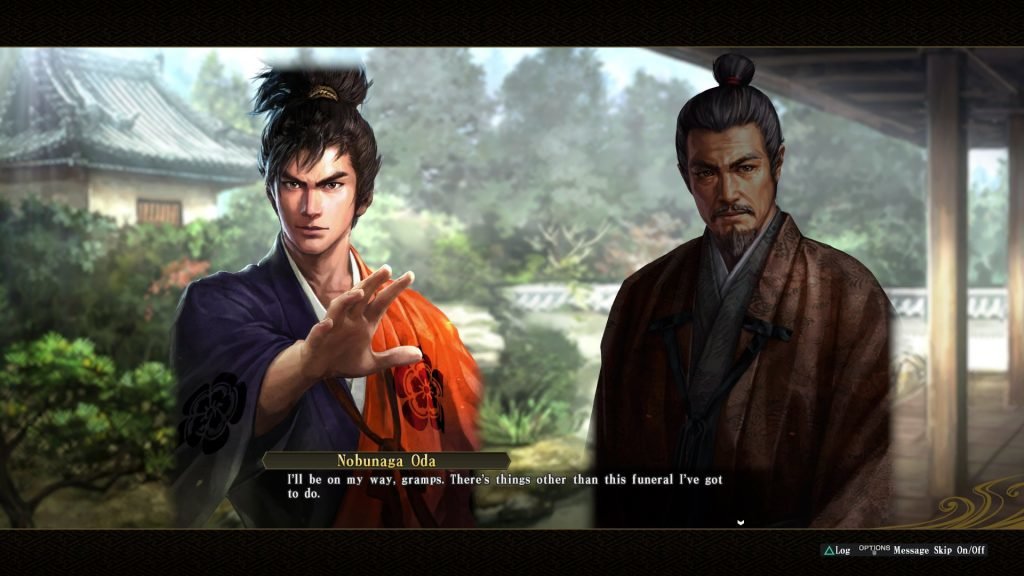 Despite originally being overwhelmed by the obtuse tutorial and deep mechanics of Nobunaga’s Ambition, the more time I spent with the game, the more I was addicted to the rich and rewarding gameplay. Gaining allies, upgrading castles, improving roads and enticing enemies are all small yet important factors along the road to having an unstoppable army. Devastating foes with my enormous army or outwitting them with precision and tactics are both amazing payoffs for all the work that I had put in on the other end. Sphere of Influence is a wonderful strategy game that, although might be a bit convoluted for some, has some great payoffs as you strive to achieve Nobunaga’s ambition.

This review is based on a review copy of the PlayStation 4 version of Nobunaga Ambition: Sphere of Influence published by Koei Tecmo Games