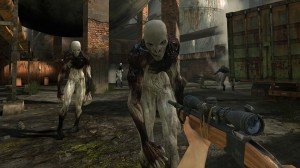 The Drowning, a post-apocalyptic FPS made for iOS devices, was announced by Ben Cousins in an interview with Eurogamer. The ex-Battlefield executive producer showed off an announcement trailer and talked about some features of the free-to-play game, particularly its most notable feature: it can be played with just two fingers.

“We did some research. We put these games with virtual sticks in front of core FPS players on console and PC, who were really skilled players, and they just hated the controls,” Cousins said. “In some respects [our system] is better than playing with a controller because we’ve got more accurate shooting and faster aiming.”

Also in the interview, Cousins compared the amount of gameplay to that of a “single-player RPG” (there are “hundreds of hours,” according to his estimate), and said that “there’s a vast amount of content available to both free players and paying players.”

Check out the interview here and the announcement trailer below.