There might still be an ominous countdown ticking over on the game’s official website, but some big news has already been revealed. According to a post by NeoGAF user Nibel, the worldwide release date for MGS V: The Phantom Pain is September 1st, 2015.

Nibel found a few video interviews with series creator Hideo Kojima on IGN’s servers. The main video has since been taken down, but a mirror can still be viewed here as of press time. 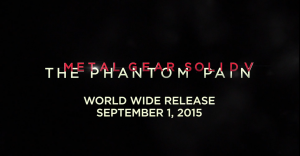 In the video, Kojima thanks everyone for their patience. Some would call this too little, too late, but at least the game has a release date now. Kojima then goes on to talk about how open-world gaming has changed interactive storytelling in big ways. Currently, Kojima and his team are putting the “finishing touches” (translated) on the game.

In short, it seems that the Metal Gear series has come full circle for Kojima. I wonder if it’ll stay that way.

MGSV: The Phantom Pain will be released September 1st for the Playstation 4, Playstation 3, Xbox One, Xbox 360, and PC. Keep an eye on that timer, anyway. It’s set to run out around 8am tomorrow, ET.