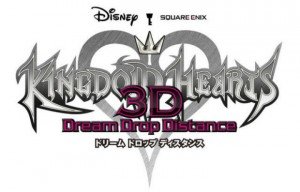 In 2002, Final Fantasy and Disney came together to create arguably one of the finest games in the industry. The Kingdom Hearts franchise definitely has a special place in our hearts with its well thought-out story line, likable 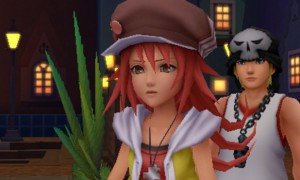 characters, and, let’s not forget, the worlds that are ready for exploration. And where else are you going to find all of your favorite Disney and Final Fantasy characters in one place? Exactly. Kingdom Hearts is a classic, and this next installment in the series only adds more excitement to it.

Now, ten years and numerous Kingdom Hearts games later, Square Enix has just released Kingdom Hearts 3D: Dream Drop Distance for the Nintendo 3DS. For those who have played Kingdom Hearts Re:Coded on the DS, Dream Drop Distance is a continuation of this story line. Regardless, anyone who has played the earlier games in the franchise can pick up this game and (hopefully) be able to follow the story with ease. Fair warning, though: there may be a few parts where confusion will sink in. For those who have never played a Kingdom Hearts game, let’s just say it may not hurt to have some other titles under your belt before picking up this new title.

After their many ups and downs, Sora and Riku are back, as well as many of the talented voice actors who give these beloved characters life. Kingdom Hearts 3D: Dream Drop Distance follows Sora and Riku as they attempt to pass the Mark of Mastery exam, which is given to them by the powerful sorcerer, Yen Sid. The sorcerer is trying to prepare 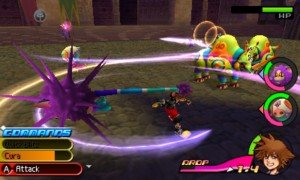 our heroes for the inevitable return and threat of Master Xehanort.

Sora and Riku’s mission, should they choose to accept it (and they do), is to awaken seven different worlds from their state of sleep. Their success will christen them the ultimate keyblade masters, powerful enough to battle Master Xehanort. Their failure? Well, let’s not dwell on that. As part of their trials, Sora and Riku are separated from each other and are sent to the worlds that were previously destroyed by the Heartless and the Nobodies in earlier Kingdom Hearts games. Let the good times start rolling!

In one word, KH3D is fun! Combat is quick, strategy is key, the worlds are beautifully created, and the music is outstanding. During the game, you are able to switch between Sora and Riku once a certain amount of time has passed. This is where the game’s namesake comes in, because switching between these two characters is known as a drop. This concept was well thought-out and actually very effective for the gameplay. Although there are two simultaneous story lines revolving around seven different worlds, for the 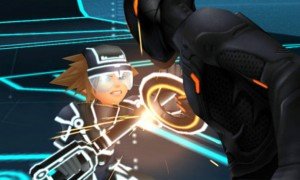 most part, the story runs smoothly.

As the game progresses, so do the flashbacks of the other Kingdom Hearts games. The story line of Dream Drop Distance moves quickly at times, and it is definitely possible to miss something, so be paying attention! Some parts can get complicated fairly quickly, and saying more would be giving too much away.

There is a lot of battling throughout this game, namely against the Dream Eaters, and KH3D keeps with the primary battle strategy that we have seen in the other Kingdom Hearts games, such as using magic and physical attacks against your enemies. Although there are some new, exciting additions to this concept, they require a lot of strategy. In your command deck, for example, there is a limited number of slots for your abilities, so you must choose wisely. Another new and awesome addition to the battle system is flowmotion. Flowmotion allows you to move around your environment at crazy (no, honestly) speeds, and you are able to use your surroundings to avoid enemies, jump off of walls, and execute pretty sweet attacks. 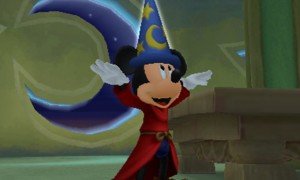 Admittedly, there are moments in Kingdom Hearts 3D: Dream Drop Distance that can incite anger, such as some frustrating battle sequences, getting accustomed to the drop system, and the intricate storyline, but there isn’t anything that should keep you from playing and completing this amazing game. As previously mentioned, KH3D is fun and exciting, and think of it this way: it’s existence is putting us all one step closer to the much anticipated release of Kingdom Hearts III! Dream Drop Distance just hit the stores yesterday, and you definitely don’t want to miss Sora and Riku’s next big adventure.

This review is based on the Nintendo 3DS version of Kingdom Hearts: Dream Drop Distance distributed by Square Enix