It has been 19 years since the world last saw a Killer Instinct game. In that time, its developer Rare, was acquired by Microsoft and has gone on to create many un-Killer-Instinct like games such as Conker: Live & Reloaded, Viva Piñata and Banjo-Kazooie: Nuts & Bolts. Still, gamers clamored for a new KI and their prayers were answered at E3 2013, when Microsoft released the first footage for Killer Instinct, exclusively on Xbox One. With the relatively unknown development team at Double Helix Games taking over responsibilities for the title the question has to be asked – Does Killer Instinct land a “Supreme Victory”?

If you have no experience with Killer Instinct, it’s a famous fighting game franchise that emerged in the arcades in 1994 at what most consider to be the height of the fighting game craze. Seriously, this is when arcades were still prevalent in the United States and you would have your choice between Killer Instinct, Mortal Kombat II and Super Street Fighter II: The New Challengers – Truly the good ol’ days. Where the other fighting games had their own trademark mechanics such as fatalities and super moves, Killer Instinct was known for its rabid combo system that yielded tons of hits and required great reflexes and timing on the part of the player.

At the heart of the new Killer Instinct, that’s still the case. The game wields an easy to approach combo system that will reward you for studying it in detail. As of this writing, a lot of familiar characters are back for this go around including Jago, Sabrewulf, Thunder and Orchid plus new comer Sadira with more characters to come around shortly including Spinal and Fulgore. That may be an odd concept to some, a fighting game releasing with only about 5 characters, but it’s all apart of KI’s free-to-play approach. Of course, “free-to-play” and “fighting game” usually don’t go hand in hand but despite the usual community uproar over anything DLC, surprisingly most don’t seem to mind this approach with characters costing $4.99 individually or in packs for at least $19.99 for all of season one’s characters. 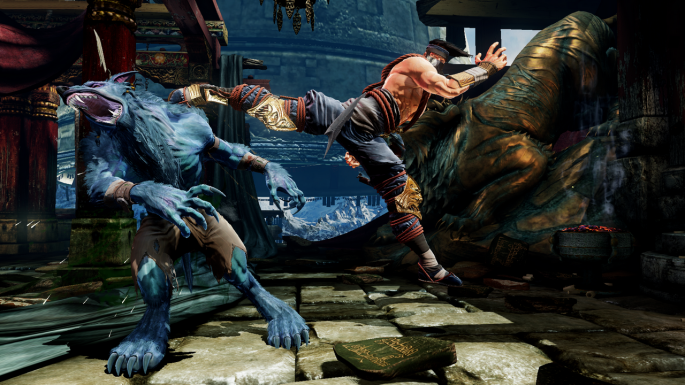 If you have had experience with any of the previous Killer Instinct games, you won’t have much of a problem jumping into this one and getting down-and-dirty with some combos as it follows the usual pattern of special move, button, special move, etc. That’s basically how I looked at a KI combo from my old days of Sabrewulf and Orchid. But the new Killer Instinct does a great job of actually breaking that down into the more technical OPENER, AUTO, LINKER, AUTO, ENDER. If you don’t know what that means that’s fine for the sake of this review but if you spend any time when KI’s fantastic “Dojo” mode, you’ll be educated on exactly what those moves are and how it affects your combos. Further, that same “Dojo” mode also goes a long way to explain some of the other nuances of the system including Combo Breakers, Shadow Moves, Shadow Breakers, Shadow Linkers, Ultras and more.

Really, this is probably my favorite part of the new game as not only goes a long way to explain the new gameplay mechanics of KI, but also of fighting games in general, that have enjoyed a huge resurgence as of late. If you’ve heard some of the words while watching streams such as “meaty”, “hit boxes” and wondered how that played into an actual game – Killer Instinct has you covered. Truly, while most training sections in fighting games only have you do combos and special moves, Killer Instinct not only shows you how to do these moves, but explains to you what these moves actually are, and in what situations you would want to use it; truly top-notch work. Matches themselves are fantastic with lots of users reveling about what seems to be fantastic netcode with most reporting no noticeable lag in online matches.

So there you have it, Killer Instinct stays true to the franchise’s roots but introduces some new mechanics which make it a much deeper experience. Graphically, the game looks fantastic, it is decently balanced and online play is silky smooth. So you may be wondering, why the 8 out of 10 rating? Well even if you’re willing to pony up money right now, you can still only get about five characters so the experience still leaves something to be desired in that regard. But that said, let’s see where we are in another year because Double Helix’s Killer Instinct is off to a KILLER start!

This review is based on a retail copy of the Xbox One version of Killer Instinct developed by Double Helix Games.

Did you like this? Share it:
One Fighting Game to Rule Them All | Killer Instinct Review
Positives
Negatives
8Overall Score
Reader Rating: (0 Votes)
0.0