Dark Vale Games’ first foray into the wild, Forge, is proof positive  that failing your Kickstarter isn’t the end of the road. It’s also proof that Steam’s Project Greenlight needs better oversight. Forge is very much in a beta state, yet the store page makes no mention of such. For other games, this has been a serious public relations nightmare, and even caused games to be removed from the Steam storefront. Forge has a much lower profile and has slid away from scrutiny…until now. 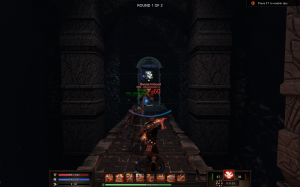 Forge is an MMO battleground-styled arena game. It most resembles a MOBA but lacks many of the tropes and mechanics found in the genre. The real hook, though, is the lack of grinding–or so the store page would have you believe–yet the game has a full-featured levels system. It’s incomplete, but promises unlockable abilities in the future that can replace current ones. Forge is definitely a game of promises…and problems.

The biggest problem with Forge is the controls. Forge uses MMO-style keys with hitscan aiming, which makes movement and ability use difficult. The default key bindings are completely ridiculous. For instance, the ‘b’ key is bound to an ability for just about every class. No human can feasibly reach the ‘b’ key while trying to dodge attacks with ‘wasd'; it’s flat out counter-intuitive. Luckily, keys can be re-bound, but the sheer amount of active abilities is complete overkill. Sometimes less is more, something games like Dota, League of Legends, and Guild Wars 2 do well. Honestly, you’d be better off playing those games anyway.

Forge has five classes in total, each fulfilling a specific role designed around coordinated team play. Balance seems to cater more toward team 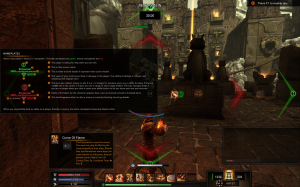 play than one-on-one encounters, but for some strange reason, the Pyromancer is the most well-rounded and has the largest variety of abilities. They win most one-on-one fights with little trouble thanks to their combination of crowd control, defense, and powerful burst damage output. The most-played class so far seems to be Assassin, thanks to their ability to turn invisible indefinitely. Assassins seem to only be good at catching players off on their own though, and sometimes even then they don’t have enough damage to take on solo encounters.

Forge features 3 game modes at the moment, with more promised for the future. There’s your basic Capture the Flag, Team Deathmatch, and Arena modes you’ve likely played before in other games–nothing groundbreaking or innovative. The maps are fairly well-designed but at times feel far too large. The wall jumping mechanics given to all players do make up for this at times, but there is a large amount confusion as to what walls will work and what walls won’t. The vertical nature of the maps lends a heavy advantage to ranged classes. Don’t worry though; the inclusion of stealth mechanics gets plenty of people to play melee classes. 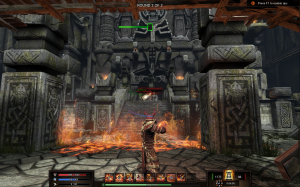 The worst part of the game by far, though, is its lack of basic features. Group functionality and server selection have yet to be implemented–normally a huge issue–but Forge typically has only one game running at a time. The playerbase seems dead on arrival, making it a chore to find games even at peak hours. Couple that with a halfway-implemented leveling feature, and you’ve got one hot mess of a catastrophe. Greenlight is getting a reputation for shovelware, and Forge only reinforces it.

The only real positive is the graphics. They are on par with everything in the MMO-PvP space. A good use of color and distinct silhouettes gives the game superb visual feedback, something even World of Warcraft has had trouble with. Detailed skyboxes and environments add a nice touch of ambiance to the aesthetics.

If you’re dying for MMO-style PvP combat but don’t want a monthly subscription, get Guild Wars 2. Forge will bring you nothing but a nice long wait while the developers try to implement their lofty feature list. There are far too many flaws and not enough positive things in Forge to make it worth buying. It’s unfortunate that this game couldn’t reach its Kickstarter goal, because we might have had a better game if it had.