If you’ve ever wanted to experience the console wars in video game form, you’ll now have that option – well, sort of. In Hyperdimension Neptunia Re;Birth1, a remake of 2010’s PS3 game Hyperdimension Neptunia, you play as Neptune, one of four god-like “CPUs” who rule over the world of “Gameindustri” as they fight the long spanning Console Wars. These four CPUs fight over shares of interest within Gameindustri to win over the people in the realm, and by doing so increase their power.

When the other three CPUs attack Neptune, she falls from the skies and turns into a human, losing all of her memories. She is found by Compa, a healer who joins your party to help Neptune find her memory and get back to the other CPUs.

I’ve actually become quite fond of the story, so far. It can seem childish and irrelevant at times, but it’s in good fun to keep the mood light-hearted. The depth of characters isn’t exactly groundbreaking, to say the least, but it’s hard not to laugh and enjoying the seemingly random conversations between the characters in serious situations. 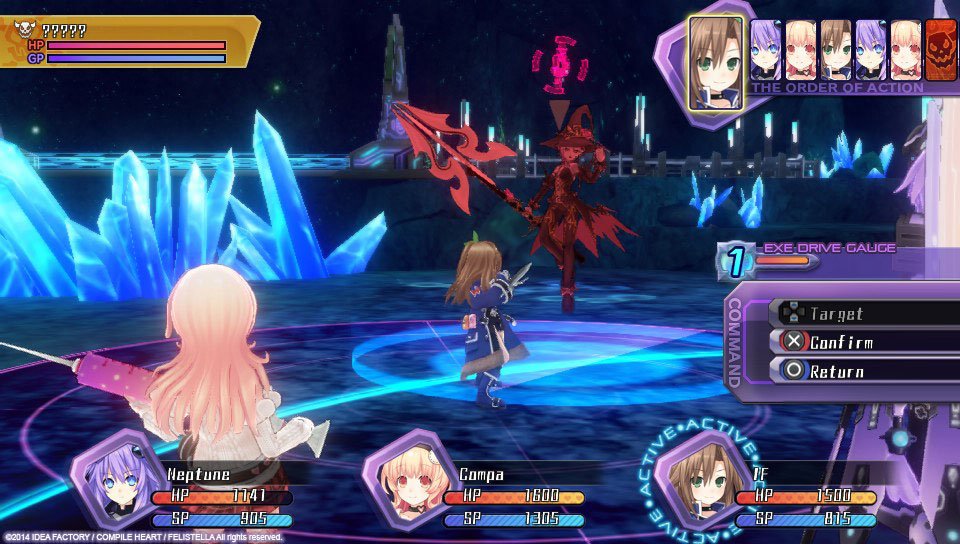 Hyperdimension is unforgiving with the amount of tutorials it throws at you. By the time I was starting to get the hang of one newly introduced aspect of the game, another is thrown in, and it seems like you’re perpetually in catch-up mode from the start. Instead of easing them in or using them in their proposed situations like most tutorials, they’re just presented in a “here you go, figure it out” type of way.

In order to gain shares of Gameindustri, you’ll have to take on missions from each city’s respective guild and turn those in to both take away share from other CPUs, but also to increase your own. These missions range from collecting items found by defeating monsters or collecting them on the ground, to hunting down specific monsters, or even defeating enormous and brutally tough monsters.

Combat is a unique altered version of the basic turn-based affair. Each unit will have their respective turns in order, but you’ll be able to position yourself freely around your enemies or allies. My general strategy is to move my tank and damage units right next to the enemies while keeping my healer far away and out of reach from the enemies. Placement is vital to winning, as you actually have to be in range of your movement circle to attack or interact with any units.

I’ve really enjoyed the fluid combat, and it adds another layer to the generally static turn-based combat. Being able to have your healer stay far back enough to be out of combat is handy, and it’s especially nice to only have to focus on healing your main damage dealers instead of always worrying about the support character.

It does seem like a decent amount of level grinding is necessary to  beat enemies in the way of your progression, as I’ve had to spend a bit of time farming the same enemies continuously to get my characters on par with the more difficult enemies I’ve encountered.  After a while, the basic enemies in your level range can be disposed without much effort, but the harder enemies will still be too much to handle, so it creates this awkward in-between where you don’t earn much experience points from the lower enemies, but you still need to level up to defeat the larger monsters.

Hyperdimension Neptunia Re;Birth1 has me addicted with its fast take of turn-based combat and fun story, and I can’t wait to dig deeper into the game and experience its weird, yet charming universe. My sole hope is that the flood of tutorials start to dissipate so the game can give a little more freedom without interjecting with a new lesson so often.

Make sure to check back for our full review next week on New Gamer Nation, and you can get your hands on Hyperdimension Neptunia Re;Birth1 for PlayStation Vita on Aug 26.

This preview is based on a review copy of the PlayStation Vita game Hyperdimension Neptunia Re;Birth1 by Felistella.