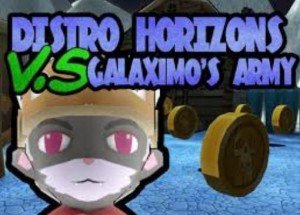 The game is heavily inspired by such timeless classics as, Banjo Kazooie, Super Mario 64, Crash Bandicoot and Conker’s Bad Fur Day. But is said to also offer new, unique and interesting gameplay mechanics that have not yet been seen in the genre.

While there is still little information available for the project, upon a successful Kickstarter campaign the team at Kitatus Studios plan to release the game on PC / Mac / Linux & Ouya.

You can check out a gameplay demo of Distro Horizons VS Galaximo’s Army below, followed by a link to the games Kickstarter page where you can view Kitatus Studios official pitch for the project.