Do androids dream of electric sheep?  It’s an old question, but hardly one that Croteam, most well-known for the mindless first-person mayhem of the Serious Sam series, could have been expected to ask.  Enter The Talos Principle: a stark departure from the developer’s previous efforts and a philosophical puzzler in the vein of Valve’s Portal.  A dark horse that emerged out of the blue in late 2014, The Talos Principle stands as an exciting evolution for its developers and one of the most engaging, rewarding, and unique puzzle games in some time.

From the opening moments of the The Talos Principle, as you brace your robotic arm against the harsh light of sudden sun, it’s clear that something is off in this world you’ve awakened in.  You are immediately greeted by the booming, disembodied voice of Elohim, who claims to be your creator and welcomes you to his garden.  For those recognizing a similarity to a certain millennia-old text, the similarities between the narrative of Talos and the biblical story of creation do not end there.  While Elohim welcomes you to explore the worlds and puzzles he has created for you to master, leading to the promise of everlasting life, he simultaneously issues a foreboding commandment to not scale the mighty tower that exists in the game’s hub area.  To do so would be to doom both yourself and all of your future generations, he claims.  The cursed “serpent,” an unidentified user or AI that speaks through the omnipresent terminals within the game’s levels, however, has different ideas. 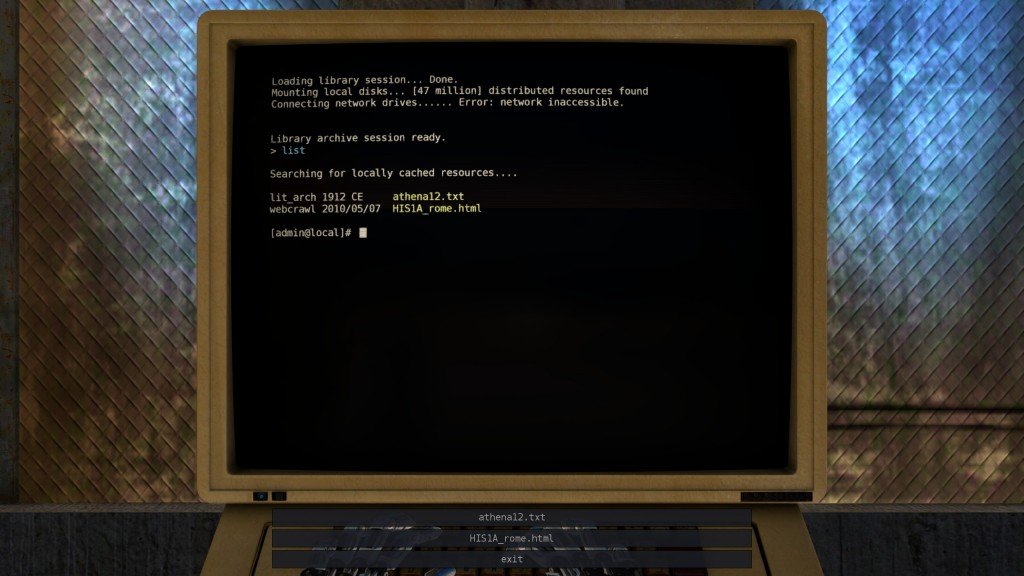 You’ll spend a lot of your time in the game interacting with text files.

The mystery of the world’s nature, the secrets the tower may hide, and questioning what is real proves to be captivating enough intrigue to drive the desire to solve the puzzles that populate the world.  The game slowly drips information to you as a reward for your persistence, methodically clearing away the obfuscation of its own narrative.  Overlaid across this pursuit of truth is a fascinating atmospheric blending of the divine and robotics; throughout the course of your journey through the garden, you will uncover audio logs, peruse archived terminal text, and engage in philosophical conversations with the serpent that ruminate on the nature of consciousness, the human soul, and the theory of the singularity.  Well written and enticing in its brevity, Croteam’s writing is even more impressive in its avoidance of sophomoric musing and repetition of ideas already well-worn by Philip K. Dick and myriad other science fiction authors past.

Unfortunately, the presentation of the game’s script does not always match its overall quality.  Audio logs have become rote as a method of storytelling within games, and their hidden nature within the world contradicts their importance in understanding the overall narrative.  Similarly, the text logs come fast and furious; despite their quality, their method of delivery that interrupts the action of the story and demands user attention appears unimaginative next to the advances in immersive and emergent storytelling that have populated games within recent years.  When juxtaposed with Portal, its predecessor and clear influence which was able to deliver an immensely poignant and memorable story largely through the voiceover of a single character, the narrative delivery feels lacking and unimaginative. 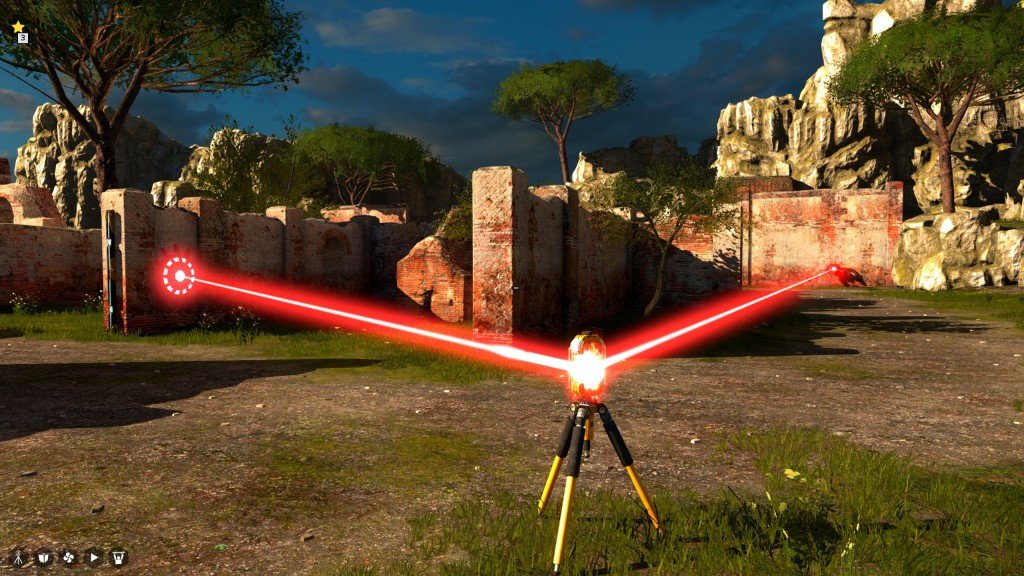 Elohim has a real thing for lasers, as it turns out.

Thankfully, the core gameplay loop of solving puzzle after puzzle remains brain-twistingly delightful enough to keep the player’s attention.  Talos is the rare standout from its genre that manages to simultaneously inspire soul-crushing despair at the difficulty of a puzzle and forehead-slapping elation at finding that puzzle’s solution.  Completing each one of the game’s myriad tests rewards you with a single color-coded tetris piece (ahem, sigil) that acts as part of a key to one of the many doors you will find in the hub world – or the tower, should you dare to venture there.  Though early puzzles mostly involve manipulating “jammers” to temporarily disable force fields and “connectors” to connect laser beams to sockets that serve the same purpose, the game rolls out new mechanics and techniques at a satisfying pace, escalating to a feverish last quarter that involves clones, drones, and enough lasers to give James Bond nightmares.

Most of these puzzles hit the mark, though some clearly feel less polished than others.  I ran into some occasions during my playthrough of the game where the puzzles’ difficulty strongly affected my enjoyment.  In particular, I found the difficulty spike in the latter third of the game to present instances of puzzles where a maddeningly complex series of actions had to be executed in perfect order lest the puzzle be cast into unsolvable territory, requiring yet another reset and a risk of random objects being damaged by controller-throwing frustration. As the difficulty of some of these puzzles can be quite draining, the title definitely lends itself to short play sessions, with a little time away from the keyboard and a fresh mind often being the best solution. 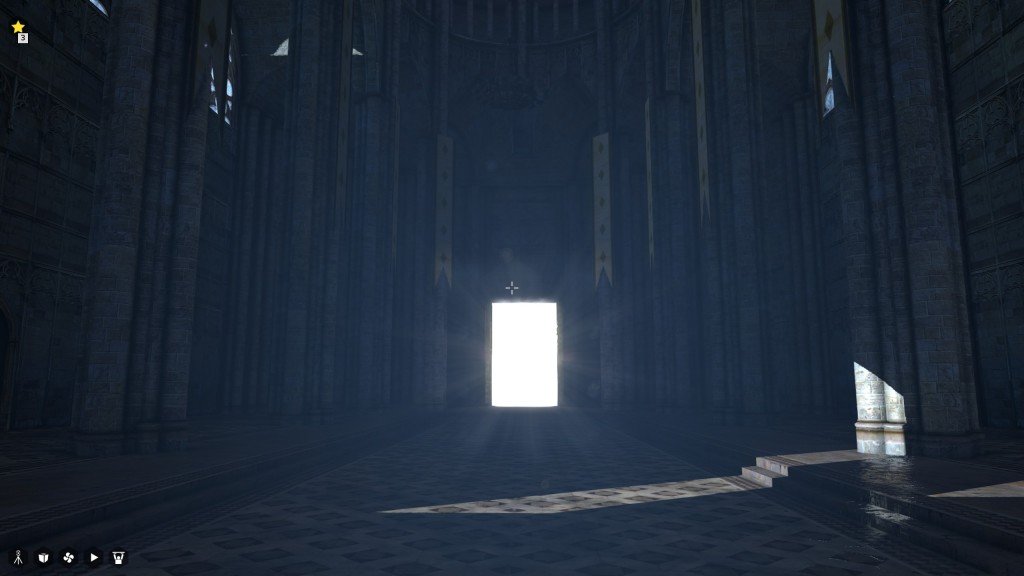 It’s not easy to tell whether obeying Elohim is the “right” choice.

Like Croteam’s previous efforts, the game isn’t much of a technical marvel; muddy textures and bland shaders often lead to the game looking more like a Source Engine mod than a full-price release.  The stellar art direction, which blends Greek, Egyptian, and traditional Christian imagery does a lot to combat the aged engine, and provides enough variety to keep the game feeling fresh through its 10-15 hour runtime.  Also striking is the general lack of sound design, with sparse music and sound effect beds also contributing to the “budget” feel that the game doesn’t quite manage to escape.

Despite the technological and storytelling gripes that can be levelled against Talos, it remains an immensely enjoyable and engrossing experience.  While its length and difficulty can work against it, few games in recent memory have been able to inspire the same feelings of accomplishment that Talos provides when it fires on all cylinders.  The captivating narrative, unique atmosphere, and scope of puzzles offered do enough to justify The Talos Principle’s asking price and make it an easy recommendation for anyone craving an inspired puzzle game to test their wits and challenge their philosophical ideals.

This review is based on a retail copy of The Talos Principle developed by Croteam, published by Devolver Digital

Higher Powers and Towers | The Talos Principle Review
The captivating narrative, unique atmosphere, and scope of puzzles offered do enough to justify The Talos Principle’s asking price and make it an easy recommendation for anyone craving an inspired puzzle game to test their wits and challenge their philosophical ideals.
Overall Score7
Positives
Negatives
2015-02-03
7Overall Score
Reader Rating: (0 Votes)
0.0