Dying Light had a lot of hype before it released, up until the moment that no review copies were sent out. This normally is an early warning sign that something is seriously wrong with the game. Taking that into consideration, and the fact Techland, who are the developers for this title, also created Dead Island, which I didn’t enjoy even a little bit. It was safe to say I had very low expectations heading into Dying Light. I fully admit, I was wrong, and all my expectations were blown away by this absolutely riot of a game.

You play as an agent of the G.R.E, a global organization created to help with the zombie outbreak. You are sent in to collect a file that holds some great importance to the G.R.E. Needless to say, things don’t go so well. Within the first minutes of the game you parachute into a tree, get beat up by some baddies, and then get bit by a zombie. Not the greatest start to your mission, but it sets the story. 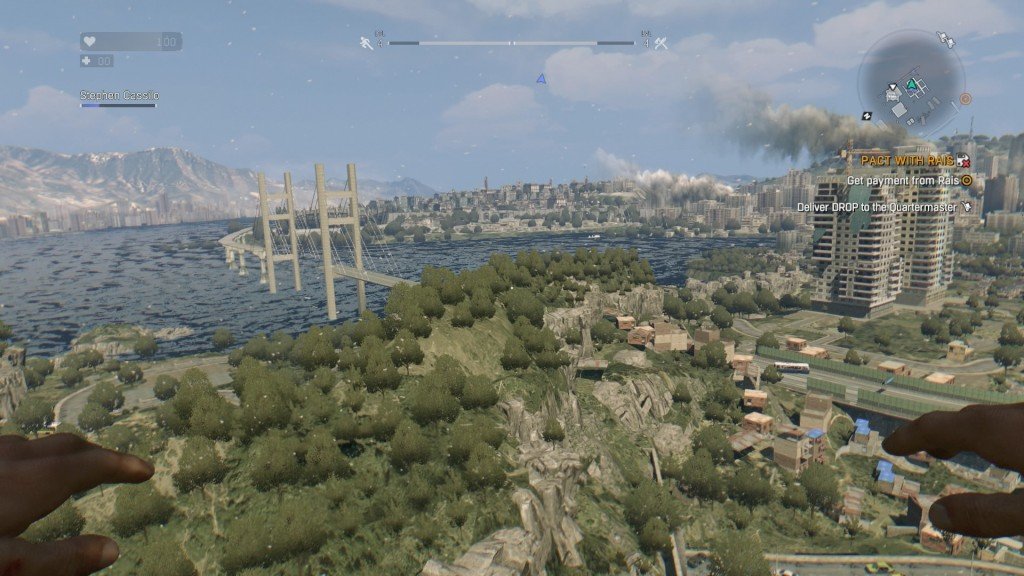 Let me say straight away, don’t get excited by the story. It falls flat on its face time and time again. There was never a moment where I didn’t see a twist coming, and all the characters were so stereotypical it was hard to care for any of them. The villain tries so hard to be that crazy guy who has some revealing take on life. He’s overly dramatic, and makes questionable choices throughout the game. Likewise, all the other characters fall right into place on the puzzle board of typical storylines.

The best way to head into Dying Light is almost like a B-action movie. You aren’t really looking for a complex or original story. You don’t care what the reason is to run into a building full of zombies, you just want it to look cool when you do. I can happily report that Dying Light certainly succeeds on that front.

Dying Light looks beautiful, from character animations to set design. The brutality of smashing a zombie’s head in has never looked so gorgeous. There were times I stood on top of a building and looked over the map, taking it all in. The trees blew in the wind, and the smoke from a burning buildings in the distance blew in the same direction. The air is filled with debris from the destroyed city, and it all paints a wonderfully dark setting in a normally beautiful place. 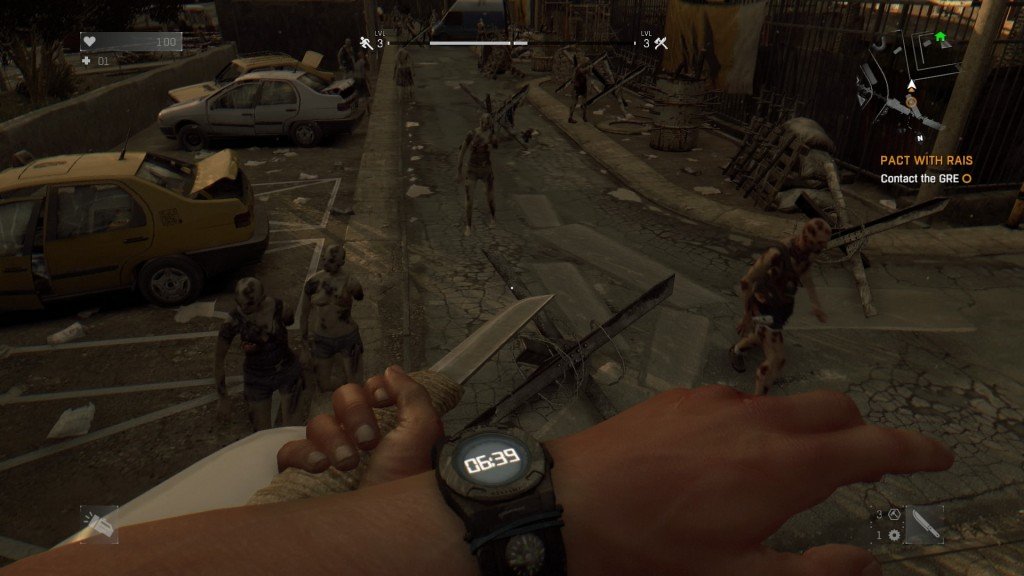 How does one get around such a beautiful area? With free funning of course. The gameplay of Dying Light is best summed up by taking the basic combat from Dead Island, and adding in the mix of Mirrors Edge. A very cool theory, and one that works a majority of the time. There are a few awkward combat and climbing sections, but when everything clicks, Dying Light excels.

For those that never played Dead Island, the combat is basic. You pick up objects that have different strength and durability stats. You smash those objects into a zombies face until either the zombie’s head or your object breaks. You then get a new object and repeat the process over.

That’s the shallowest version, in reality, you have the ability to craft weapons to increase the stats. You can get pretty creative, and even some elements like fire and electricity come into play. Finding a new weapon and comparing it to your old ones is as fun as finding new loot in an MMO. You are constantly on the lookout for a new weapon that will give you a slight advantage. Getting a wide variety of weapons is key, and like always, you’ll find yourself strangely attached to some weapon and you’ll be sad to discard it for something else. 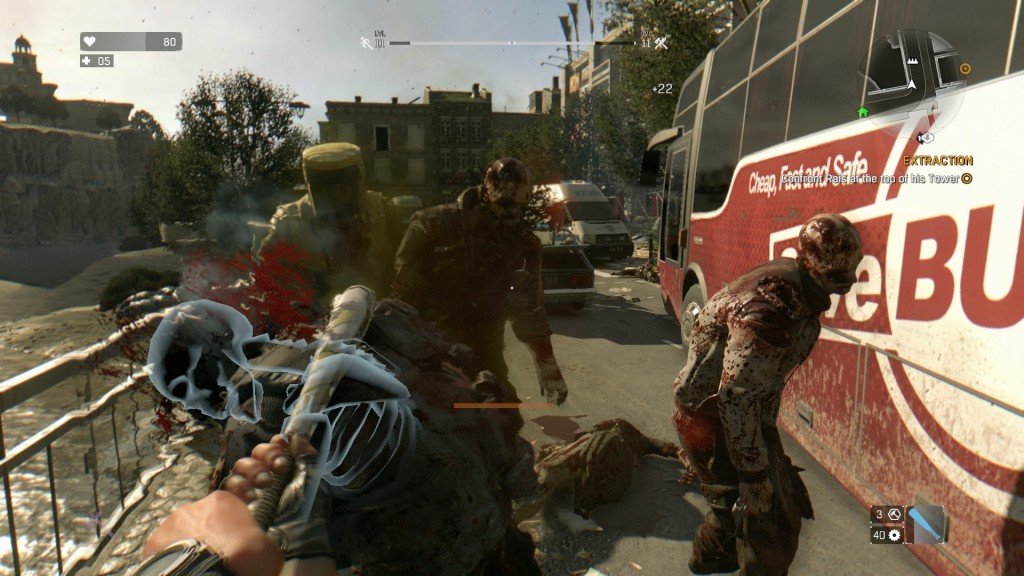 There are also three skill trees you earn experience for: Power, Survival, and Agility. Power is increased with every swing you take and zombie you kill. It gives you more attack skills like being able to dropkick a zombie or swing your weapon like a hurricane. Survival has stats like gaining more health, looting zombies faster, lowering store prices, and other things of that nature. Agility, is all about the parkour. You can climb faster, vault zombies, slide across the ground, and more things along those lines.

The Agility stats are really necessary to make traversing the terrain as easy as possible. At first you will struggle with the movement as you get use to the controls and your person gets winded easily. When your character gets tired, he slows down a little and he can’t turn as sharply. It’s a neat touch instead of simply stopping in your tracks and being forced to walk.

I struggled with the parkour in the beginning, but as I kept playing, I grew accustomed to the controls and really made the city my playground. Once you master the traversal, the world really opens up. You’ll be jumping off buildings, hopping through windows, sliding under fences, and sprinting across wires four stories off the ground. The movement works well and keeps the intensity up when you’re being chased. 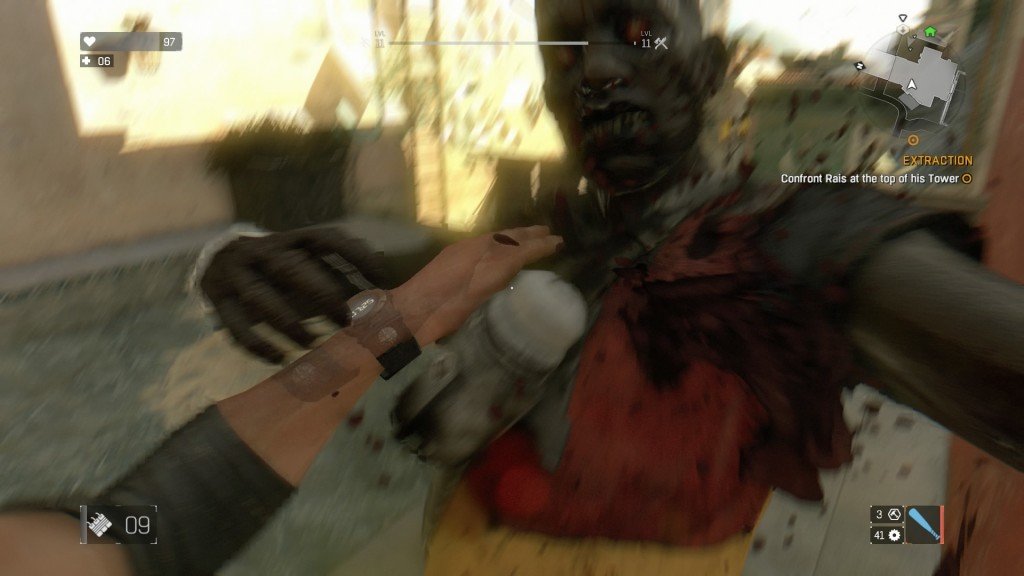 The only time it falters is when everything slows down. Climbing up one building can be more difficult than it should be, and often times he doesn’t grab the ledge like he should. It can make for some awkward and frustrating moments.

Dying Light’s strongest feature – as it should be – is killing hordes of zombies. Smashing zombies to pieces, dropkicking them off buildings, setting them on fire, cutting them in half, exploding them with cars, and any other mayhem you can do is an absolute blast. The zombies don’t pose much of a threat when there’s only one or two of them. Naturally, a horde isn’t something you should mess with, but the cumbersome zombies aren’t hard to get away from. You can even run through a group without taking any damage if you do it right. 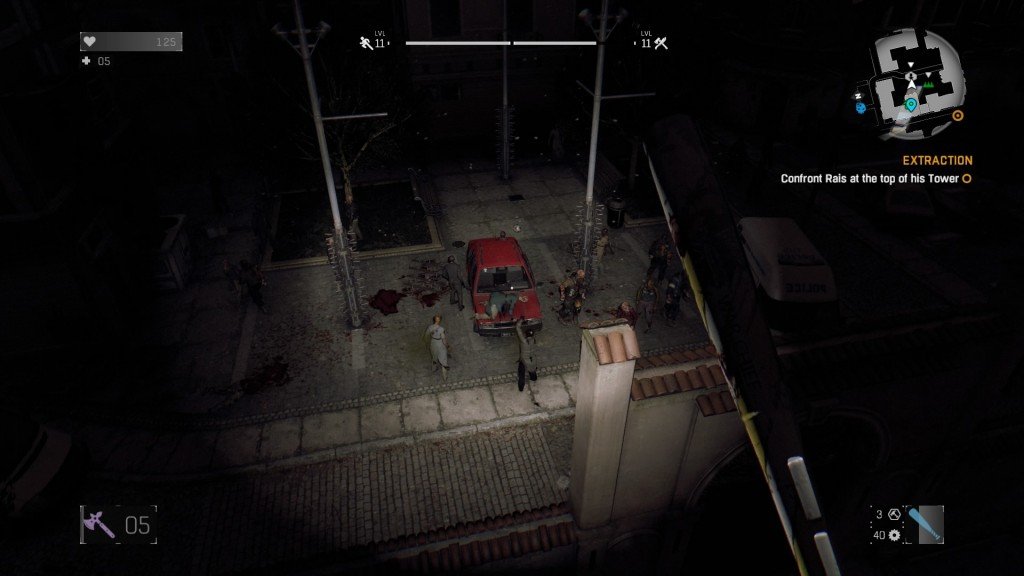 The fact they can see your flashlight adds a whole new level of terror. When you shut your light off, it is dark, and you will struggle to see. That’s the point. There were numerous times I found myself hiding in a corner as I was surrounded by these powerful zombies. I could feel my heart beating as I hoped they wouldn’t turn and see me.

If one does see you, the race is on. You take off sprinting as fast as you can, cutting corners, jumping off buildings, all at night with extremely low visibility. The more you run, the more zombies see you and give chase. Luckily, you can lose them so they don’t chase you automatically forever. The intensity of night adds such a drastic difference from the day, you almost feel like you’re playing an entirely new game.

You can sleep at night to avoid all the scariness, and that is a very viable option. However, there is a risk/reward system in place. When the sun goes down, everything you do gives you double exp. It’s a little more tempting to stay out at night now, isn’t it? When you want some extra experience you may brave the darkness and try to get that extra edge. 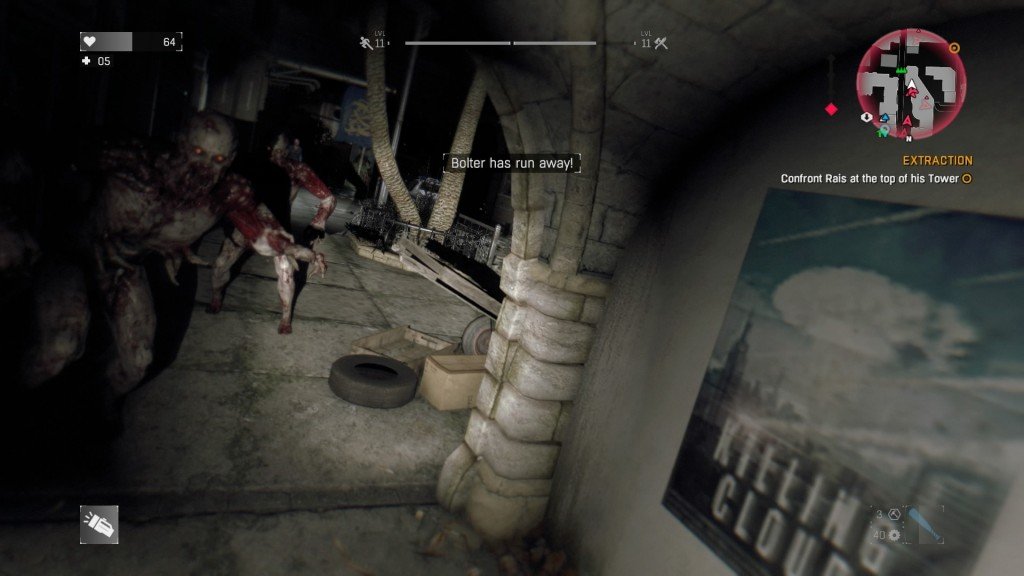 Truthfully, a majority of the time I played at night was due to me pressing my luck a little bit too much. I wanted to do one more missions, search one last building, or explore one more area. I always pushed it too far. My watch would beep and next thing I knew I was surrounded by deadly zombies in the darkness. It isn’t frustrating or annoying to be stuck at night. It’s flat out exhilarating.

Fighting zombies and surviving the night is plenty of fun, but the game really falters whenever other humans get involved. There are various moments when you will come into contact with other people. Unlike the fun and chaotic combat with zombies, fighting humans is often boring and dull. When it’s fighting with melee weapons all you do is take a swing, hop back, dodge their swing, then you swing, and on and on. It’s not fast paced or intense. It’s slow as you chip away at their health between their blocks. Fighting humans never was fun for a second for me. There are these awkward standoffs, that are supposed to feel intense, but when no one moves for fifteen seconds it just looks silly.

This remains true even when guns get involved. Guns against zombies are fun, and dangerous because it will alert more powerful zombies to your area. There are times when you get in firefights with humans, and the gameplay slows once again. The shooting mechanics are passable. They aren’t too frustrating, but they are nothing to write home about. The shooting sections grew tiresome all too quickly, but luckily there aren’t many of them in Dying Light. 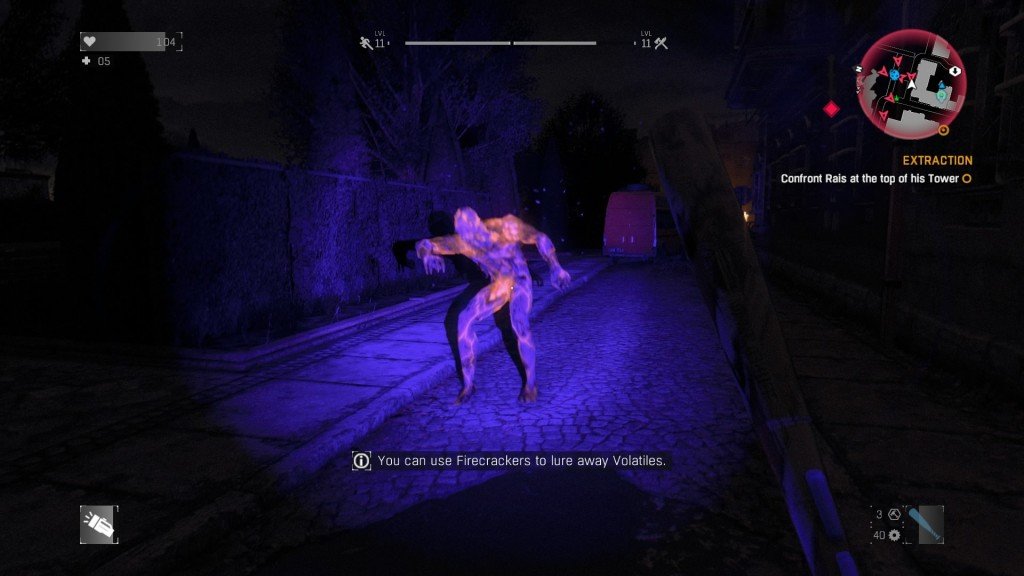 What adds to this already fun game is the ability to do four person co-op. Yes, you can even do the story missions and side quests. Best of all, the experience and completion of those quests will carry over to your game. Dying Light really shines when other people join your game. Those zombie hordes you had to avoid are suddenly a competition to see who can kill the most. Literally, the game will prompt you with a challenge. If everyone accepts the challenge, the game begins and whoever kills the most zombies is rewarded with extra experience. It’s a really nice touch to add intensity into even dull moments. Running to a new objective 500 meters away is boring, unless you make it a race and the winner gets bonus exp. It’s a small touch that adds a lot of depth to the game. 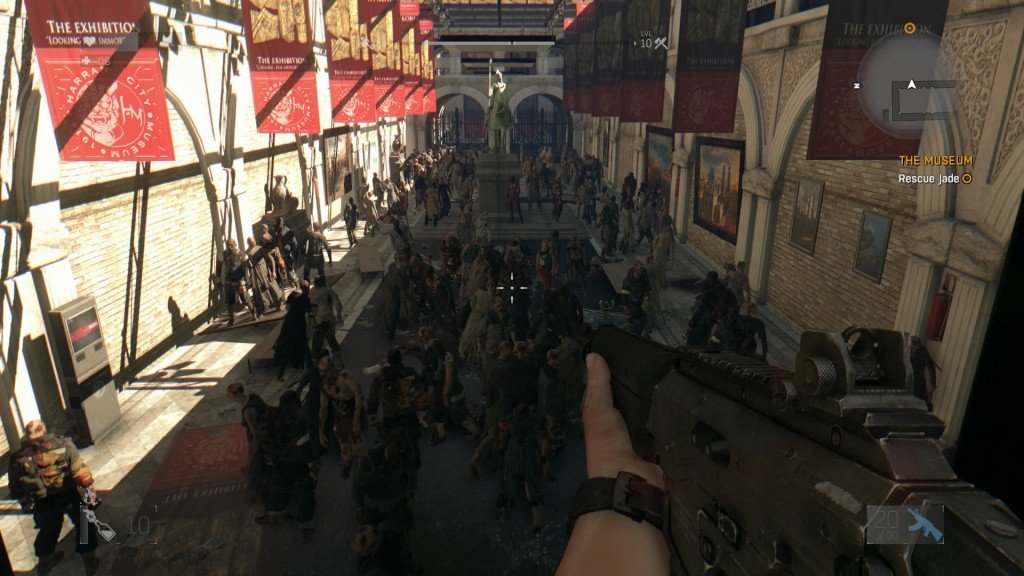 Dying Light really is a playground. You can whack zombies, sleep at night, and run on the ground, but you’ll be missing a lot of the fun. My friends and I led a group of zombies to a spike wall and took turns dropkicking them into the spikes. We then tried a form of zombie bowling. Dropkick a zombie into the horde and see how many you can knock over. There are hazmat-suit zombies that explode with the tank of oxygen on their back. It’s useful for taking out groups of zombies, or aiming it at your friends to try and kill each other. Dying Light can be as boring and dry as you want it, or as fun as you can make it.

Like I said in the intro, I had extremely low expectations for this title. Real low. I was not only a little impressed, but I have been playing Dying Light nonstop. The story is a drag and not even worth paying attention to. The missions are glorified fetch quests essentially, and the gameplay can feel a little repetitive. However, Dying Light is a playground and it is packed full of fun things to do. The traversal is incredible, the brutality fun to behold, and the unexpected chaotic intensity makes up for any faults it has. Dying Light is a wonderful zombie game, so if you’re looking to split a few heads, grab your hammer and get cracking.

This review is based off a retail copy of the Playstation 4 version of Dying Light developed by Techland and distributed by Warner Bros. Interactive Entertainment.