Space Chicks is an iOS game that comes to us from Crescent Moon Games. It mixes fun gravity infused gameplay with a traditional endless runner. It also features great mission progression, and loads of personality. All of it comes together to make Space Chicks an incredibly addicting offering for the iPhone. 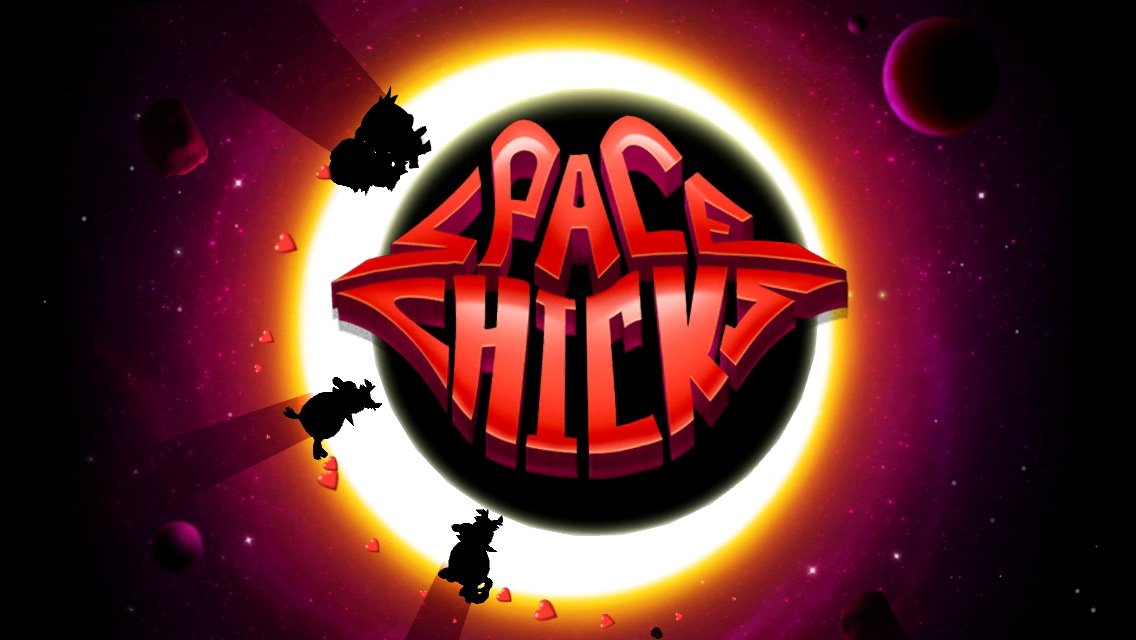 There is no story in Space Chicks. All you need to know is that chicks need saving. You start as a little blue haired astronaut. You jump from planet to planet collecting coins and avoiding space pirates. When you come across a chick that needs saving, you jump on the planet she is located on, and run next to her. She will then jump on your back. It is your job to bring her to her ship, so she can fly away to safety. If you are hit by anything while you are carrying her, she will fall off, and you will be thrown from each other. Saving chicks is always a fun challenge and is often tied to the missions. It is also one of the most unique aspects of the game.

The missions in Space Chicks include a wide variety of challenges. The challenges have you doing things like saving 5 brunettes, collecting 500 coins in one run, and retrieving the letters RAMBO (Tony Hawk style), to name a few. As you progress, the missions get much harder at a good pace. So, maybe you’ll start out just having to save 5 chicks in one run. Then, as you progress in rank, you’ll find yourself having to save 5 blondes and 5 brunettes in one run. After every 4 challenges you complete, you rank up, giving you a new set of 4 challenges to complete. This is similar to many other games in the endless runner genre. The mission structure in Space Chicks doesn’t break any new ground, but it is executed perfectly, to keep you coming back and challenged throughout each run. 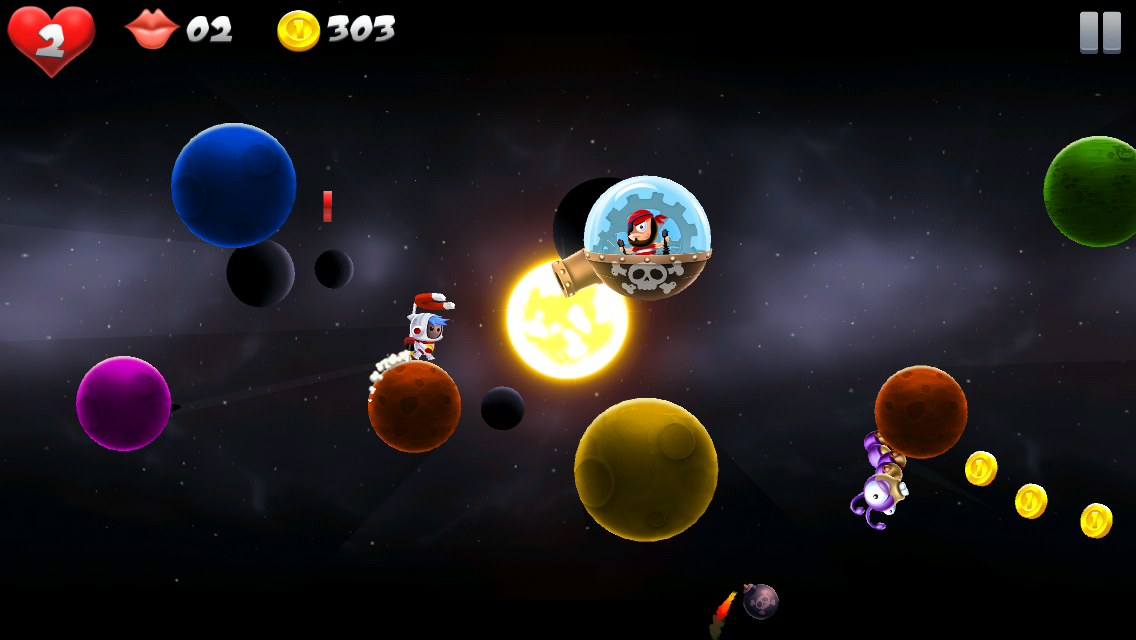 The gameplay in Space Chicks is incredibly fun and addicting. It is the standout of the experience and the reason to check out this game. As you jump from one planet to the next by tapping the screen, you are thrown in different directions based on the gravitational pull of each planet. You control the length and speed of your jump by holding your finger on the screen. While you’re thrusting yourself from planet to planet at the mercy of gravitational pulls, danger is ever-present, as space pirates are everywhere. They have many plans of attack, which include: chasing you down on foot, throwing bombs, and shooting you with missiles that explode on contact. The pirates keep the pace of the game up. Every encounter with pirates can be a deadly one, so it’s best to always stay on your toes. You’ll also encounter space caterpillars and green slimes. Both add more danger, and will have you cursing the heavens as you run out of hits.

At the end of each planet jumping section, you jump into your ship. This is where the game shifts into more of a traditional endless runner, like Jetpack Joyride, a game where you progress left to right at an unstoppable pace, and you tap or hold the screen to move up and down. This is where you have the opportunity to gain extra hearts and mad coins. I liked how this breaks up the pace of the game. It gives you time to regroup your thoughts. However, sometimes space pirates will follow you in their ship. When they first start going after you they can’t kill you, but they try to knock you off your game. They do this by bumping into you so you can’t get the hearts and coins you so desperately want. As you progress further in each run, they will send pirates after you that can shoot rockets. Those pesky bastards can be tricky to avoid, and can do real damage to your health. 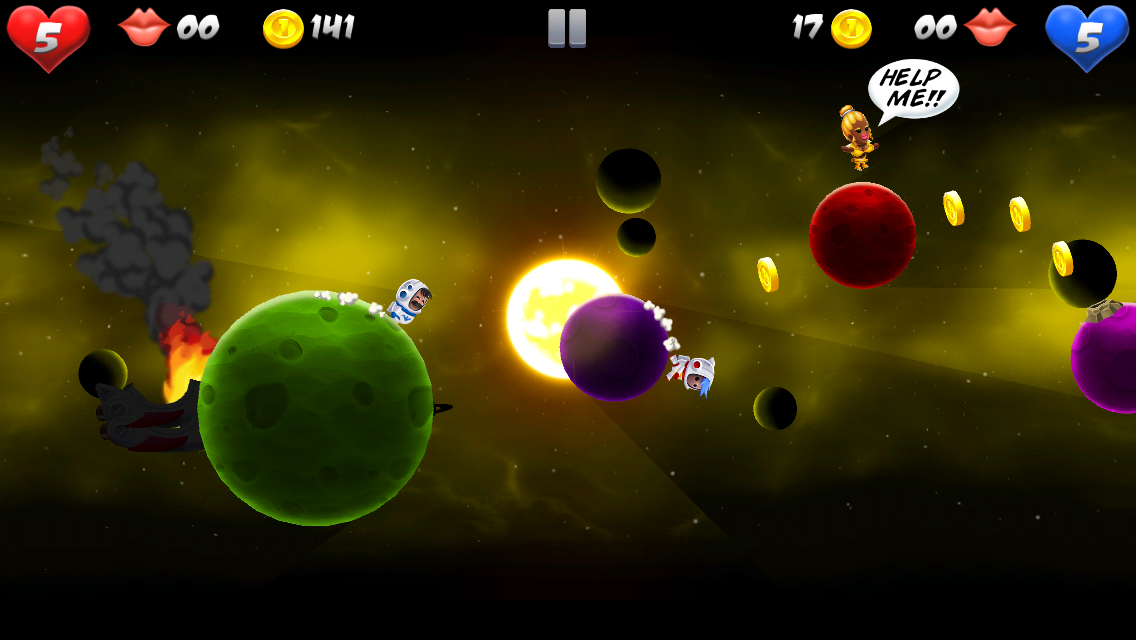 Space Chicks can also be played in co-op with a friend.

Space Chicks looks beautiful and runs smoothly on the iPhone. Each character, enemy type, and environment pops off the screen in gorgeous detail. I was impressed by the level of detail they were able to pull of in this game. All the animations run smoothly, and I encountered no problems with slowdown while I played. Anyone skeptical of the iPhone’s ability to produce a good-looking game needs to look no further than Space Chicks.

With the coins you procure in-game, you can buy many things through the store, which is called the lab. In the lab you can get: airdrops, which are helpful power-ups that will drop down from the sky (coin magnet, chick hammer), upgrades, that include permanent abilities to enhance your character (3 extra lives, double jump), ships (UFO, Russian ship), and costumes (vintage suit, Chuck Norris, Steven Seagal). All of these enhance the experience by giving you something to work towards. They also infuse the game with personality and a sense of humor. Everyone wants to play as Steven Seagal, right? This sense of humor and fun oozes out of every aspect of the game. The music is catchy, and the character designs are cute. Space Chicks doesn’t take itself too seriously and it’s refreshing.

Space Chicks is a game I can easily recommend to anyone looking for a new iPhone game to kill some time with. It’s a fun, tight experience, not to be missed. Now get out there and save some chicks, man.