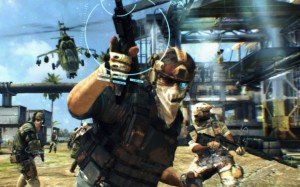 For some reason, many of today’s first person shooters (Medal of Honor, Battlefield, Call of Duty, etc.) feel the need to sell themselves as being realistic, despite the fact that they aren’t. Recently, I received an email from EA informing me that the Medal of Honor: Warfighter Beta was now open on Xbox Live. Within their email, they called the game, “The most realistic shooter of the year.” Unfortunately, within moments of beginning my first online match, I decided to throw a grenade and found out it isn’t very realistic. For some reason, the virtual soldiers of MoH can throw grenades further than MLB outfielders can throw a baseball. You can throw grenades further in this game than you can in Borderlands 2, a game that prides itself on sacrificing realism for fun gameplay mechanics (i.e. no fall damage, no stamina, etc.).

Besides the fact that the publishers and developers are only kidding themselves by attempting to sell this realism, military shooters inherently have a very low ceiling when it comes to realism. Gamers want guns to look and sound like they do in real life. Sales show that many love hollywood explosions and excessive amounts of blood and there is little realism about that. They would, however, also appreciate it if it took fewer than 50 rounds to kill someone and that a lone sniper shot to the foot wouldn’t net a kill. However, would anyone want to play a military FPS that was truly realistic?

Unlike video games, real soldiers are not involved in shootouts at all times; not everything they do is exciting, though it is necessary. There are plenty of tasks that are not particularly glorified that I don’t think gamers would actually want to experience including something simple like sitting through a debriefing or something more treacherous like checking for land mines.

While MoH and CoD don’t let players sprint forever, because humans do have stamina, has your character ever needed to eat, sleep, or use the restroom in the middle of a match? I don’t think so. I do believe that games of this genre should strive to have some sort of realism and it doesn’t look good when the guns on your games cover are not authentic (which apparently happened to the first Black Ops), but I think that oftentimes, the effort being directed toward making a more “realistic” game could instead be used to make a more polished game.

Of course, if CoD continues to put up astronomical sales numbers, then EA will continue to send MoH and Battlefield after it and nothing will change.