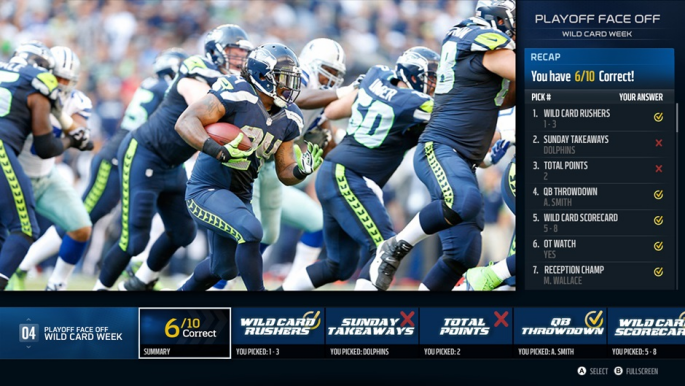 Microsoft isn’t kidding about wanting to make sports more interactive on the new Xbox One. They have just announced that starting on Tuesday, users will be able to use the NFL on Xbox One app to make predictions on the next round of NFL games for prizes including Super Bowl tickets and games. From Microsoft:

Playing the Xbox One Playoff Face Off is easy. Starting each Tuesday before every round of live games (including the Playoffs, the Pro Bowl and the Super Bowl), players can go to the NFL on Xbox One app to answer up to 10 questions that predict upcoming performances. The results will give players achievements and bragging rights among friends. Chances to win prizes are based on participation. The more questions you answer, the more entries that will be automatically generated for the weekly prizes and a grand prize.

Having something like this so relatively soon after the Xbox One’s release is certainly a good sign of things to come. Let’s just hope this isn’t regulated to only the NFL!