Full disclaimer: I know next to nothing about the Dynasty Warrior series. Sure, I’ve heard tales of the generous helping of historical characters, the stunning special moves, and the hordes of nameless Chinese soldiers that so bravely give their lives in a standard battle of any Dynasty Warriors game. That being said, I still haven’t managed to try out any of the series up until this point. Dynasty Warriors 8: Empires serves as my introduction to the popular series, and it’s a pretty decent welcoming party.

The main draw of Empires is the aptly named Empire Mode. The idea of this feature simple: choose a character, either join an existing territory or raise your banners to make your own, and battle your way to a united China. Along the way you can form alliances with other territories, wine and dine other officers to sway them to your cause, and treat your territory’s citizen with either compassion or with a complete lack of human affection. A simple good or evil tool shows you what your people think of how you rule. Quests and raid are also available during the Empire campaign to help level up your chosen character, though the offerings can become stale fairly quickly. 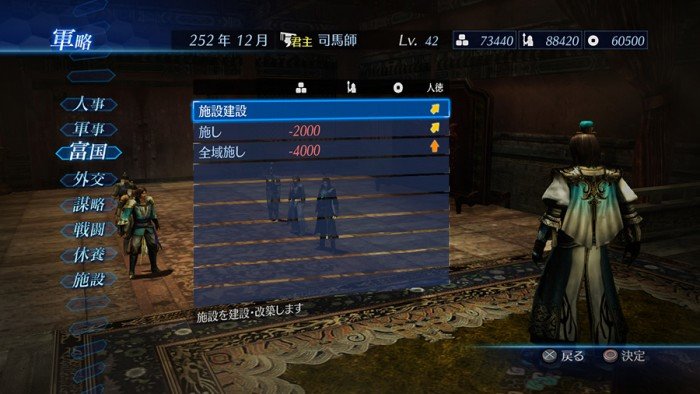 Empire Mode not only gives you the power to build your kingdom from the ground up, it also gives you a few domestic options, like marrying and having a child. Though marrying has no real consequence to gameplay that I could find, once your child is old enough he or she will join your officers. It’s a nice touch that I like to see in historical sims.

DW 8: E also offers Edit Mode, which allows the user to customize their own character, horse, and soldiers. The amount of choice and freedom given to the player add a nice level of absurdity to the proceedings of the rest of the game. Imagine yourself, a stout warrior with pink hair, an eye patch, and a cat perched on top of your head, riding into battle on your black haired demon horse and swinging at soldiers with a garden rake. History doesn’t seem so bland now, eh? Empire and Edit modes are where Dynasty Warriors 8: Empires is the most fun.

Sadly, it doesn’t seem like the imagination spreads to the rest of the game. While character design and animations look great, the graphics of DW 8: E look like they could have been ripped straight from a last-gen title. Environments are flat and uninspiring, appearing like they could have easily been named “Mountainous Area #1” or “A Bunch of Grey Rocks.” 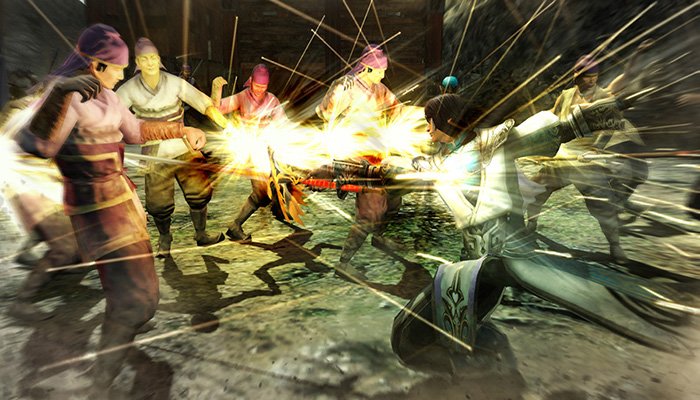 Gameplay and combat don’t fare much better. After my fifth invasion, I was already tiring of pressing X and Y, stringing together the same combos to slaughter thousands of enemies. Occasionally, an officer from the opposing army appears to do battle, but they are only distinguished by their longer health bar and stronger attacks. On normal difficulty, I very rarely found myself faced with any real challenge. After a while, I found myself relishing the moments when my character wasn’t on the battlefield, instead focusing on the calmer moments of running an empire. The quests and raids are similar as well, adding little change to the hack-and-slash formula.

Despite my complaints with combat and the graphical presentation, I did still enjoy most moments of Dynasty Warriors 8: Empires. My first experience with the series was a good one and I look forward to future entries in the series, provided the formula is shaken up a bit.

This review was based on a review copy of the Xbox One version of Dynasty Warriors 8: Empires developed by Omega Force and published by Tecmo Koei.