Confused and frustrated I sat staring blankly at my television. Grim Fandango Remastered flickered on the screen while a beautiful orchestral soundtrack blared through the speakers. I finally subdued to “Grims’” ancient game design and consulted the Internet for guidance. Grim Fandango pulls no punches and is every bit as hard as you remember. New players, like myself, may not be accustomed to the silliness of adventure games and sadly it doesn’t hold up to today’s standards.

Grim Fandango planted itself firmly in the heyday of adventure games in 1998. Fast-forward seventeen years and the game remains the same at its core. Boasting one of the most interesting settings in video games players control Manny Calavera. Calavera is a washed up travel agent who spends his time in the eighth underworld trying to sell travel packages to the recently deceased. Manny tired of getting all the bad clients decides to steal one from his nemesis in order to keep his job. This quickly tails spins into a four-year adventure where Manny meets many different and unique characters. One of my favorites was Glottis, an oversized demon who loves to go fast. Glottis often had some of the best lines and puzzles designed around him. 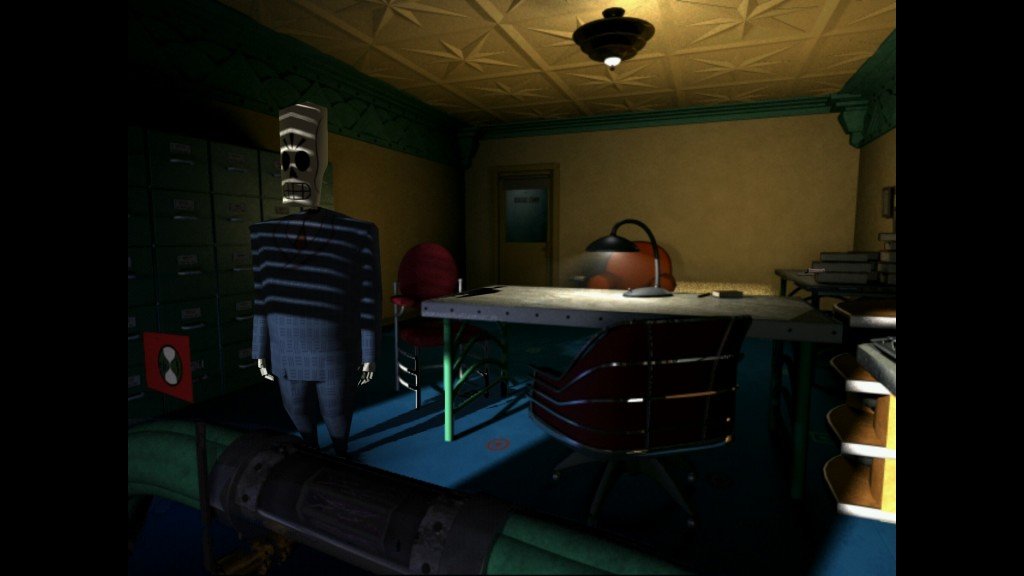 With a noir style, the land of the dead is realized in a fantastic way. Bright colors mix with dark lighting to create the perfect atmosphere for Manny’s travels. Lighting is now much more a factor due to the new remastered 3-D models in the game. With the push of a button players are able to switch back and forth from the original harsher looking models to more rounded less jaggy ones present for the first time. This was a nice option as I often switched just to see certain areas with the original graphics. Sadly the pre-rendered backgrounds remain unchanged. Seeing a slick new 3-D model against the old single angled pictures is a little jarring, but I found that both options look good. Sadly there is no true option for a 16:9 aspect ratio. The option is there, but it’s just a stretched out version that makes the game show its true age. I immediately returned to the 4:3 ratio and it didn’t bother me at all.

One great addition to the remastered version is the ability to turn on developer commentary. I highly recommend turning it on from the start, due to its ease of use and lack of spoilers. A prompt will pop up in the corner of the screen and players can choose whether or not to hear the commentary. Commentary is often humorous thanks to Tim Schafer and company who seemed to have a blast recording it. It also gives a bit of what went in to make “Grim”. They get into how certain aspects of the game work and what they did to make it all run correctly. It’s fascinating and sheds some light on a very polarizing game. 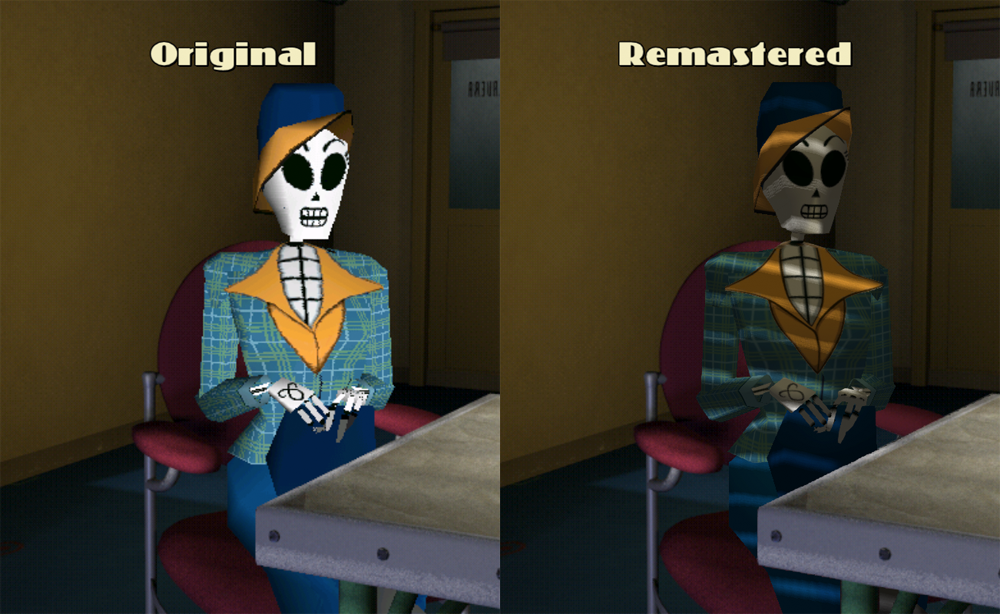 Don’t expect a dark and mysterious tale in Grim Fandango, as there is plenty of humor and lighthearted jokes to go around. Players can often get great lines of dialogue from nearly every NPC if they dig around. The story is also a bit flat, as I wasn’t truly invested in Manny’s true motive. It was more about the characters and the wonder of “what comes next” that strung me along. Each year takes place in a different area of the eighth underworld and while nothing quite matches year two’s setting and puzzles it creates an intriguing journey. The sound is also done very well. Voice acting is crisp and the delivery on each line defines the characters. Manny has a dry and often sarcastic tone, while some characters come off as evil right from the start. This is all portrayed through the great writing and performance from the voice actors.

With it’s superb setting and lively character Grim Fandango had me excited to experience what many consider an all time classic for the first time. However the gameplay and controls made my twelve-hour journey feel like a four-year journey to ninth underworld. Puzzles had me laughing at the sheer absurdity and which they had to be completed. Puzzle may seem like they make sense in hindsight, but during it’s a complicated mess. Items used for puzzles are often nowhere near their intended use and give no real implication where they should work. Pieces of different puzzles can also be completed in any order. This made it more confusing to remember what task had been completed and if that was just to complete another puzzle. I also ran into a bug that stopped me cold in my tracks. I happened to trigger once part of a puzzle early on in a section. When I came back to the rest of it the game wouldn’t receive any inputs and forced me to lose progress. It took me a while to figure out what I had done. I had to “undo” that part of the puzzle before I could complete it, only this time in the right order. Too many puzzles forced the player to line up just right with a specific object in order to interact with it. Many times I was stumped because I thought I was doing something wrong, but it turns out I just wasn’t standing in the right spot. 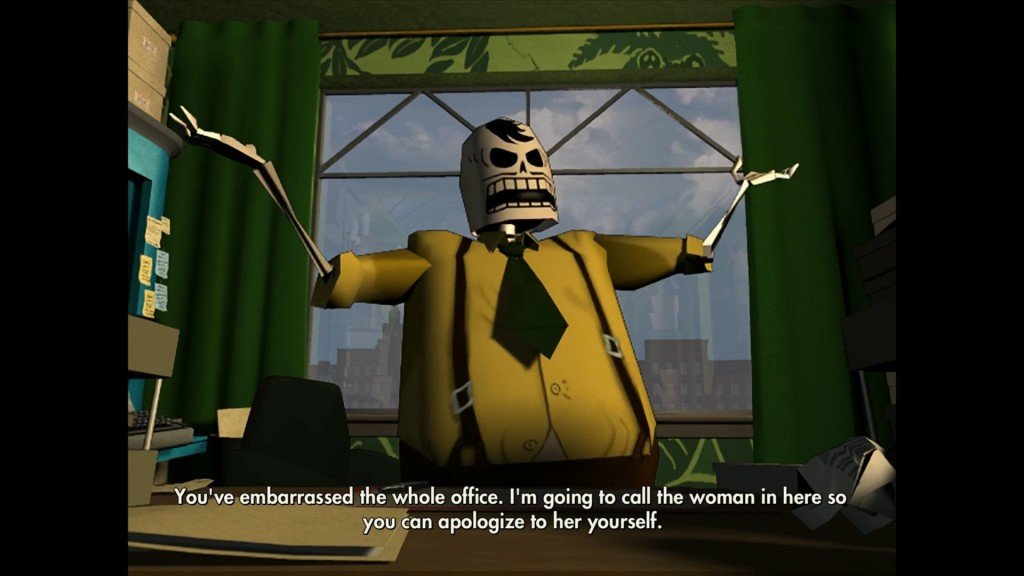 The controls don’t often it making the game feel less clunky. There are two options for controls. The original tank controls and the new updated which lets you move in relation to the camera. Seeing a cut scene of an elevator go up and then getting sucked back into another one going down was infuriating and happened too frequently.

Grim Fandango Remastered takes a game from a “dead” genre and brings it back to life. However it shows its age and makes me wonder if it should have been brought back at all. On one hand I’m happy to have played this classic title, but its frustrations nearly killed any excitement for I had for it. Clunky game mechanics weren’t changed for this remaster and that’s a shame because I believe there is a great game here. It’s just so mixed up in obscure puzzle solving and frustrating mechanics that I’m not sure if it’s worth getting dirty for.