Starting from January 31st next year, Sony will no longer be publishing Pirates of the Burning Sea, an MMO based on colonial struggles in the Caribbean of the 1720s.

The game isn’t disappearing, though; instead, it’s being developed by Portalus Games, a studio formed out of former Flying Lab Software employees who had initially released PotBS. In the official press release, Portalus said “the game will remain free-to-play, and the transition should be seamless.” In the comments section, an employee also stated that they “are currently planning to relaunch the game on February 1st, with as little interruption as possible for our existing players.” Both of the MMO’s servers—Roberts and Antigua—will remain online during this time. If players do want to transfer their existing characters to the relaunched version, they will need to by January 31st. 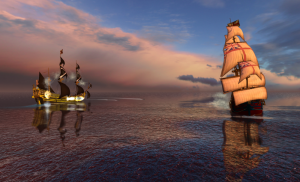 The cannonfire will cease, but only temporarily.

The press release goes on to say “the game’s upcoming departure from the SOE catalog has presented us with an opportunity to build on the PotBS legacy and to create amazing online experiences, which is something that we could not pass up.” Portalus seems to have big plans for the MMO, and fans have a lot to look forward to.

What are your thoughts? What would you like to see from Pirates of the Burning Sea in the future?