There will be death in Hotline Miami 2: Wrong Number. Whether it’s your blood that’s being spilled or those who are unfortunate enough to get in the way. Death comes quick to those who are not fast enough or hesitate. This can be frustrating and may turn off those who don’t like a good challenge, but thankfully there is little time wasted in-between allowing for players to jump right back into the killing spree. This is what makes the Hotline Miami series so addictive. Coupled with great gameplay and one of the best original soundtracks, Hotline Miami 2: Wrong Number is a great sequel that has a few hitches along the way. 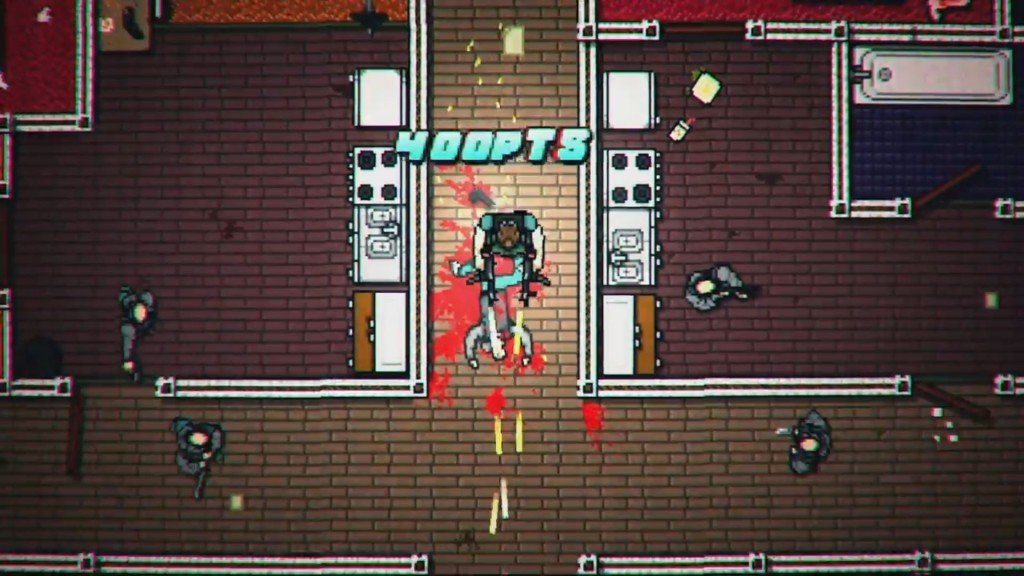 The original Hotline Miami had a odd twisted narrative that made the players dig deep into the text and subtle story telling to decipher what was really going on. Hotline Miami 2: Wrong Number changes that by having a bigger emphasis on story and the characters. The Fans, a group of copycat killers, are all distinguished from each other and each of their personalities is fleshed out just enough to make us wonder. While the fans are the most diverse group the other playable characters are all lead by personal motivations and have an interesting tale that unravels in a slow twisted way.

The characters taking front and center is interesting and provides a motive behind all the murder. Players are either given a character or a small selection of variations. Each of these characters has small differences in starting weapons and abilities. One character even goes against the grain, choosing to be as non-lethal as possible. It’s and interesting approach that defines each character as their own, yet they all seem very similar. This comes at a cost of the freedom and choice behind each level. No longer are you given a choice between dozens of masks. All the variations of the characters are very similar in terms of gameplay and do not add anything extra. Each style is focused on one gimmick, such as dodge rolling or controlling two characters at once. It’s a bit of a let down because it feels like they took away all the little toys and replaced them with a lot fewer toys that are bigger and shinier. 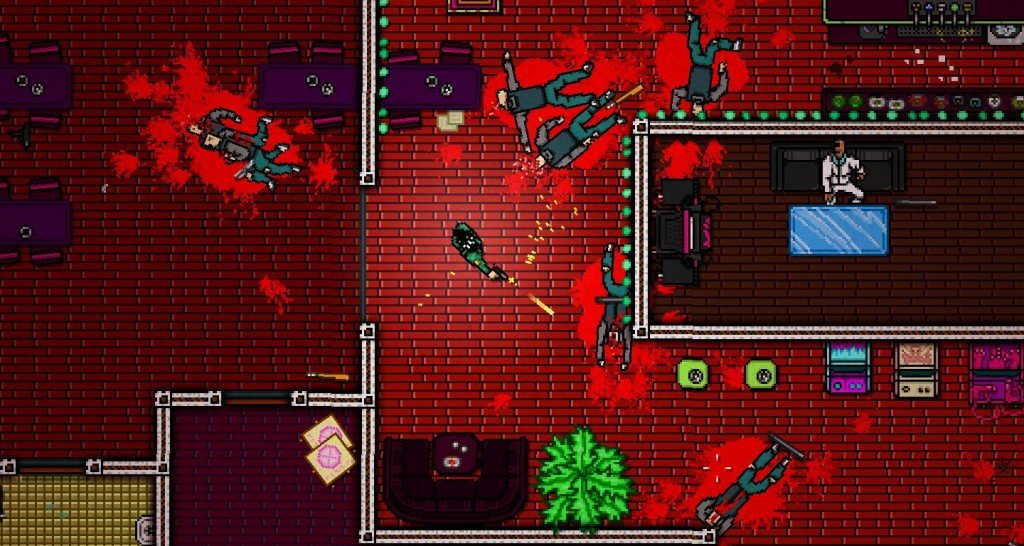 This doesn’t change the overall gameplay that made the original great. Characters move quickly around the screen trying to rack up points by preforming combos. There is access to a variety of weapons, each having subtle differences in speed and reach. Guns also make a comeback and seem to be more in the spotlight this time around. Guns seem more effective and I often found myself using them more often compared to Hotline Miami, where I rarely used firearms. This may be due to the overall size of the levels this time around. My first time going through some levels took up to 30 minutes. I like to think I’m not bad at Hotline Miami because I had played the first one through many times, so it’s a testament to how large and difficult each level can be. With each arena being so large there can often be enemies out side the field of view. These off-screen enemies can be a huge pain and wipe any progress you’ve made in a level with one quick shotgun blast. This adds an element that seems a bit cheap and hard for the wrong reasons, which Hotline Miami avoided quite well. I also found myself firing bullets into the unknown hoping I could get some easy kills to keep my combo going. Surprisingly this worked quite often and I felt like I was cheating a little. Levels often went on longer than I really wanted to sit and go through all at once. Frustration can add up and taking I needed to take a break between parts of levels, in order to clear my head.

Going through each level learning enemy patterns and locations just to slaughter them is satisfying as it’s ever been. Especially with the intense soundtrack and amazing style. Hotline Miami 2: Wrong Number shifts it’s setting from the late 80s to the early 90’s and it does a fantastic job. The grunginess of the 90’s can be felt in each level and even the pause menu mimics that of a VHS tape. It also has a vibrant and diverse color palette that makes the game a joy to look at. The soundtrack that was made just for this game is truly something special. The electronic soundtrack is dark and adrenaline inducing. I often heard loops of the songs that played for each individual level, but I didn’t mind listening to the tracks on repeat because they were that good.

It’s hard to follow up such a huge indie hit with a sequel and Hotline Miami 2 doesn’t quite hit the same stride as the original. While it may be a bit steep to learn for newcomers, players shouldn’t feel bad about jumping right into this one. The added difficulty may not be from the game being actually harder, but the level design and enemy placement. Level length bogs down what is otherwise a fantastic game. With an extra “hard” mode that mirrors level and adds more baddies. Diehard “Hotline” fans will have plenty to keep themselves busy with. With what may be my favorite video game soundtrack of all time Hotline Miami 2: Wrong Number is an enjoyable experience for those who want more of the same.