The PS4 is here! With such a crazy good launch lineup, it’s hard to decide what to play first. Well, luckily there is a game that’s free to download (for PS+ members). Made by the developers of the famous Super Stardust; where colorful explosions and constant action made it impossible to put the controller down. This time, Housemarque brings you the world of Resogun. How does one of the very first games on the PS4 play? Nothing short of amazing.

Going into Resogun, I fully expected for my eyes to be wowed by the pretty graphics and robust colors, but expecting something and experiencing it are totally different. There is an obvious boost in graphics since the PS3 (that shouldn’t surprise anyone), and from the very first minute in the very first level, you will smile from how vivid everything is. The color scheme is varied and bright. The rainbow kaleidoscope will have your eyes glossing over at the memorizing appeal. Every enemy is beautiful crafted with the creative dial cranked to the max. Shooting ships was normal enough, but seeing a caterpillar crawling across the ground shooting bullets into the air roused my curiously even more. The brightly glowingly jelly-fish type creatures flying around have a majestic feel to them—that is—besides trying to kill you. 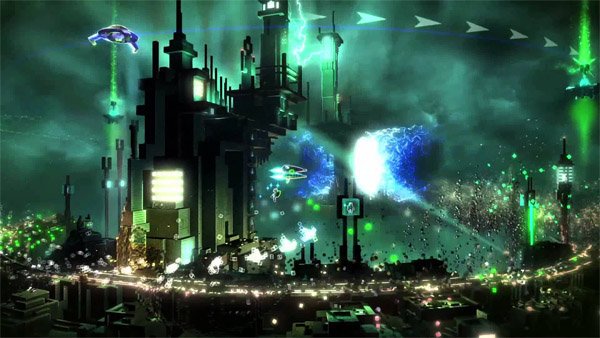 There is nothing easier than getting lost in the visual appeal this game has, but that’s the last thing you want to do. You need to focus on shooting everything in sight, rescuing humans, and trying to keep that ever-important multiplier going. Resogun can be summed up in the simple terms of being a very pretty, side-scrolling shoot ‘em up. Calling it that; however, is really underselling how incredible this game actually is. The gameplay may be basic, but the visuals add an indescribable impact. Every enemy busts into an array of colors that eventually leaves the screen covered in a fireworks display of pixels. The cluttered chaos gives you gleeful amusement as you attempt to navigate the variegated screen.

Resogun takes place on a cylinder that you can circle all the way around, and can even see the other side through the middle of the playing-field. It can feel very reminiscent of that ever classic arcade game Defender, but it’s so much more than that. There is even environmental destruction when certain enemies are destroyed near objects. It’s a small touch since the middle area serves no purpose besides filling in the background, but it adds to the chaos and overall appeal. 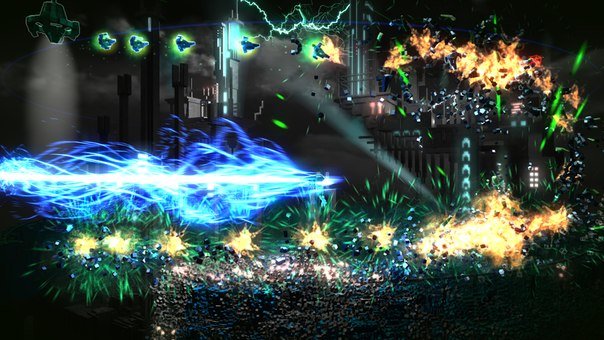 Resogun starts off slowly to introduce you to the basic concepts, and you’ll pick them up pretty quickly. Shoot anything that moves is a pretty good basic strategy. Constantly shooting everything works at first, but as the game goes on, you’ll quickly realize that isn’t enough. This is where the boost, overdrive, and bombs are useful. The boost charges automatically and does exactly as it sounds: it boosts you. You take no damage during this and can smash into enemies—often leaving this as your escape route when you’re being overrun. Overdrive is a giant beam that wipes out everything it hits and charges by collecting little green orbs that enemies drop. And finally, bombs wipe out the entire board—used mostly in times of pure desperation. All these tools will help you in the true purpose of the game: collecting humans.

Technically, you do not need humans to beat the level, but completely ignoring them isn’t exactly playing the game either. They are trapped in cages that are unlocked by eliminating specific enemies when they appear. You then have to pick them up and fly them over to the escape ships (you can also toss them, which is infinitely more fun and surprisingly useful). A lot of the pleasure comes in trying to rescue the little guys from their intimate demise. You’ll hear they are in trouble and boost over to save them. Only to find yourself now in a bad position with oncoming enemies from all directions, and you’re busy trying to get the human off the ground. A personal favorite moment occurred while I was carrying one human, and shooting another one to juggle him in the air to try and rescue both at the same time. And you know what? It actually worked. 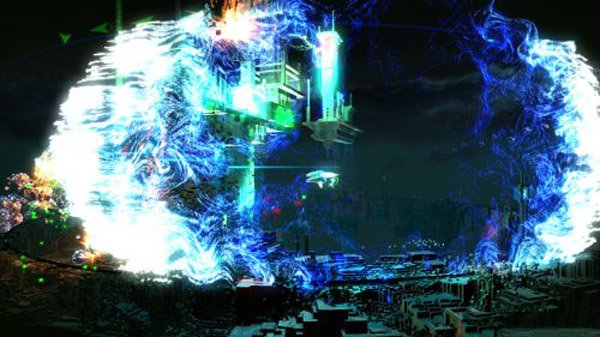 What you’ve read so far doesn’t necessary strike you as to why this game is so amazing. Resogun is definitely beautiful to look at and these screen-shots don’t do the game any justice. The explosions are certainly alluring, and nothing is better than destroying a plethora of enemies leaving the screen littered with clouds of pixels to fly through. The game isn’t that long either. Resogun only has five levels that you can play through pretty quickly. Each level is pretty easy when playing them separately or using continues after game overs. Trying to beat all five levels without continuing is a completely different story and it’s much, much harder when trying to get the highest score possible. The reason Resogun is so damn addicting is solely for the obsessive need to obtain the highest score.

Beating a level doesn’t automatically reward you with a good score. Every human you save gives you points, every bomb you have at the end of the level allocates you points, and the final score is multiplied by your current multiplier. That means, if you want a high score, you can’t use bombs, you need to save all the humans, and you can never lose your multiplier. The last one is the most difficult to achieve, because you’ll lose it if you don’t kill something fast enough. The multiplier will invoke that all too familiar frustration every gamer has a love/hate relationship with. This is why the game has captured me so greatly. Playing through a level not really worrying about the score didn’t have any real appeal besides the most basic of entertainment. The real enjoyment came when I struggled to beat the first level without dying, using bombs, saving all the humans, and never losing my multiplier. Resogun’s appeal sky-rocketed as it felt infinitely more rewarding when I finally succeeded in my goal. As it builds and builds you’ll see your points increase exponentially and you’ll grow nervous afraid to die and lose it all. This is why the game is addicting, and seeing your name rise on the leaderboards gives a unique sense of gratification. 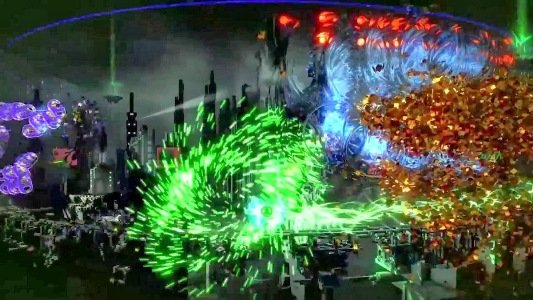 Resogun marks a good start for the next console generations and is well worth downloading. I sat down to test Resogun out before moving onto another launch title, but I ended up playing for hours. The beautiful visuals truly reveal the ability of the PS4, and there are little things more rewarding than watching the entirety of your screen populate with explosions of robust, vivid colors. Resogun presents a welcome challenge that requires quick reflexes and a lot of patience. Since Resogun only has five levels and three ships to choose from; the replay value isn’t found in the quantity of the game, but the quality. Inversely, if you don’t care about high scores, then you won’t find any real lasting appeal. There is an online co-op that brings another level of entertainment, but the game doesn’t change despite adding another player. You do not need to be a hardcore shoot ’em up fan to enjoy Resogun, but be warned: there is a chance you may become a die-hard fan after experiencing this one-of-a-kind gem.

Did you like this? Share it:
An Explosive and Colorful Shooter | Resogun Review
Positives
Negatives
9Overall Score
Reader Rating: (0 Votes)
0.0