Don’t be fooled by the colorful sprites and catchy chiptune music of retro action platformer Castle In The Darkness—it’s a trap! It is actually a quite punishing game with spikes in difficulty, and I mention spikes literally here because they will be the main cause of repeated death screens which a lot of times will feel cheap and unfair and most often result in leaving you cursing at the screen, but the challenges aren’t impossible to overcome with a lot of patience and a lot of practice, plus you have checkpoints and infinite lives to encourage you to keep trying. The game shows off its retro flare with its cool 8-bit and 16-bit inspired sprite artwork, backgrounds, fast paced chiptune music and controls which properly pays homage to the look, feel and sound of classic action platformers from the NES era like Mega Man, Castlevania, Ninja Gaiden and Metroid, but the game also includes more contemporary game play elements, like the seemingly impossible puzzle-like jumps and instant death-by-spike-traps featured in modern indie titles like Super Meat Boy, Spelunky, VVVVVV and 1001 Spikes. Oh, and to make things more challenging, there is no map to help guide you in any way whatsoever through the large interconnected world full of hidden paths and secrets that includes a forest, caves, temples and ruins. 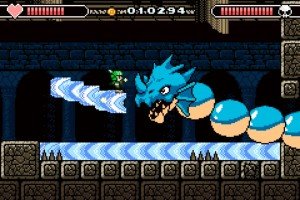 Castle In The Darkness is extremely light on story. Actually, story is pretty non-existent, there’s just enough at the beginning to get you started on your quest with a brief opening scene depicted through text and images, or in other words, the same amount of story exposition as in most retro adventure games. The story begins one night after an army of monsters lead by an evil sorcerer attacks and overruns the kingdom of Alexandria, defeating all of the royal guards in the castle except for one –you! After discovering that the princess has gone missing you embark on a quest to find her and restore order to the kingdom—armed with only your crappy sword in hand. Just as in other retro adventure games, you encounter NPCs throughout the world that give you some brief snippets of information regarding the story, world and secrets or sometimes offer services like weapon vendors or inn keepers.

One of my favorite features about Castle In the Darkness is its large, explorable, and interconnected world very reminiscent to Metroid, Simon’s Quest or even the more current Dark Souls. It’s made up of different regions, like a forest, caves, ruins and a few other secret optional locations that all feature a unique set of enemies, boss fights, and color palettes that really distinguish each area from one another, which is crucial to the game play because the game does not feature a world map of any sort. Instead you are expected to familiarize yourself with each area by exploring every little corner, poking every cracked wall and revisiting previous areas whenever you acquire new upgrades via a series of Warp Points in order to discover new paths and reach previously inaccessible spaces. The world also features a lot of cameos from familiar characters and locations from retro games like blue hedgehogs, a boss that looks like a dragon from Bubble Bobble, and even a clock tower level reminiscent of Castlevania complete with Medusa heads. 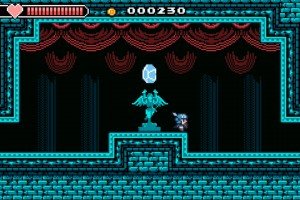 As for action, the game is limited to attacking and jumping with a small RPG component, but things can get pretty complex and frustrating when tricky puzzle-like timed jumps and spike traps are combined which are typically solved through trial-and-error –and after accumulating a high death count. As for the RPG elements, you can acquire upgraded weapons and armor as well as magic spells from vendors, NPCs, secret locations or rewards for defeating bosses, of which there are many. The other feature that really makes the game stand out is the countless number and variety of boss fight encounters which all have unique designs and attacks that will require you to learn their combat patterns in order to defeat. Experimenting with different weapons and magic during a boss fight usually achieved greater results whenever I hit a wall that hindered my progress. You receive a boss heart as a reward after defeating a boss, like in Zelda, which adds an extra tiny sliver to your health meter, and every little bit helps in this game.

As much as I enjoyed the game, I did have some minor annoyances with it – mainly the save system. The game allows you to save your progress at certain points in the game by accessing save statues which in actuality is a great amenity considering that most retro games expected you to complete the entire game without saving at all, but after defeating a boss in this game you have to backtrack to the nearest save point which also entails dealing with whatever enemies or tricky obstacles you had to overcome in order to reach the boss in the first place. If you fail to do so, then you’ll have to restart, navigate through obstacles to the boss fight again and if you succeed again, then there is the issue of making it back to the save point again.  You can see how the sense of achievement after defeating a tough boss can easily be destroyed by carelessly falling into a death trap on your way back to save your progress, but it’s just another element that adds to the overall challenge of the game that reminds you to stay focused at all times just like in Dark Souls. 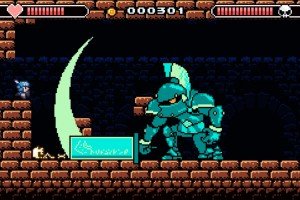 Overall, developer Matt Kap, who also designed the artwork for Binding of Isaac, has created a really great challenging game here that borrows game play elements, visual and sound designs from some of the most memorable NES games like Simon’s Quest and Metroid, and continues the devious platforming trend featured in games like Super Meat Boy and 1001 Spikes, while also creating a large, interconnected world to explore full of secrets to discover. Castle In The Darkness is another great release by publisher Nicalis, Inc. which already includes a great lineup of classic indie games like Cave Story, VVVVVV, and Binding of Isaac. If you are looking for a genuinely challenging retro style game with puzzle-like platforming, countless boss fights, a large open world to get lost in without any hand-holding then Castle In The Darkness is it. Fair warning, this game aims to be tough and achieves in doing so.

Did you like this? Share it:
Alone In The Dark | Castle In The Darkness Review
If you are looking for a genuinely challenging retro style game with puzzle-like platforming, countless boss fights, a large open world to get lost in without any hand-holding then Castle In The Darkness is it. Fair warning, this game aims to be tough and achieves in doing so.
Positives
Negatives
9Overall Score
Reader Rating: (0 Votes)
0.0