The murder-mystery is one of the oldest stories ever told: following the killer’s trail and piecing the clues together to uncover the grim, shocking truth. It’s nothing new, which is all the more reason why Square Enix’s Murdered: Soul Suspect deserves some credit for offering an interesting spin on the age-old concept. You see, the killing that Murdered’s protagonist Ronan O’Connor is investigating is somewhat close to his heart… it’s his own.

The game begins with Ronan getting pushed out of a multi-storey window and hitting the pavement below. Just as he seems to show fleeting signs of life, the killer shows up to finish the job with a series of bullets. But rather than death representing the end for Ronan, it is just the beginning. Tasked with the “unfinished business” of discovering the truth behind who killed him and why, he is trapped in limbo as a ghost until his final case is closed. 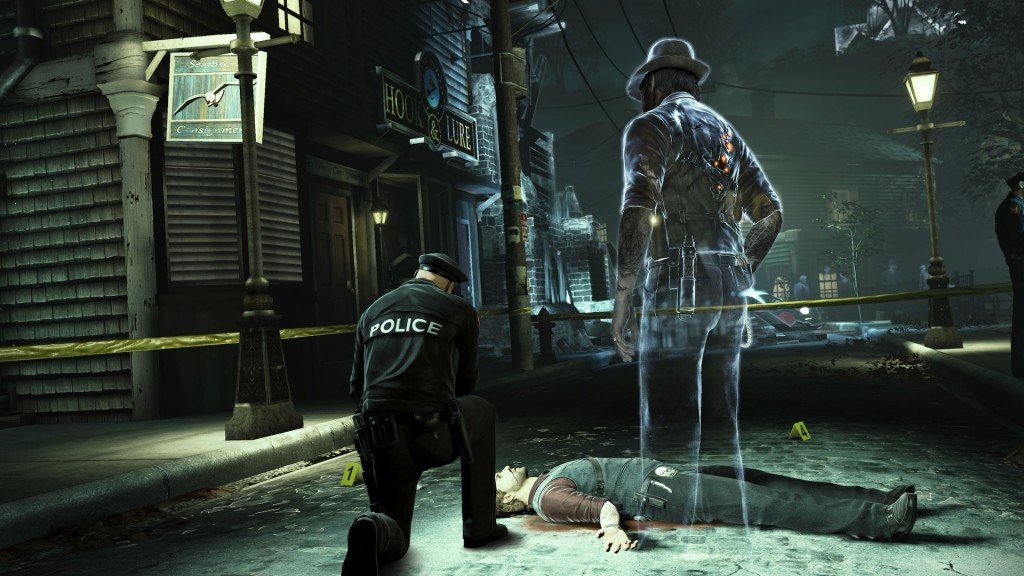 Yup. He looks dead to me too.

Compelling set-up aside, Murdered is unfortunately a rather derivative experience from thereon in. Ronan, for a start, is a walking cliché: a fedora-wearing, chain-smoking, gruff-voiced detective who brings nothing new to the table whatsoever. Apart from being dead of course. And you might think that playing as a ghost would offer plenty of benefits when trying to solve a crime, and in turn, provide some innovative gameplay opportunities. And it probably does, but developer Airtight Games haven’t really explored the idea enough, meaning that the experience comes across as half-baked at times.

Sometimes Ronan feels like a true spectre, passing through walls and possessing cats (really) and at others he feels like a translucent version of any other gaming protagonist. Certain “sanctified” walls can’t be passed through, and oddly Ronan still has to climb stairs. His ghostly “powers” extend to possessing NPCs and potentially influencing their actions, but this is disappointingly reserved for purely scripted moments. He can read the thoughts of those around him, but it turns out everyone in the town of Salem is very dull and rarely ponders anything interesting. Ronan also has the incredible ability to teleport a few feet in front of himself, as well as making certain scripted objects appear/disappear and possessing a select few inanimate objects to distract guards (think making a printer suddenly turn on, or a phone ring). Like much of the game, these ideas all feel under-explored and as a result, underwhelming and uninspired.

Murdered’s gameplay is something of a mixed bag. Relatively quickly, things settle into a rigid pattern, with the flashpoints being the various crime scenes that Ronan has to investigate. Whilst this may sound interesting, it boils down to little more than walking around and pressing a button to look at a clue. Once you’ve found all the relevant pieces of evidence in the vicinity, you then have to pick the most salient bits of information that will help you to advance the story at that moment. Unfortunately these investigations never truly let go of your hand and allow for any real detective work to occur, its’ more just a case of going through the motions, which instantly removes the feeling of satisfaction from uncovering the truth. This is only exacerbated by the game’s sometimes-warped sense of logic, resulting in frustration when you try to piece clues together to move things along. 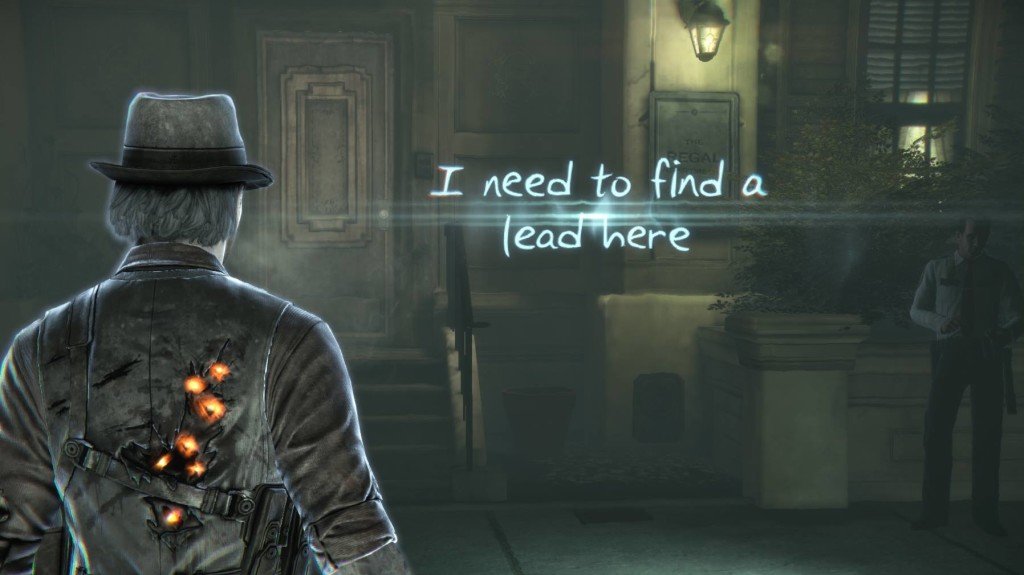 In-between the story-related areas, plenty of time will be spent wandering around Murdered’s semi-open game world. This downtime allows for some exploration, with plenty of collectibles to find, as well as the odd side-mission to complete. These are triggered when Ronan happens across a ghost trapped in limbo, who needs something to be resolved before they can find peace. Whilst quite basic, these missions do at least provide a nice distraction from the main storyline.

The biggest issue with Murdered’s gameplay is without question its simply rubbish combat sequences. Being a ghost, Ronan doesn’t exactly have much physical clout. So when a few demons randomly show up, you are reduced to keeping out of their direct line of sight by hiding in clouds of “ghost residue”, before sneaking up and pressing a button to defeat them one-by-one. This overly simplistic and needless aspect of the game wouldn’t be so annoying if it weren’t for the fact that if you get discovered, you have no choice but to run away and hide until the demons stop their search for you, before starting the process all over again. Totally pointless doesn’t even begin to cover the addition of these segments to the game. 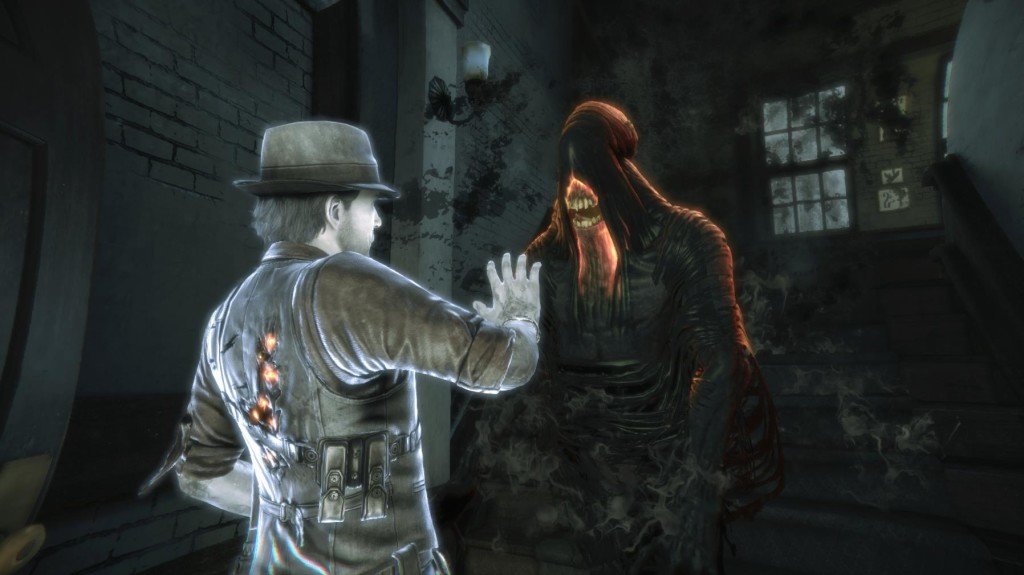 All is not lost though. Murdered’s narrative is enjoyable and provides enough motivation to keep you progressing through the game. Its ending is excellent as well, with the revelation of the killer’s identity providing a nice and unexpected pay-off. And aside from Ronan himself, some of the characterisation is skilfully done. Joy, a young medium who can see and speak with Ronan, proves to be an interesting, if slightly whiny, foil to our derivative detective. The game’s setting of Salem is also excellently realised. Using a real-world location (in Massachusetts, USA) that is steeped in folklore about witch trials and the occult really allows for an authentically moody backdrop for the game’s otherworldly goings-on. And for those interested in such things, there is plenty of historical information about Salem to be discovered and read, a nice touch that is never forced down the player’s throat.

Murdered started life as a last-gen game, a PS3 and Xbox 360 exclusive, before eventually being ported over to PS4 and Xbox One. And that is what it feels like at times: a port. The visuals and, in particular, the plodding animation don’t exactly do our shiny new home consoles justice. Credit has to be given for some of the voice acting though, generally it is pretty good, and helps to portray the tone of the narrative and surroundings.

And yet, despite Murdered: Soul Suspect’s numerous flaws, the game does have an odd charm that makes it worth playing for some. The story offers up some genuinely affecting and shocking moments and is without question the game’s highlight. At its very core, the game’s concept is an intriguing and unique one, but it just hasn’t been nurtured and developed enough into a compelling gameplay experience. The combat is just a nonsense, and the investigations are generally just an exercise in box-ticking. But just when this game seems on the verge of flat-lining completely, its enjoyable narrative and authentically realised setting offer up a few glimmers of life.

This review is based upon a retail copy of Murdered: Soul Suspect for PS4. Also available on Xbox One, Xbox 360, PS3 and PC. Developed by Airtight Games and distributed by Square Enix.