The Tales franchise has a long and storied past. If you’ve loved an RPG before, chances are you’ve at least heard of the Tales series of games. When a franchise has been around for as long as this series has, patterns start to develop and fans start to know what they are going to get before the game is even released. That seems to be the case with Tales of Hearts R, it is a rock-solid RPG with great mechanics, but it isn’t revolutionary by any means. This certainly doesn’t mean that this isn’t a good game because it most certainly is. It just means that if you are looking for something that doesn’t fit the mold, this game may not be for you. 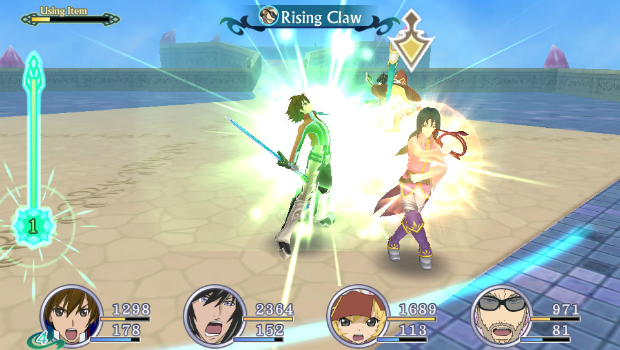 Tales of Hearts R tells the story of Kor Meteor who is a young warrior in training under the tutelage of his master warrior grandfater, Sydan Meteor. The Meteor family have a special ability of be a Somatic warrior or one whose soul drives the power of their weapons. From the opening scene, Sydan passes his power to Kor giving him this powerful ability. Meanwhile on the other side of the ocean, Hisui  and Kohaku Hearts are escaping a powerful witch who is wreaking havoc in their hometown. The two take to the ocean, but the pair is separated by a storm. Kohaku winds up in Kor’s hometown, but she eventually meets up with Kor and convinces Kor to help her find her brother. Adventure ensues.

From a presentation perspective, the game looks great on the PlayStation Vita. The world is brightly colored and vibrant, encouraging players to explore the map to see what lies around the corner. The game is an open world RPG, so players will have a access to a large over-world to play in with several dungeons to explore and fight in. There are several towns throughout the game allowing you the opportunity to talk with NPCs or purchase items from a shop just like any RPG you’ve played. There is a fairly linear path to the game, but there are several secret areas and paths which give some depth to the adventure. While there isn’t anything particularly flashy presentation-wise, it is a solid setting for the game nonetheless. 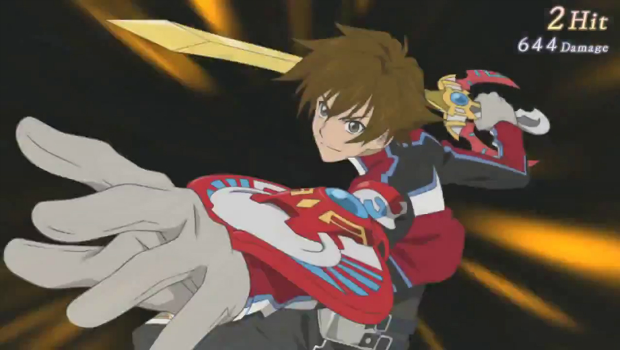 The battle system in Tales of Hearts R is really where this game shines. This game is an action RPG so you’ll be performing actions on the fly rather than having the action stop to make battle decisions. The battle system is fairly simple in its execution, but it offers several complex battle mechanics to make the game as deep or as shallow as you’d like. It really is a perfect mix of action and strategy. Further deeping the strategic elements of the game is the character placement before a battle begins. You’ll have the ability to chose where on the map you’re characters will start. The closer to the enemy you place your characters, the more aggressive they become and they take a more melee / tank approach to the battle. If you place your characters further away from the enemy, they will become more passive doing more ranged damage and even fleeing when they take too much punishment. This system works really well and makes this one of the better action RPGs out today.

In addition, there are several special attacks which are really fun to execute and watch. The first type of special attacks you have is the Chase Link attacks which come a little later in the game. After you attack the enemy successfully four times in a row while this mode is active, you’ll send the enemy into the air. You’ll then have a limited amount of time to continue attacking the enemy. Once you’ve dealt enough damage, or you want to exit the mode, you can execute a finishing move which does massive damage. The other type of special is the Spiria drive mode. This acts like an overdrive in your standard RPG. This allows you to become faster and stronger for a short time. It looks great presentation wise and becomes invaluable during boss battles. 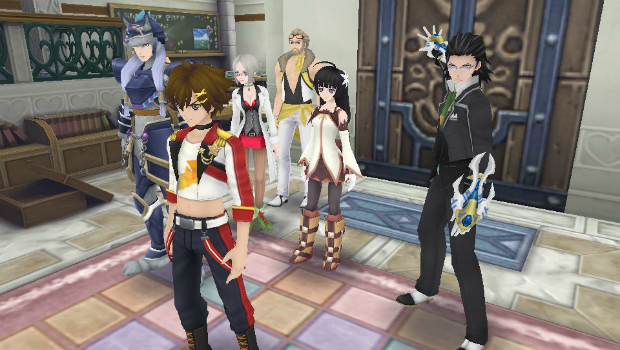 The enemy AI was also very interesting for this kind of game. In games like Final Fantasy, enemies will just stay in one place and try to attack your party as a whole. However, in Tales of Hearts R, the enemies have a little more strategy to them. They will read your decisions and try to counter them as best they can. For instance, if you place your characters in a ranged position, the enemy will set up their characters to balance that out. The enemy will also chase characters that have been heavily damaged to try and finish them off. It offers a wide variety of actions to react to and presents a new layer of strategy on top of an already heavily strategic RPG.

While the battle system is great, there is plenty to do outside of combat to make sure you are ready to take on stronger enemies. For instance, the game has a robust leveling system which takes your experience and allows you to invest in several different disciplines. As you spend points in a particular category, you will unlock special Artes attacks, skills, weapons, and stat bonuses. All of these perks become invaluable the further you progress in the game. Each category offers different bonuses, but it allows you to choose which direction you want to take your character. The upgrade system works quite well and gives you the tools you need to win. 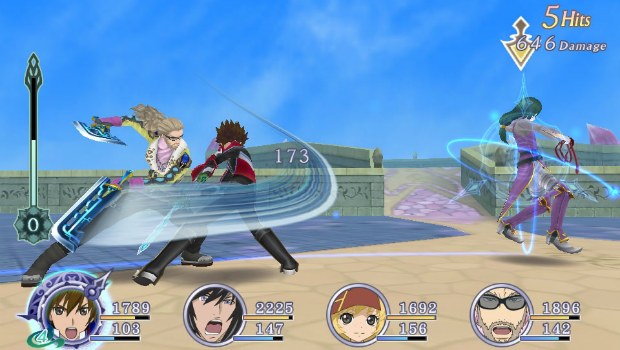 All in all, Tales of Hearts R is a solid RPG. If anyone out there was looking for a starting point for JRPGs, this game would be at the top of my list. This game offers a fun and interesting battle system with plenty to sink their teeth into. It does get a little easy the more powerful you become, so no matter what your skill level is, victory will never feel too far from your grasp. Unfortunately, for Tales fans in particular, the game doesn’t really offer anything they haven’t seen before. While the battle system offers a little variety, the game isn’t vastly different from any other game in the series, so for these fans in particular, the game can be a little formulaic.

Whether you are a tried-and-true RPG fan, or you are looking for your next RPG adventure in a more casual setting, Tales of Hearts R is a great choice no matter what you are looking for. While this is a JRPG by design, it has seemingly learned from WRPGs and made Tales of Hearts R appealing to all RPG fans. We highly recommend this game and it is one of the better RPGs to come out in a while.