Robot Unicorn Attack 2 is a thought-provoking case study into man’s inhumanity to man, and draws conclusions that will help shape the very foundations of future generations… well, uh, something like that…

No, seriously, Robot Unicorn Attack 2 really is as mad and nonsensical as the name suggests, but that most certainly isn’t a bad thing. At its core RUA2 is an endless runner, a genre that’s ten-a-penny on the App Store. As the name suggests, you’ll spend your time running from left to right, dodging whatever obstacles may be in your way, with the aim of making it as far as possible through each level. This game’s all about hitting those high scores and climbing the online leaderboards.

But the playful sense of lunacy that pulses through the veins—or wiring—of our robotic unicorn pal really helps to differentiate Adult Swim‘s latest release from the rest of the pack. It also boasts some rather addictive gameplay. As with all great iOS games, the controls are simple. The actual running is automatic;  tapping the left side of the screen makes you jump, while the right side triggers a dash. Dashing is mainly used for smashing progress-blocking stars or attacking enemies, who occasionally pop up with the intention of halting your animatronic steed in its tracks. 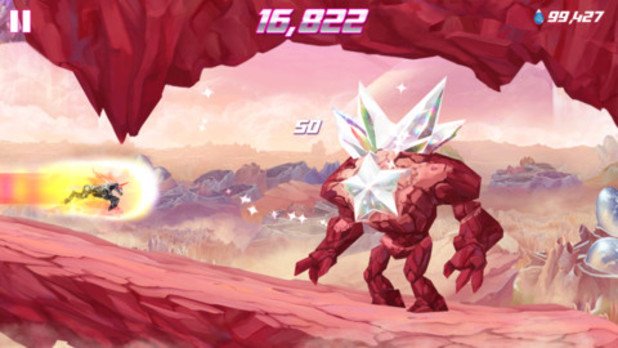 Developer PikPok deserves credit for taking such a simple premise and then enhancing it with a few well-thought-out additions. Chief amongst these innovations is the new team mechanic. Each player who completes a round of RUA2 gets to choose between Team Rainbow or Team Inferno, and from that moment on, everything you do in-game will contribute towards your team’s progress. Daily challenges pit the two sides head-to-head and help lend a sense of purpose to the whole affair. There’s definitely something undeniably cool about joining forces with your unicorn comrades across the globe so you can trounce the other team.

Individual challenges have also been introduced and take the form of the common “complete three tasks to earn stars” system that features in the likes of Jetpack Joyride. The stars you accumulate help you level up, which earn you unicorn tears (these can also be collected whilst playing). Tears are in-game currency and can be spent on one-off boosters and upgrading your unicorn. Buying new wings, horns, and tails will not only make your robotic stallion look more badass, but also has gameplay effects, like allowing your unicorn an extra jump while in mid-air or increasing your running speed. 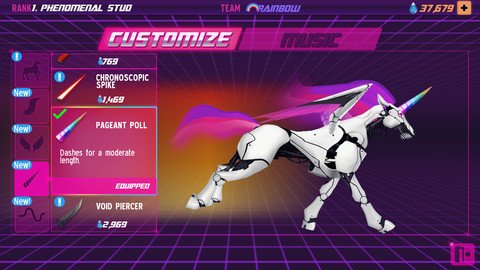 RUA2 is a little lacking in the level design department. If you have online access, a new level will be available to download each day, but these simply feature rearranged level furniture rather than offering a truly new experience. Notably, there is an Ice World to be unlocked at level 15 (or that can bought earlier with a whole heap of tears); this mixes things up a bit, but a little more variety would have been welcomed.

Thankfully, RUA2‘s presentation is sublime. The visuals are an explosion of neon rainbows—from the menus, to the suitably dream-like backdrops—and it all suits the tone of the game perfectly. The unicorn itself is nicely detailed, with an excellent animation that gives the player a sense of mounting speed as things get more hectic. The aforementioned lunacy comes into play with the appearance of creatures, like the dolphins or flying whales, that randomly pop up in the background when you reach certain points in a level. Hearing their clicks and cries as they attempt to pull you out of your zen-like state of concentration is rather surreal, and despite their presence on-screen making no sense whatsoever, they rarely fail to raise a smile. These creatures also act as useful markers of your progress through each level.

Every time you boot up the game and start playing, you’ll be greeted with a delightfully positive quote, such as “scatter your hopes and dreams” or “a fiery death awaits”—this nicely sets the tone for what follows. From a technical standpoint, I noticed quite a bit of lag on my 4th generation iPod touch, particularly at the start of each level. Switching over to playing the game on an iPad alleviated these issues. 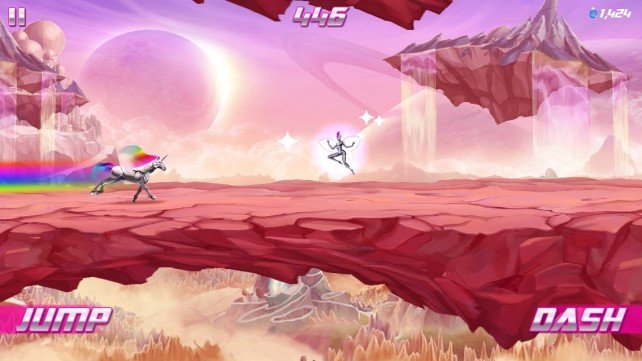 The first Robot Unicorn Attack was released as a paid app, but the sequel follows an increasing trend for “freemium” games: you can download and play the game for free, but certain content is locked away until you cough up some cash. RUA2‘s paid content is thankfully all superficial: extra music tracks and unicorn tears are all that your money will get you. However, the basic music is perfectly serviceable and, given that you can play your own music in the background anyway, you shouldn’t need to shell out any cash to fully enjoy RUA2. The downside of the game’s freemium status is the all-too frequent appearance of adverts that pop up during the loading screens, but the devs have gotta pay their bills somehow.

In amongst the slew of endless runners on iOS, Robot Unicorn Attack 2 comes highly recommended. It’s a near-perfect example of the genre, offering that impulsive, “okay, just one more go” style of gameplay. It’s quite fun and is best enjoyed in short bursts, like when your commuting to work or taking care of “business” on the porcelain throne. At the end of the day, however, RUA2 is just an endless runner—and contrary to that definition, there will come a time when your interest in the game will end.

This review is based upon a downloaded retail copy of Robot Unicorn Attack 2, available for iOS and PC, and coming soon to Android. Developed by PikPok and published by Adult Swim.