And so it’s that time of year again: the ultimate showdown between the two behemoths of video game football. EA’s all-conquering FIFA series has justifiably been ruling the roost for many a season now, but there’s disquiet in the camp, with some gamers complaining that this year’s effort isn’t the required step up in quality. So is it possible that EA have taken their eyes off the ball and left Konami’s PES 2014 with an open goal to secure a rare victory? Is it possible that any more tenuous football-related puns could be shoe-horned into this review? For the answers to these questions and more, continue reading…

This is a pretty big year for PES. With Kojima Productions’ much-lauded Fox Engine (the tech behind the sublime-looking Metal Gear Solid V) being incorporated into the game, this represents an opportunity for Konami to give the series a real shot in the arm, one that just might allow it to move into the impending new console generation with its nose ahead of its huge rival. In several ways, the new engine really has freshened things up, mainly in the animation department, and this allows for a much more nuanced and technical game of football to be enjoyed. 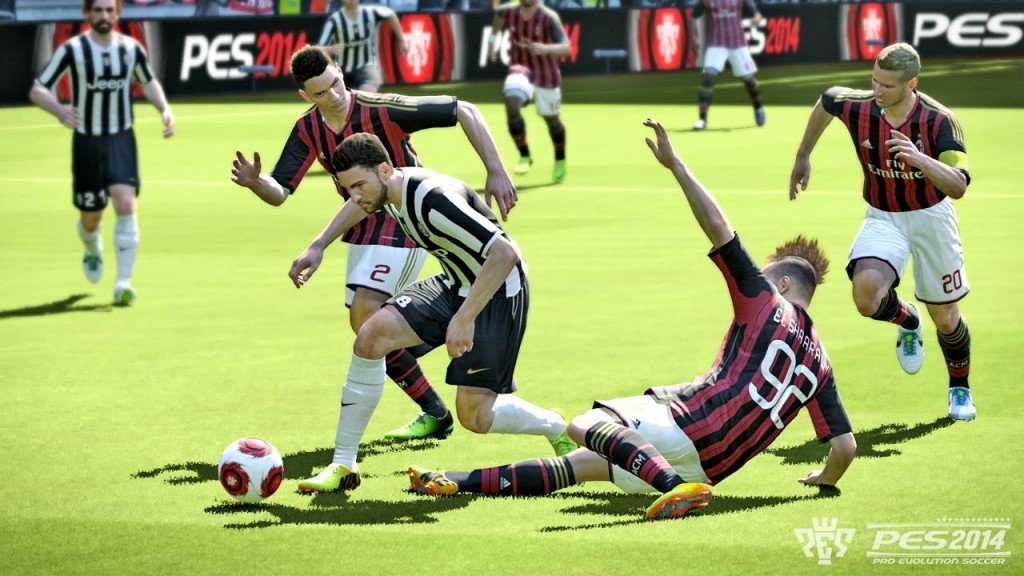 Impressively, player and ball now feel like two truly independent objects. The ball behaves a lot more unpredictably in general play, and as a result you’ll never know quite what to expect next, whether in possession or not. And ultimately, capturing the always-surprising “who-knows-what-will-happen-next?!” nature of real-life football is surely the very kernel of what a gaming depiction of the beautiful game should be aiming for. Also worth noting is how nimble certain players feel when on the ball. The more technically-gifted stars are able to take little touches to work the ball around the oncoming defender, shifting their body weight instinctively to keep hold of possession. When added to small-but-significant features like beautifully inventive and realistic first touches that open up the space, and the authentic way in which players hurdle challenges, it’s clear that the Fox Engine really has allowed PES to up its game in key areas and take that extra step towards the holy grail of video game football. 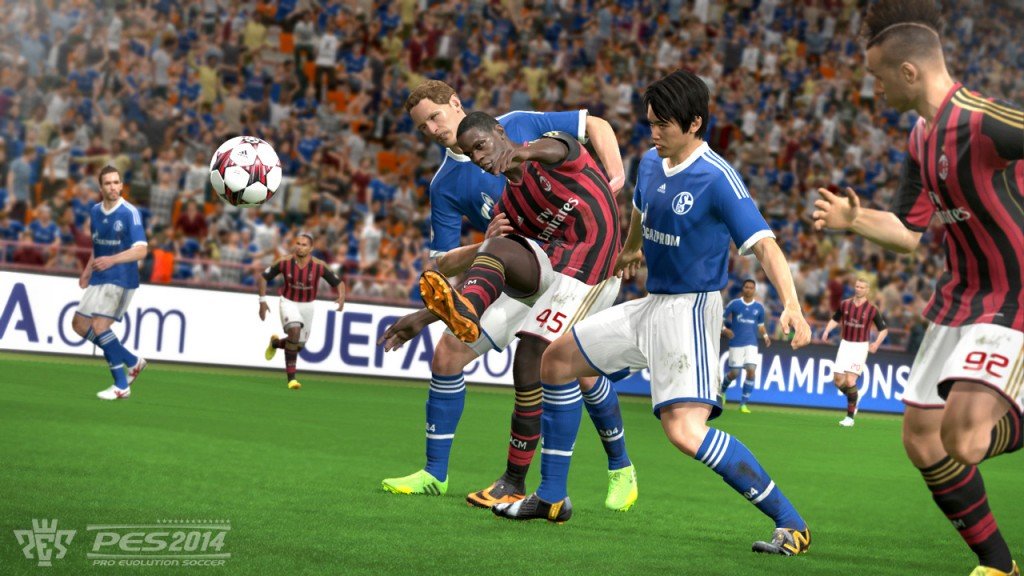 The gameplay improvements extend to passing and shooting as well. The wider range of animations allows for far more contextual and fluid actions to take place when you choose to pass or shoot. Passes have a nice zip to them, which is especially satisfying when executing a perfectly weighted through-ball to put your center forward through on goal. And when said center forward does bear down on the ‘keeper, he has a much larger repertoire of shots at his disposal, resulting in goals being scored that simply weren’t possible in previous iterations of the game. Again, this variety really helps the gameplay feel fresh and organic, an area in which it beats FIFA with considerable ease.

It’s not like PES‘s gameplay isn’t without its issues though. The AI in particular is frustratingly erratic to say the least. For every moment in which a goal-scoring opportunity is created because of a computer-controlled player making a brilliant off-the-ball run, there will be just as many, if not more, instances in which a defender will just stand and watch as play passes them by, or a team-mate will impede your progress by failing to get out of the way. Goalkeepers are still the worst offenders though. A perennial issue with PES, the ‘keepers are maddeningly inconsistent: one minute they will be brilliantly and thrillingly tipping a 30-yard shot over the bar, and the next they’ll be hopelessly fumbling a straightforward shot into the path of an oncoming striker, before stopping and staring as they tap in for an easily avoidable goal. Of course there is an argument to be made for Konami attempting to capture the unreliable fallibility of human goalkeepers, but that just seems a poor excuse for what is simply substandard AI.

Presentation-wise, PES 2014 really is a mixed bag. The Fox Engine has allowed for some gorgeous pre-game cut-scenes that really help to ramp up the atmosphere, and some of the player likenesses are simply stunning, the sort that at-a-glance you wouldn’t be able to discern from the real thing. But on the other side of the coin, the game seems to really struggle and stutter every time the ball goes out of play, as it will momentarily freeze more often than not. This may only be a minor complaint, but it will inevitably frustrate and take you out of the moment after the no-doubt slick gameplay that preceded it. The menu screens are also somewhat cumbersome and not especially pleasant to navigate. In fact, the overall presentation away from the pitch really seems to have been given no attention whatsoever in the improvements department. It’s mostly a case of sluggish menus with rubbish music and far too many loading pauses.

At the risk of retreading old ground from previous iterations of PES, another major issue still remains with this year’s installment. I am of course talking about the painful lack of licences in the game. With just Manchester United as the only Premier League team with the correct kit/name/badge/etc, playing as North London (aka Arsenal) or Merseyside Red (Liverpool) really does leave a lot to be desired. The game does still feature the welcome fully-licenced Champions League and its South American and Asian equivalents, but they ultimately just aren’t enough. After all, what’s the point of playing in a painstakingly recreated Champions League match (iconic music et al) only for you to not actually be able to play as your favorite club? It might only be superficial, but these things make a difference in games like PES and FIFA, and this is one area in which Konami’s effort is still woefully lacking. Also unforgivable is the still-atrocious commentary in the game. Within your first match you’ll already be coming across repeated phrases and the whole thing just sounds horrifically robotic and unnatural. Again, with FIFA generally able to offer high quality and authentic commentary, there really is no excuse with PES failing so miserably in this area. Konami seem to be making efforts to improve the matchday atmosphere (crowds are much better this year, both visually and atmospherically) but they just seem to be ignoring the basics, something that, until remedied, will always hold the game back. 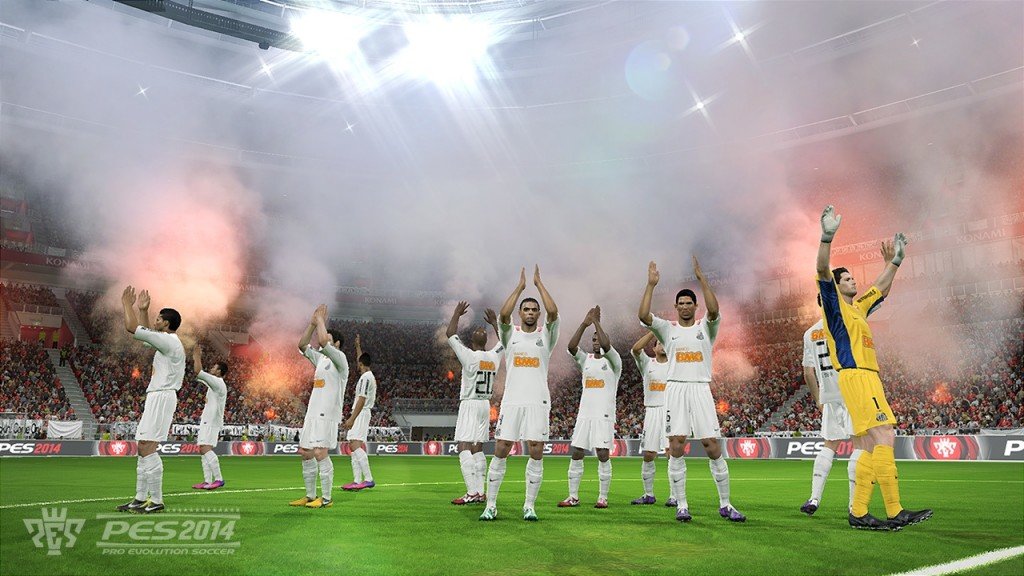 In terms of the modes available in PES 2014, it’s disappointing to discover that little has changed from last year’s game. As previously mentioned, you can play through an entire Champions League campaign, as well as the Europa League, Copa Libertadores and Asian Champions League. Generic cup and league competitions, as well as the obligatory training mode, are also available, alongside the returning Master League and Become a Legend. The former is the potentially life-consuming mode in which you take control of both on and off-the-field matters in an attempt to take a lowly team to the very top of the game, and the latter is the now slightly stale option of adopting the role of a single player throughout their career. And of course, the game also features the usual suite of online options to play friends or foes across the globe. All in all, PES 2014 contains a pretty uninspiring selection of game modes, and this could really do with freshening up before next year’s debut on next-gen consoles, even if it’s just some new ideas being introduced into Master League for starters.

To adopt yet another football pun, PES 2014 as an entire package is reminiscent of a club in a transitional phase. The introduction of the Fox Engine has unquestionably breathed new life into the quality of the game on the pitch, but it most certainly isn’t the finished article just yet. It’s interesting that, unlike FIFA, Konami have chosen not to release this year’s version of PES on next-gen consoles, and ultimately that seems to be a wise decision. PES 2014 comes across more as a statement of intent; a demonstration of what can be achieved if the devs are given more time with this exciting new engine, and so by giving themselves the extra year before making the generational leap, they can ensure they’ll hit the ground running on PS4 and Xbox One. With another year of getting to grips with the new tools at their disposal, ironing out the small niggles that hamper the gameplay, and hopefully putting their legal team to work on nailing down a few more licences, PES may just be in a position to pip the mighty FIFA to next year’s title. But as for this season, it’s another nearly-but-not-quite campaign for Konami…

This review is based upon a review copy of the PS3 version of Pro Evolution Soccer 2014, published and distributed by Konami.