Capcom’s decision to release their newest chapter in the Revelations series by splitting it up and distributing it via an episodic format works surprisingly well for the survival horror series. The bite-sized and short length TV-like episode design can be attributed to the original game being intended for a portable system, and as a result feels far more focused and disciplined than its console counterparts of the main series and distills the Resident Evil game play formula down to its basic essence without unnecessary filler that are usually required for padding out big triple-A games these days. I need not mention the internet debacle over game length and value regarding the recent PlayStation 4 release of The Order: 1886, where the internet seemed to have let out a collective groan in a sign of disapproval when the length of the game was revealed to have been too short to merit a full price purchase. While Revelations 2 doesn’t claim to be creating any significant shake-up to its familiar game play formula, it certainly feels bold as it experiments by exploring new ideas and treads new ground that makes the series feel both fresh and new at the same time, albeit in a trickled down fashion. 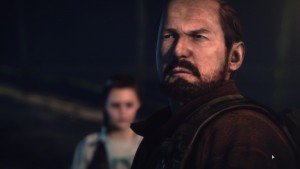 The game kicks off after Claire Redfield, a returning favorite from Resident Evil 2 and Code:Veronica, gets kidnapped and imprisoned in a penal colony on an island along with her fellow employees, including newly introduced character named Moira Burton, who coincidentally is the daughter of Barry Burton from Resident Evil 1 and also appears in this story. After Claire wakes up in a prison cell and finds Moira, they both set off to escape the prison together, events which eerily mirror the plot and setting of Code:Veronica, thus continuing Claire Redfields narrative. Once you complete Claires campaign, you automatically begin Barry Burtons campaign who arrives at the same prison colony in search of his missing daughter Moira.  If you’re a Resident Evil fan then you know that the series has continued to maintain its story continuity since the first game and brings back familiar characters in every game and part of the fun is catching up with old characters and continuing their stories by following them on new adventures. If you’re not a fan or familiar with the games in the series then this is a great place to start because the story is a standalone survival horror mystery that doesn’t require much background to understand. As is usual of the series, you get the bigger picture through items and files left behind by survivors, or towards the end of the game after defeating the main villain who typically has a ‘reveals all’ moment.

The Revelations series was originally designed for the Nintendo 3DS portable system, and then later ported to consoles and PC. This time around, Revelations 2 bypassed the portable in favor of console and PC releases, and as a result the game has an inconsistent graphics quality which looks like a last generation game at its best or at its worst it looks like a ported game with uprezzed graphics and muddy textures. The visual quality isn’t very consistent to say the least, but this wasn’t originally intended to be a next gen game. There are some moments in the game with nice visual effects like lighting or rain to give it a bit of window dressing and a lot of the game takes place in dark corridors which when mixed with a great sound design, makes the atmosphere all the more effective making for a tense experience which is what really counts.  The prison layout, with its narrow hallways and unavoidable enemies creates enough tension as it is, and afterwards when Barry is escorting a young girl through dark woods filled with enemies that would feel more at home in Silent Hill, you’ll be more concerned about getting to the next well lit area instead of staring at textures. 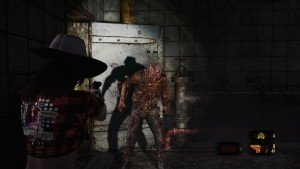 Gun play mechanics haven’t really changed that much from previous games. You can still target specific locations on enemy joints to disable them to buy time for more shots, or occasionally enemies will sprout a puss filled growth that will cause much more damage to them than a regular shot. It’s an overall improved combat experience compared to the cheap bullet sponge enemies from the first Revelations game.  The A.I. co-op partner system from Resident Evil 5 & 6 also returns. In this case both Claire and Barry are equipped with firearms, while their partners Moira and another new character Natalia, are equipped with weak melee weapons and occupy supportive roles. Natalia, a little girl who utilizes supernatural abilities, is partnered with Barry and provides assistance by sensing enemies or reaching new areas through crawl spaces to unlock doors. Moira is equipped with a flash light which can temporarily blind and stun enemies, as well as a crowbar for melee combat or unlocking certain doors that are boarded up with wood planks—strangely reminiscent of ZombiU on WiiU. Having partners without fire power definitely adds to the challenge of the game since you’ll always feel like you have to protect them, or worse when you have to separate from each other, but I never had trouble with either A.I. partner. You can also switch between characters at any time. Once you complete the A-Side and B-Side scenarios of the campaign, you will be rewarded with points to unlock abilities through a skill tree menu to increase any number of character traits including increased weapon damage, melee damage, etc. You can also find gun parts and upgrade stations throughout the game.

I have to mention that I only played through the main campaign and Raid mode in single player mode on PC and can’t provide any feedback regarding co-op or multiplayer experiences, but overall, Revelations 2 is a really great entry in the Resident Evil game series and a must play experience for fans of the series and a great entry point for new players. A lot of the game play has been streamlined for action and much of the back tracking and puzzle elements that made up the original games have been mostly removed, and only ever required for narrative purposes, hence the A-Side and B-Side design of the game. While the main campaign for the first episode is about 2 hours short, it is really well designed and makes for a fun theme park ride with a low admission price and includes a Raid mode which provides plenty of arcade style run and gun missions, many weapons and skills upgrades to unlock, and will provide far more hours of game play than the campaign.

This review is based on a retail copy of the PS4 version of Resident Evil Revelations 2 – Episode 1: Penal Colony published by Capcom