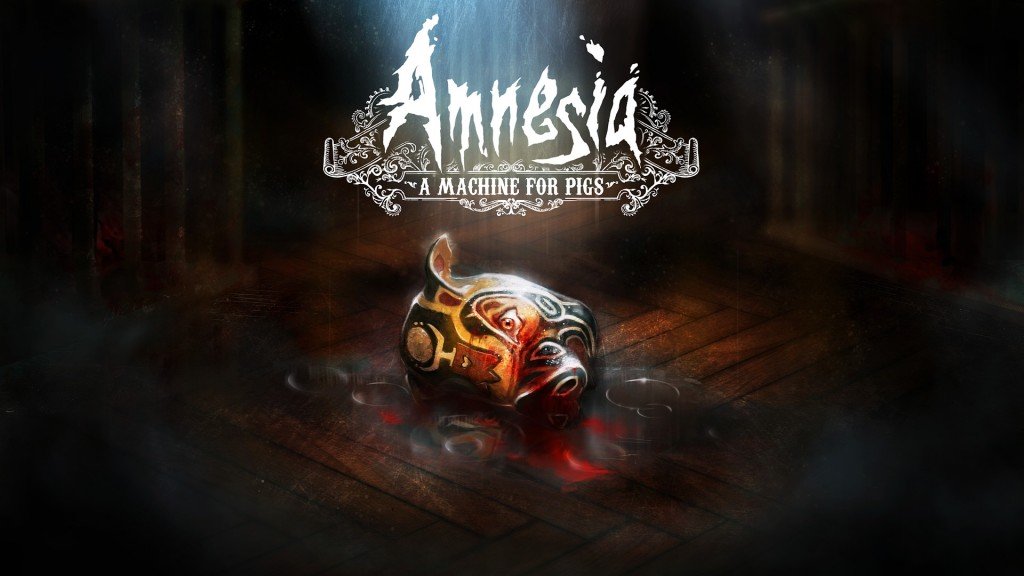 Suspension of belief is a fascinating concept, routed solely in that unique act of balancing just enough exposition to warrant exploration and discovery, yet keeping the juiciest revelations at a certain distance until the big finale. Sequel to first-person horror Amnesia: The Dark Descent, Pigs attempts to walk this line with varying degrees of success, predominantly failing to illicit any lasting response other than mild confusion midst a general feeling of nausea upon completion.

That’s not to even begin to say that this is a bad game, or an ineffective one, far from it. Pigs‘ sound design is utterly exquisite for one, as is the voice acting and atmosphere, but firstly it’s important to touch upon the bare-bones narrative that exists to push you through the increasingly dank and disgusting locales developer The Chinese Room have put together. This review will remain spoiler free, as Amnesia does not have much else going for it outside of creating a very compelling drive to explore, thus the requisite answers that come with drip-feeding the player information about their surroundings is the sole recommendation for this installment of the franchise. 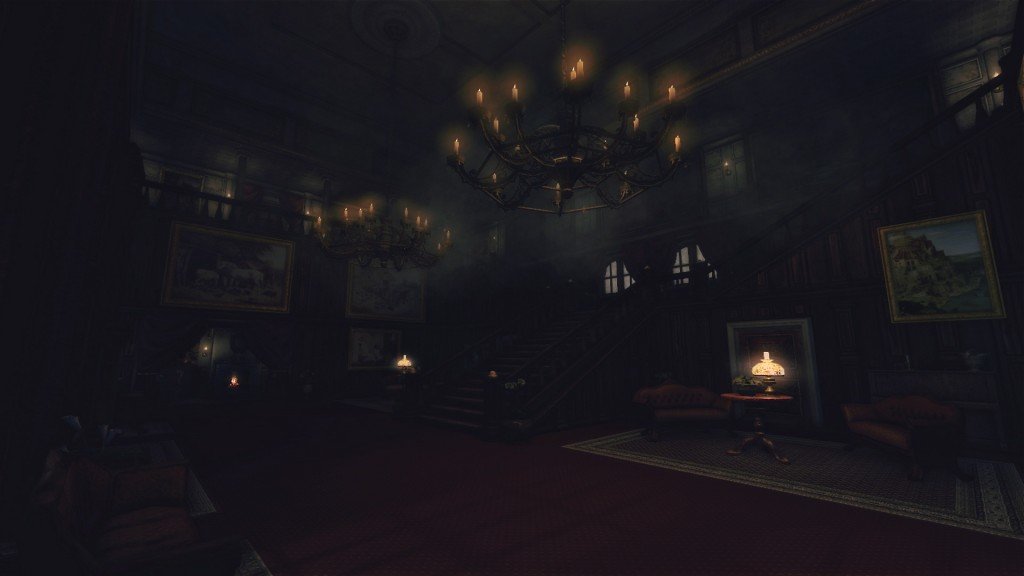 “My father’s house has many rooms, and as for mine…well, it also has its secret chambers”

You are Oswald Mandus, 19th Century Victorian England-era businessman, and you awake in a dilapidated mansion awash with creaks, distant footsteps and echoed screams. You have your journal, a very soon-to-be-acquired oil lamp, and the ability to jump, crouch and sway, yet this is all you will ever have. It quickly becomes apparent that Mandus is a father missing his two children somewhere inside the house, and as you venture deeper and deeper into the bowels of the ancient chasms that run underneath, the game opens up to reveal there is much more going than two children playing hide-and-seek.
That being said in the latter half of the game, the built-up atmosphere of broken doors, steam-cloaked streets and open hallways gives way to a much more industrial environment, and with the inclusion of yet another sewer level (what is it with game designers including sewer levels?) progressing through the games’ defined levels becomes something of a slog.

It’s a slog exemplified by the fact that Amnesia does not play particularly well, with the overall movement behind Mandus feeling somewhat sluggish. Although such an approach is most likely intentional for the genre, forcing you to amble through the environments breathing in the wretched underground stench of decay and effluence, it does take you out of the experience when all you want to do is turn tail and run. As the games’ sparse amount of enemy encounters become more commonplace whilst you delve deeper and deeper towards the titular Machine, engaging in any meaningful way outside of awkwardly shuffling away for your life is the order of the day. 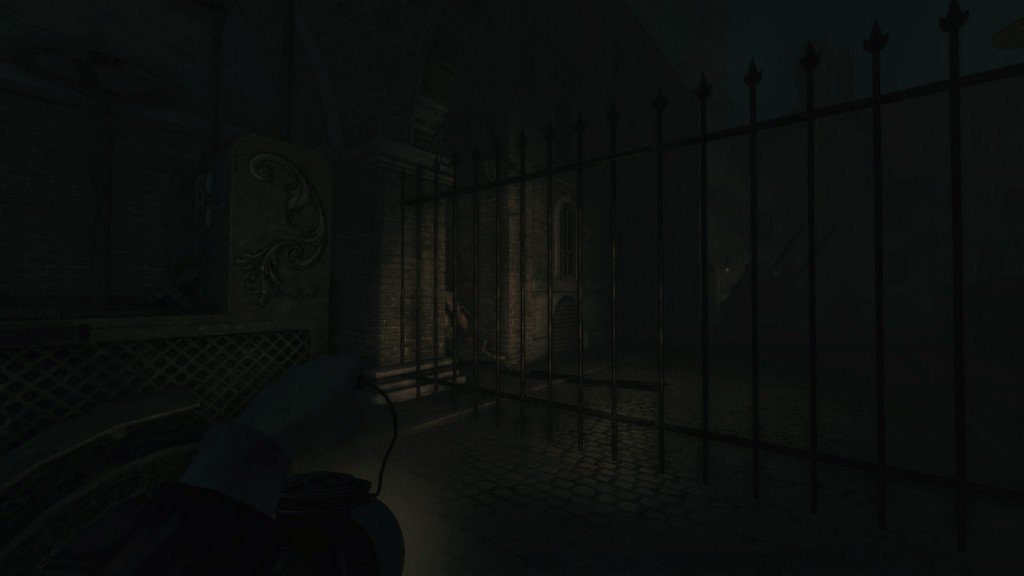 What’s that darting off into the alleyway? Do you want to find out?

Back to the exquisite sound design, and overall level design, as Amnesia takes it’s time to reveal its hand, letting all manner of creatures and demons fill your mind as you explore deserted rooms and factories. Personally though, when the reveal does come and you’re free to let the enemy approach, whilst this was genuinely an unsettling experience, the ‘Nearly-Man‘ as it is referred to, is very poorly animated. It’s possible this reinforces the somewhat abstract nature of the story, being that Mandus is often slipping into a dreamlike state, yet the fact remains that for what is such an unbelievably effective buildup, the grand reveal remains a bit of a stumble if the time is taken to actually watch the creature in motion.

However with a bit of distance between you and the enemy, the game makes perfect sense. Nearly-Man‘s sounds and screams echo all around in the many encounters where suddenly you find yourself stuck in a room with ‘it’, shrouded in darkness with nothing but your flickering lantern to light the way forward. Turn the lantern off and you can potentially pass unheeded, yet quickly ignite its all-seeing flame to make sure you’re heading the right way, and all hell descends upon you once again.

Something isn’t right about this room.

In these instances, Amnesia is horror personified.

With a supremely detailed graphics engine that sheds just the right amount of light from your little lantern onto rusty gates, cobbled streets or decommissioned machinery, often paranoia sets in as you’re SURE you saw something flicker in the distant darkness, only to turn around and be confronted by the very thing you were trying to avoid. For that alone, whatever quibbles you may have with the story’s resolution, rest assured the path towards it is paved with jump-scares and sleep-depriving imagery.

A Machine For Pigs tells its tale via a small alternating selection of outputs. Alongside the plethora of notes you’ll stumble upon, Mandus makes frequent journal entries to guide himself on his quest should you get stuck. As well as this you’ll often receive random phone calls, and have the ability to flick on gramophones that have some key conversations recorded, all serving to whet the mysterious nature of your actions and their surroundings.

It’s not a particularly long or arduous game to get through, instead in a similar vein to Gone Home, this is most definitely a ‘quality over quantity’ experience. Amnesia is a game most suited to horror fans or those with a penchant for the alternative story-wise, and with Slender Man dominating the genre, it’s about time someone stood up and took him on.

This review is based on a review copy of the Mac OS version of Amnesia: A Machine for Pigs developed by The Chinese Room published by Frictional Games.

Did you like this? Share it:
The Nearly-Man cometh... | Amnesia: A Machine for Pigs Review
Overall Score7
Positives
Negatives
7Overall Score
Reader Rating: (0 Votes)
0.0